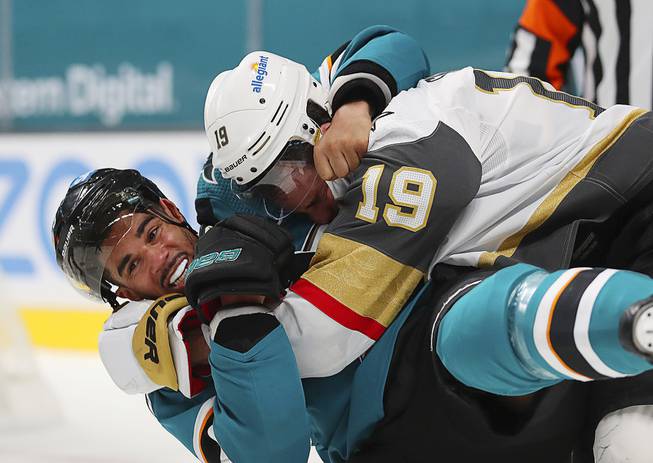 Drama reigned in the postgame after the last meeting between the Golden Knights and Sharks. San Jose coach Bob Boughner publicly expressed displeasure with a Jonathan Marchessault hit that injured Sharks defenseman Radim Simek, and Alex Tuch warned longtime antagonist Evander Kane to watch his back the next time they play.

No matter what anyone says, the rivalry between the Golden Knights and Sharks remains heated. Vegas will make its second trip of the season to San Jose today when the teams meet at 7:30 p.m. at SAP Center.

No fireworks are guaranteed but it’s never entirely peaceful when these rivals share the ice.

“Same as it usually is,” Vegas forward William Karlsson said on Feb. 24. “I think the rivalry is still there. They want to win and we want to win. That’s what I expect. It’s going to be a hard-fought battle.”

That was from a day before the Golden Knights were scheduled to travel to San Jose for a game that was later postponed. Vegas had an off day Thursday and were not available to comment on San Jose — which might be all the better from coach Pete DeBoer’s perspective. The rivalry doesn’t need any more enflaming.

Its origins go back to the inaugural season and the second-round playoff series between the team, which Vegas won in six games. The rivalry reached a new level in 2019 when the Sharks won a heated and controversial seven-game series to carry animosity into next season.

There was a thought that it might be over now. DeBoer was the coach of the Sharks during the genesis and early peak of the rivalry and is now on the opposite bench, and both squads have a number of players who weren’t around for the playoff series.

Marchessault even said before their first game of the year he thought the tension had cooled.

Then they met and things got heated again. Marchessault put two hits on Simek in response to the latter initiating contact with Reilly Smith. Marchessault’s second hit on Simek, a cross-check to the ribs, sent Simek to the locker room. The Sharks’ defenseman didn’t return to the game after that.

Marchessault was neither penalized in the moment nor later from the NHL Department of Player of Safety, which can dole out supplemental discipline. Boughner was unhappy with both the hit and his team’s response.

“The initial hit you can argue is a little bit high, but I think it’s the nature of the hit, I think it was retaliatory,” Boughner said according to the San Jose Mercury News. “I thought that (Simek) was physical on Smith on the first shoulder-to-shoulder puck battle. It looked like Marchessault came in, keying on Simmer and the hit.

“Again, my issue is more the second time around when Simmer was already stung that he came in and added insult to injury, and that’s on us. I mean, it looked to me like someone taking a shot at one of our players and I didn’t like our response. That’s something we are addressing.”

Later in the game, Kane put a hit on Smith that angered the Golden Knights. That’s what prompted Tuch’s postgame comments on AT&T SportsNet that Kane should be ready for the next game.

“I know he’s going to have to keep his head up every game we play,” he said on the postgame. “The next seven games we play Evander better be looking over his shoulder.”

Kane is seemingly always in the middle of scraps. His personal feud with Vegas forward Ryan Reaves is the public face of the rivalry. Their back-and-forth spilled over to social media and led to a Game 3 fight in the 2019 playoff series.

In their meeting earlier this season, the two took simultaneous penalties and jawed at each other on their way to the box and once they got there.

Keeping all of that in mind, it’s fair to expect some bad blood to boil over today. But DeBoer hopes cooler heads will prevail.

“I think part of that is media-driven,” DeBoer said on Feb. 24. “I think somebody’s trying to create something out of nothing, but we’re a team that can play any way you to play, so we’re in there to try and win a hockey game.”