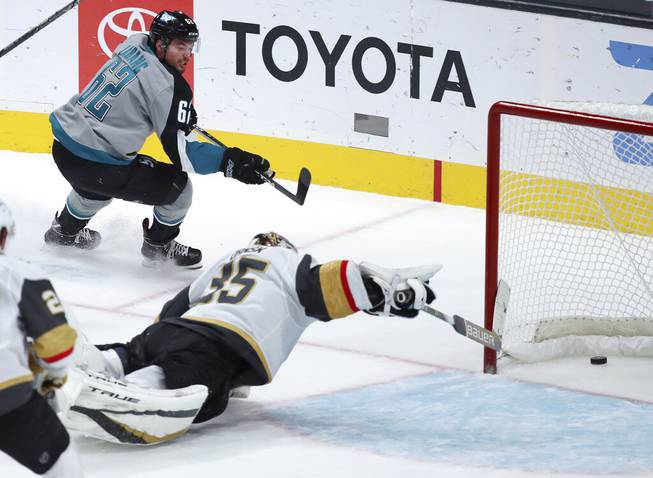 Through ups and downs, Oscar Dansk picks up first Golden Knights win since 2017

Since they won the game, it will likely be forgotten soon that the Golden Knights needed overtime. But Friday’s game could have been disastrous if not for Max Pacioretty’s third overtime goal of the season.

Goalie Oscar Dansk, making his first start in over a year, misplayed a puck with 67 seconds remaining in the third period to allow the Sharks to tie the game. It forced an extra period, but Pacioretty’s goal 1:25 into overtime, his second of the game, made sure that a 5-4 victory is all that will be remembered from SAP Center.

“I know it’s been a while since I’ve played in this league, like a year or so, so I don’t expect it to be a perfect game and it rarely is,” Dansk said. “You’re going to face challenges and that was a challenge in itself. I really just had to own up to it and go play again. There’s no other option and try to help the team once again.”

It was tough to watch the puck bounce over the stick of Dansk, a player making his first NHL appearance since Oct. 21, 2019. Before that, his last outing was two years prior and his last win was on Oct. 27, 2017. Overall, it was just his sixth NHL appearance.

Before the final play of the third, he had turned in a solid outing. He wasn’t perfect, but made the saves he needed to, including a big one on Patrick Marleau with 3:16 remaining in the third and with his team short-handed.

Then as time wound down, Brent Burns floated a puck from the defensive zone down the ice. Normally the goalie takes a step out of the crease and whacks the puck away from danger, but it bounced on Dansk, and Kevin Labanc was there for the game-tying goal.

“We told him not to worry about it. Stuff happens,” defenseman Alex Pietrangelo said. “Breakdowns happen and it’s how you pick each other up.”

The Sharks called a timeout and Dansk skated to the bench, where he was met by a supportive team. He retook the net and didn’t need to make a save for the rest of regulation and was called upon just once in overtime before Pacioretty sent him and the Golden Knights back to the hotel as victors. Dansk made 25 saves.

“I think the guys wanted to play hard for him and wanted to find a way to get a win for him,” coach Pete DeBoer said. “Unfortunate bounce there at the end, but guys dug deep and the most important thing was he found a way to win.”

It was clear how much the win meant not just to Dansk, but the Golden Knights. He rejoined the team last summer in the postseason bubble after most of the year in the AHL and practiced nearly every day with the team. He did the same in training camp when this season started, and spent the first month as part of the NHL taxi squad.

He was assigned to AHL Henderson on Feb. 23 to get him into some games, and he turned in three solid outings with the Silver Knights, his first game action in nearly a year.

If everything went according to plan for the Golden Knights this season, he may never have seen the ice. Vegas was set with a goalie tandem of Robin Lehner and Marc-Andre Fleury coming into the year, and that worked for a while. Once Lehner went down, the Golden Knights rode Fleury as long as they could, but couldn’t play him every night. After 10 consecutive starts, Fleury sat and Dansk took the net.

“Stuff like this goes such a long way, much more than I think the outside even knows,” Pacioretty said. “Within the room, guys like that you just want to win for and we’re happy that guys like that stepped up tonight.”

Dansk’s last NHL start was a disaster. He gave up six goals to the Flyers in 2019 and wasn’t seriously considered for another until recently. At 27 years old, he’s not a young goalie prospect anymore.

So he’ll remember Friday’s win. It wasn’t quite how he drew it up, but Dansk is a living testament to how hard it is not just to make it to the NHL, but to stay there too. He wasn’t in the mood to do any complaining after his first win in 1,225 days.

“Obviously it felt unbelievable,” Dansk said. “It was an unfortunate play and I’ve got to be better than that, but that’s team sports. We help each other out. I’m really happy about it and glad we got out of there with a win.”