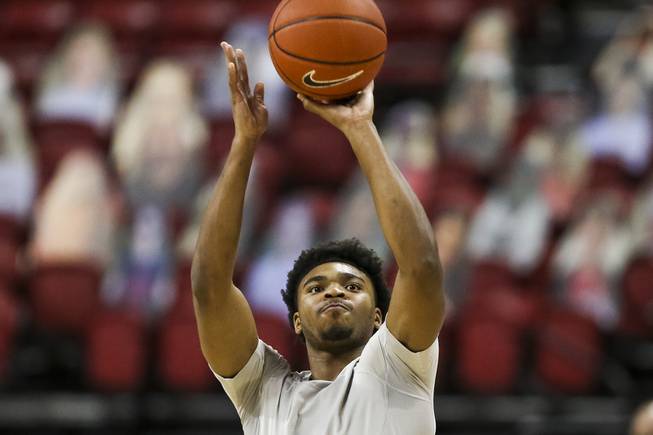 From a fan’s perspective, UNLV’s makeup game at Wyoming today (6 p.m., CBS Sports Network) probably seems like a vestigial contest that was tacked on to the end of the schedule simply to fulfill the Mountain West’s contractual obligations. But for UNLV, there is a bit more riding on the regular-season finale.

A look at why you should care about UNLV at Wyoming:

There isn’t a lot of wiggle room left in the Mountain West standings, but this final game could still end up meaning a lot for UNLV’s tournament path.

As of now UNLV is in seventh place with an 8-9 conference record. They can’t fall any lower, but they could potentially move up to sixth if they win at Wyoming and sixth-place Fresno State (9-10) loses to Utah State.

The sixth seed appears to be the preferable landing spot for the scarlet and gray, if you look at how the bracket would shake out if the season ended today. From the No. 6 slot, they would face No. 11 New Mexico (a team UNLV swept) in the play-in round, then take on No. 3 Utah State in the quarterfinals. UNLV split with Utah State each of the last two seasons, so that’s not an unwinnable game.

An upset of Utah State would put UNLV in the semifinals, likely against No. 2 seed Colorado State. UNLV lost twice at CSU this season, but both games went down to the wire.

If UNLV were to lose the finale to Wyoming, the tournament path is less friendly. As the No. 7 seed they’d have to take on Air Force in the play-in round, and fans surely remember that AFA pushed UNLV to the brink in two games at the Thomas & Mack Center a month ago.

Brackets are unpredictable and nothing is set in stone yet, but UNLV would be doing itself a big favor by beating Wyoming, locking in the No. 6 seed and parlaying it into some favorable matchups in the Mountain West tourney.

UNLV needs Bryce Hamilton to perform like an All-Mountain West player, but the junior guard has been in an epic slump for the past several weeks. In the last six games Hamilton is shooting 35.9 percent (42-of-117) and he’s down to an inefficient 42.2 percent from the field on the season.

Shot selection has been a big problem. Last year, 34.7 percent of Hamilton’s shots came at the rim and 38.9 percent were 2-point jumpers; this season he’s only getting to the rim 22.6 percent of the time and shooting mid-range jumpers 49.3 percent of the time. It’s almost impossible to be efficient with that kind of shot distribution.

The numbers would seem back up Otzelberger’s season-long assertion that teams are converging on Hamilton and sending help defenders to keep him from driving. Twenty-four games into the season, Hamilton still hasn’t figured out how to deal with the extra defensive attention.

“Teams are well aware of his ability to score the ball, particularly driving left and getting into the paint and spin and all the creative things that he does to create scoring opportunities,” Otzelberger said after Hamilton shot 2-of-10 on mid-range jumpers against San Diego State. “We’ve got to try to find that balance, because teams are very aware of his ability to score, and…he’s getting a second and a third defender collapsing on his drive. He’s got to be a willing passer when they do that, and we’ve got to find ways to fee him up and create scoring opportunities as well.”

The finale at Wyoming will give UNLV one last chance to give Hamilton those kind of drive-and-kick reps that could push the offense in the right direction.

Otzelberger has spent all season trying to hammer out an offensive identity without a true primary ball-handler. Hamilton’s declining production is just one example of how the offense has struggled without a point guard, while David Jenkins thinks the entire team needs to work on being more patient in the halfcourt.

Jenkins wants to see UNLV mine each possession for maximum value.

“Value every possession,” Jenkins said after scoring 32 points against San Diego State. “In our offense, making sure we either get an early shot in transition or grind the shot clock down and we get a later shot. I feel like valuing possessions, going into this next game and going into the conference tournament is going to be huge for us. I feel like overall we play really good as a team when we’re doing things like that.”

Wyoming is not a particularly slow-paced team, as the Cowboys rank No. 122 in KenPom.com’s adjusted tempo, so that should be good practice for UNLV holding the ball, working the offense late into the shot clock and grinding out good shots as the clock tick down.

Last year UNLV appeared to be peaking at the right time, cruising into the Mountain West tournament on a season-ending five game winning streak. Then, with just minutes left in a blowout win in the finale at San Jose State, starting guard Elijah Mitrou-Long injured his knee and was lost for the year.

Like last year, UNLV isn’t good enough to rest players; Otzelberger needs to play his guys and try to win the game. But at the same time, UNLV certainly isn’t deep enough to withstand any injuries to any of its seven rotation players, so they’ll hold their breath for 40 minutes and hope to go into the postseason with the healthiest roster possible.