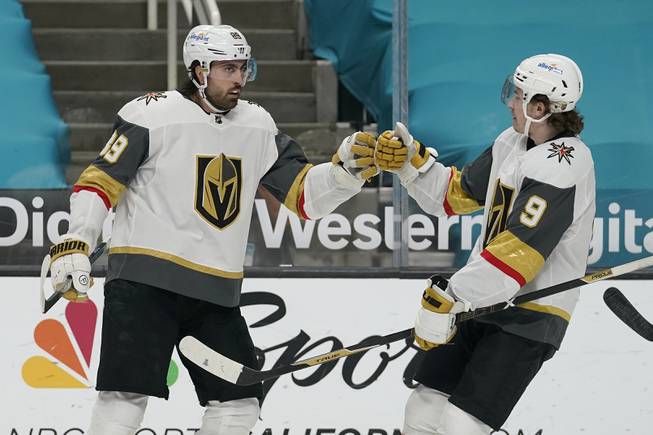 The Golden Knights suffered the most heartbreaking and controversial loss in their history at SAP Center in San Jose in the playoffs two years ago. They’ve apparently decided to never lose there again.

Alex Tuch scored twice on Saturday and Marc-Andre Fleury posted a 24-save shutout to power the Golden Knights to a 4-0 victory over the Sharks. Since that Game 7 loss in 2019, Vegas is unbeaten in five games at SAP Center.

With the win Saturday, the Golden Knights have more wins this season at SAP Center (3) than the Sharks do (2).

In fact, the Golden Knights haven’t spent a lot of time losing to the Sharks at all during the regular season. Vegas is 11-1-3 all-time against the Sharks, and 7-0-2 in San Jose.

It’s become very one-sided, and with the Golden Knights leading the West Division and with the Sharks at the bottom, it begs the question: Is this still a rivalry? One prominent Golden Knight and common San Jose agitator isn’t so sure.

“We used to have a pretty good rivalry, but now it’s not as powerful as it was the two first years,” forward Jonathan Marchessault said. “It’s always good to get a win. Obviously we came here and took care of business and it’s a great start to our road trip.”

It’s interesting to hear Marchessault say that, considering he said something similar before the teams’ first meeting of the year and that game became the target of the Sharks ire.

Other players still like beating the Sharks. Tuch called it a “huge rivalry” and said it’s more fun than a normal win. Vegas’ veteran goalie also pointed out that while the regular season numbers may be slanted, the postseason meetings are even.

“I feel like in the playoffs they won one and we won one so to me that’s still in the back of my head when we play them,” Fleury said. “We’re at the top of the standings and they’re at the bottom and maybe because of that, the rivalry isn’t as strong as it used to be, but in my mind it’s always nice to win against them.”

Then there’s Pete DeBoer, the Golden Knights coach and former Sharks bench boss who has been the only one so far to cross the line in the sand. When asked how he views the rivalry between his current team and his old one, he was understandably diplomatic.

“I think both teams get emotionally charged up for the game,” DeBoer said. “I think the characters on both teams ramp that up — obviously Kane for them and for us Reaves and our group. I think when you have that on each team and the history they have, regardless of where the season standings are, the games get emotional at ice level and those verbal wars usually drag guys into battles and that usually carries into the play. I think it’s still there.”

Saturday’s game didn’t have the same emotion as Friday’s, and the Golden Knights controlled from bell to bell.

Tuch was the biggest driver of offense, scoring two unassisted goals. Mark Stone scored the first one, then two second-period goals by Tuch gave him 12 on the year, tied with Max Pacioretty for the team lead. He has scored in four straight games and has eight goals in his last seven games.

On the other end, Fleury was fantastic once again. He sat for the first time 10 games on Friday, and picked up right where he left off with his fourth shutout of the season. He denied a San Jose breakaway in the first period, and Stone connected with Chandler Stephenson for Vegas’ first goal on the ensuing rush.

That was the last good news for Stone, as he left the game midway through the second period and did not return. DeBoer called the move “precautionary,” as the team saw no need to push him with a 3-0 lead.

Reilly Smith added the fourth goal of the game at 11:03 of the third period, his second game in a row with a goal. It was also his 20th career point against the Sharks, tied for the most against any opponent.

“At the beginning of the season, we got away with a couple wins there, but I think our game is pretty strong right now,” Marchessault said. “We’re all on the same page system-wise, we know if we don’t have success what we’ve done to not have success and we correct it.

“Overall our game is pretty good and we should be pretty confident.”