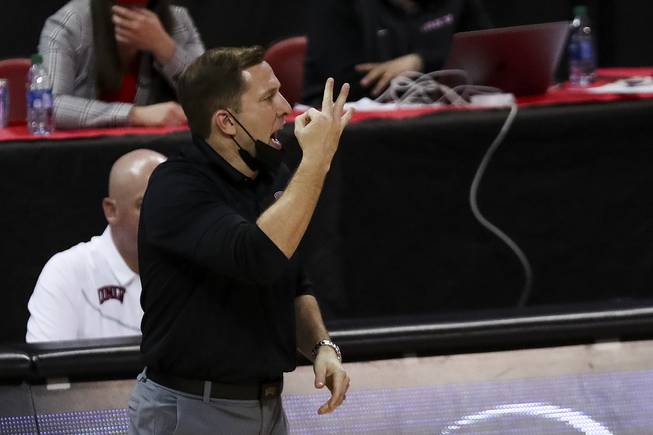 Last year at this time, UNLV was heading into the Mountain West tournament on a five-game winning streak and had taken on the distinct look of a team capable of claiming the league title.

What a difference a year can make.

Instead of peaking at the right time, the 2020-21 squad cratered in Saturday’s regular-season finale, turning in their worst performance of the year in an 80-69 loss at Wyoming.

The defeat dropped UNLV to 8-10 in the Mountain West in T.J. Otzelberger’s second season on the job. They are the No. 7 seed in the MWC tournament and will face No. 10 Air Force in Wednesday’s play-in round.

Otzelberger pointed to an offseason lost to COVID-19 as the biggest impediment to the program’s progress.

“We had really good momentum ending the season last year,” Otzelberger said. “Our guys were starting to build the championship-level habits that we needed to have. And then that momentum was taken away from us by not having postseason workouts and summer workouts and fall workouts like we would normally have.”

Wyoming came ready to play on Saturday and buried 6-of-10 from beyond the arc in the first half, while UNLV started sluggishly and made just one 3-pointer in the opening 20 minutes. UNLV’s most effective offense was posting up Mbacke Diong; the senior center scored on his first three post touches, but quickly fell into foul trouble and went to the bench after logging just 11 minutes.

Wyoming took a 43-34 lead into the break, then pushed the lead to 18 points early in the second half on the strength of an 11-0 run, capped off by back to back 3’s from center Hunter Thompson.

Wyoming had no issues defending the limited attack of the scarlet and gray. UNLV suffered through a seven-minutes stretch with just a single field goal, during which time the Cowboys upped their lead to 63-42 with nine minutes to play.

Bryce Hamilton led UNLV with 17 points on 7-of-12 shooting.

Wyoming took advantage of UNLV’s inability to cover the 3-point line by making 10-of-20 from deep. The Cowboys shot 55.1 percent as a team and had four players in double figures, led by Graham Ike’s 17 points.

UNLV finishes the regular season with an 11-14 overall record, but even after watching his team lose both makeup games this week, Otzelberger said his players still believe they can turn it around before Wednesday’s game against Air Force.

“You still have to have a short-term memory and get ready to play,” Otzelberger said. “I think our guys believe and know that we can compete and beat anybody in the conference tournament.”