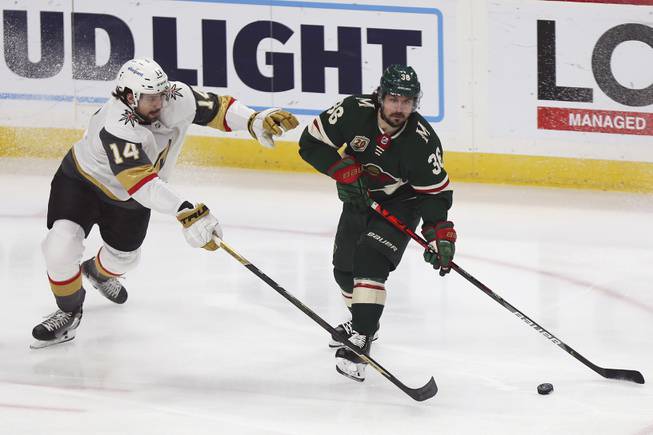 Last week the Golden Knights scored 10 goals in two games against the Wild at T-Mobile Arena. It looked like they finally conquered their old nemesis, but they hadn’t faced the Wild at Xcel Energy Center yet.

Entering play Monday, the Golden Knights have scored five non-shootout goals ever at the Wild’s home rink, the fewest of any venue they had visited at least four times. They did not add to that total in the game, falling to the Wild 2-0.

“We don’t really look at the stats from last season or if we won or not here,” goalie Marc-Andre Fleury said. “It’s a new game, always important to win that game and also I think tonight they defended well, capitalized early in the game and we just couldn’t get it back. Close game all night long.”

Without the pair, Vegas struggled to get the offense going, especially early. The Golden Knights registered the first two shots of the game, then gave up the next 10, including Minnesota’s first-period goal. Vegas went almost 11 minutes between shots on goal.

“Our entire first period we made some poor puck decisions as far as turnovers went, and their goal was a direct result of the turnover,” coach Pete DeBoer said. “When we cleaned that up over the last 40 minutes, I thought we did some good stuff.”

As DeBoer alluded to, the Golden Knights did the same to the Wild in the second period, holding Minnesota shotless for the final 11:18 of the period. Vegas finished with a 26-21 edge in shots on goal and controlled play after the first period.

But the Wild had already scored, and Vegas never did. Minnesota connected at the 10:51 mark of the first period, capitalizing on a Keegan Kolesar turnover and creating a 2-on-1. Victor Rask broke Kevin Fiala out of the zone, then Fiala fired the puck far-side over Fleury’s blocker.

Minnesota was later awarded a goal with six seconds left in the game, after Jonas Brodin was slashed on a breakaway against an empty Vegas net. But that was it for the offense.

“That’s a good team and you’re not going to put up five every night,” forward Max Pacioretty said. “There was an opportunity tonight for some guys to step up with some bodies out of the lineup rolling out some new lines and some pairings, but we’ve just got to be 5-10% better to try and make that extra play.”

Even Fleury wasn’t challenged that much. He turned in another strong outing — his ninth in 15 games allowing one goal or fewer — but only had to make 20 saves. The Wild’s power play was dreadful, spending more time chasing the puck than controlling it, and Fleury did not have to make one short-handed save.

“I don’t think we got outplayed that bad,” Fleury said. “We still had a chance to win that one.”