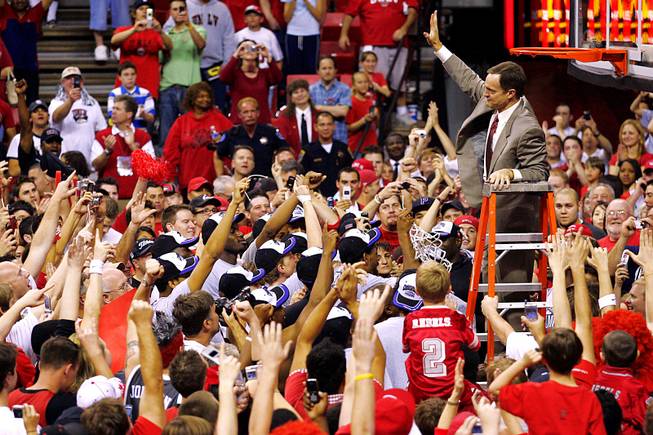 UNLV’s recent history in the Mountain West tournament has been tragic.

Things started out great. The league formed in the 1999-2000 season, and UNLV won the inaugural tournament championship under Bill Bayno. The scarlet and gray then claimed back-to-back crowns in 2007 and 2008 under Lon Kruger.

Those turned out to be the glory days; since that time, the MWC tourney has been nothing but misery for UNLV, as four different coaches have tried and failed to cut down the nets.

Hope springs eternal, however, even as this year’s team is enters the postseason on a down note with an 11-14 overall record and an 8-10 mark in league play. It only takes one hot streak for March magic to happen, and when it comes to the Mountain West tournament, stranger things have happened.

7 — Different teams that have won the conference tournament since UNLV last claimed the title, including one school that is no longer in the Mountain West (Utah, 2008-09). The other winners have been San Diego State (three times), New Mexico (three times), Utah State (twice), Wyoming, Fresno State and UNR.

171 — UNLV’s KenPom.com ranking entering the postseason. The lowest ranked team to win the Mountain West tournament was Wyoming (No. 131) in 2014-15; that Cowboys squad relied on a glacial pace of play to disorient opponents and went 11-7 in league play behind do-everything guard Josh Adams.

3 — UNLV’s current losing streak in the league tournament. The last win was an overtime play-in game against Air Force in 2017-18; the scarlet and gray have been one-and-done in each of the last two seasons.

8 — Seasons since UNLV advanced as far as far as the semifinal round. Entering as the No. 4 seed in 2013-14, Dave Rice’s squad avoided the play-in round and beat No. 5 Wyoming in the quarterfinals before falling to No. 1 San Diego State in the semis.

6 — Consecutive MWC tournament games UNLV has lost to better-seeded teams. The last time the scarlet and gray pulled an upset was 2012-13, when No. 3 UNLV topped No. 2 Colorado State in the 2012-13 semifinals before losing to No. 1 New Mexico in the final. That was also UNLV’s last NCAA Tournament campaign, as they finished 25-10 overall and earned an at-large bid.

1 — Current players who have won a MWC tournament game while at UNLV. Mbacke Diong, a freshman at the time, logged eight minutes in a play-in win over Air Force in 2017-18; he contributed two points, two rebounds and one block as UNLV edged Air Force in overtime. No other current player has been part of a UNLV team that won a Mountain West tournament game.

.571 — UNLV’s winning percentage in the conference tournament since the Mountain West moved the event to the Thomas & Mack Center in 2007. The scarlet and gray won the first two tourneys in Las Vegas with a combined 6-0 record and have gone 10-12 since then. Some home-court advantage.

3-1 — UNLV’s combined record this season against Air Force (2-0) and Utah State (1-1). If the scarlet and gray can take care of AFA in Wednesday’s play-in round, they’ll advance to face No. 2 seed Utah State in the quarterfinals. It’s not a bad draw for No. 7 UNLV, all things considered.