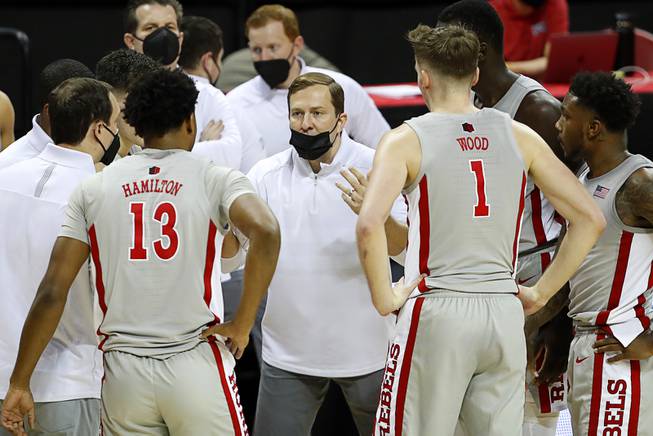 UNLV Rebels head coach T.J. Otzelberger talks to players in the final minutes of a game against the Fresno State Bulldogs at the Thomas & Mack Center Friday, Feb. 26, 2021.

The scarlet and gray are treading a familiar path this week.

It has become something of a theme for the UNLV basketball program over the last decade: Put together one of the best rosters in the Mountain West, underperform during the regular season, then hope to salvage everything with a Cinderella run in the conference tournament.

Dave Rice’s teams followed that formula, Marvin Menzies’ squads repeated it, and now, hours ahead of UNLV’s play-in game against Air Force today (1:30 p.m., Mountain West Network), T.J. Otzelberger is hoping his crew can bounce back from only the fifth sub-.500 season in school history to make a run in March.

Otzelberger certainly didn’t think his team would be in a similar position to those previous underachieving UNLV teams. In his first year on the job, Otzelberger guided a team of overachievers to a 12-6 record in league play (tied for second place), and only a badly timed injury stopped that squad from making a legit push for the tournament championship.

The 2020-21 UNLV team added former South Dakota State star David Jenkins to that mix, and with Bryce Hamilton coming off an All-Mountain West campaign as a sophomore, it looked like the program was finally poised to break through and return to the NCAA Tournament under Otzelberger.

It was not to be.

A number of factors contributed to UNLV’s poor regular season. Otzelberger brought in six true freshmen to round out the roster, and the COVID-truncated offseason kept them from gaining valuable experience before the games began. It took Jenkins a while to get acclimated to the Mountain West and while his outside shot has come around (41.2% from 3-point range), he has been inconsistent from game to game. Hamilton regressed from his breakout campaign and shot only 42.7% from the field.

Maybe most damaging, the team has struggled mightily on the defensive end. From opening night, when Montana State shot 55.6% and scored 91 points in handing UNLV a home loss, to the season finale, when Wyoming shot 55.1% in beating them 80-69, the scarlet and gray just have not been able to guard the ball.

“We’re not seeing the progress that we would like to have,” Otzelberger said. “I’ve not been happy. I’ve seen us progress in those areas in practice, but it hasn’t come out in the game the way we’d like.”

So what would lead anyone to believe, after years of watching talent-rich UNLV teams repeat this pattern, that this year might be different?

Perhaps the do-or-die nature inherent to the conference tournament will spark something inside a UNLV team that has tended to play up — or down — to its opponents.

Otzelberger is still waiting for his team to put together a full 40-minute performance against a good team.

“To be honest, I’m seeing glimpses in stretches,” Otzelberger said. “I’m not seeing a completion in continuous production and that’s what we see in the games. We have these lulls and these stretches that put us in a tough spot. More than the X’s and O’s or the scheme and the strategy, I think that’s attributed to our overall maturity as a team. We play to these highs and these lows depending on the opponent and the situation.”

As fortune would have it, UNLV’s path in the opening rounds of the MWC tournament is relatively manageable. They swept a two-game series against play-in opponent Air Force in February, and if UNLV can make it three on Wednesday they’ll advance to face No. 2 seed Utah State on Thursday. The scarlet and gray played Utah State tough this season and split the season series one game apiece. So it’s not difficult to plot out a scenario in which one upset victory lands a suddenly hot UNLV team in the semifinals.

Otzelberger has seen it happen, and as an example pointed to last year’s Wyoming team, which finished in last place (2-16 in MWC play) before springing two upsets and reaching the conference semifinals.

“I’ve experienced it directly, where you get that win and the confidence and the enthusiasm and the belief can certainly pick up,” Otzelberger said. “I’ve experienced that as a head coach, as an assistant coach and I’ve seen the momentum be real. With young people their confidence can kick in at any point.”

A lot of things will have to go right in order to get there, and then even more will have to break UNLV’s way in order to potentially advance beyond that point. Shooters like Jenkins, Caleb Grill and Moses Wood (a group that combined to make 37.4% from 3-point range this year) will have to get hot together and stay hot. Hamilton will have to rediscover his 2019-20 form. And the coaches will have to devise a way to keep everyone afloat on the defensive end.

It’s an unenviable position, and it’s not where UNLV expected to be when the season began. But once again, the program finds itself hoping to make up for a seventh-place finish with a redemptive postseason run.