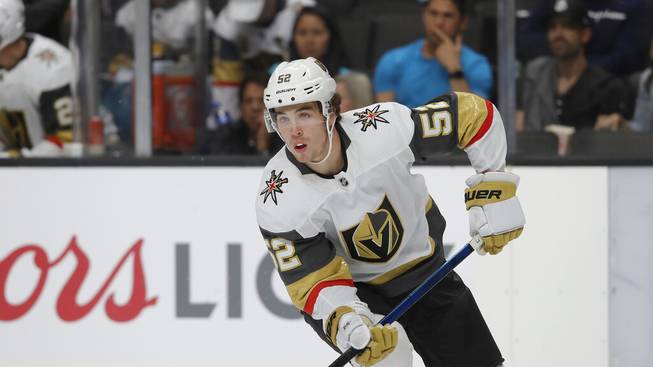 The third period of Wednesday’s game saw a Golden Knights defenseman record a hat trick, the pulling of a goalie with five minutes left in the game, and Vegas almost come back from a three-goal deficit. All that was missing was the win.

Vegas allowed three goals in the third period and almost got them all back. Dylan Coghlan scored all three goals, the first three of his career, in a 4-3 loss to the Minnesota Wild at Xcel Energy Center.

“I wish we could have got the win. That would have been the icing on the cake,” Coghlan said. “My first goal, and I was lucky enough to get two more after that. It’s definitely a night I’ll remember for the rest of my life.”

Coghlan’s hat trick was the first by a defenseman in Golden Knights history and the eighth overall.

It was also the first time this season Vegas was swept in a two-game series after it fell to the Wild on Monday night.

The game went into the third period in a 1-1 tie looking like any other game. Then the Wild flooded the Vegas net with goals by Kirill Kaprizov, Joel Eriksson Ek’s second of the game and Carson Soucy, and Minnesota led 4-1 with 12:19 to play.

Coach Pete DeBoer said pulling Fleury was “strictly” about him being ready for games on Friday and Saturday. Robin Lehner is returning soon, at which point the Golden Knights can return to their usual goalie rotation, but DeBoer wanted to get Fleury some rest in what had become a 4-1 game.

“He’s played a lot of hockey,” DeBoer said of Fleury. “It was a chance to get a young guy (Thompson) into a game so if he does get a start down the road, it’s not going to be all brand new for him. But the underlying motivation was to get (Fleury) 10 minutes less hockey and a few less shots going into the weekend.”

While resting Fleury, it also seemed to reinvigorate the visitors. Coghlan, who scored the first of his career in the first period, scored his second with six minutes remaining in the game in a 4-on-4 situation. Shortly after, with the game still at 4-on-4, Vegas pulled Thompson to get what was essentially a power play.

The Golden Knights returned Thompson to the net when the game returned to 5-on-5, but pulled him again soon after. And with 2:10 remaining in the third, Coghlan wound up and blasted the puck home to complete the hat trick.

“I’ve had a couple close calls in junior, but a hat trick I haven’t had since I was 10 probably, or even younger,” Coghlan said.

Thompson went back to the net for the draw but skated to the bench for the third time in the period as the Golden Knights tried to get one more goal. They almost did too, but Alex Tuch’s shot went wide of the net with 12 seconds left and the Wild escaped with the win.

As thrilling as the third period was, it masked what was a shaky game from Vegas offensively for 54 minutes. Eriksson Ek started the scoring for the Wild 19 seconds into the game and Coghlan answered 1:23 later, but Vegas’ offense was absent for most of the night.

“We didn’t break the puck out well, we didn’t didn’t transition the puck well, we didn’t make proper plays in the O-zone, we just didn’t get any sustained zone time,” forward Mark Stone said. “Our execution was trash.”

One positive of the night was Thompson, who before this season had played one game above the ECHL level in his career. He was spectacular in seven starts with the Silver Knights this year, and his appearance tonight was the culmination of a long and winding road for the traveled goalie.

The other positive was, of course, Coghlan. His night was historic even outside of Golden Knights context, becoming the third defenseman to score the first three goals of his career in the same game. The last time was 1984, and before that, 1918.

“I thought he came in and did a great job and I’m really happy for him,” DeBoer said. “Wish he would remember his first NHL hat trick with a win, too. I’m sure he would enjoy it a little bit more.”