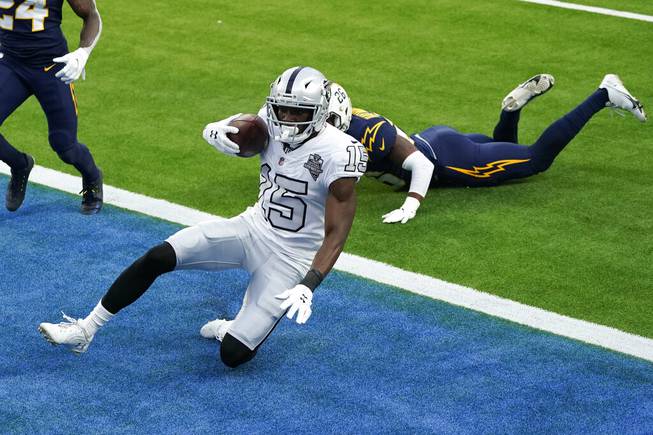 Las Vegas Raiders wide receiver Nelson Agholor scores a touchdown during the second half of an NFL football game against the Los Angeles Chargers, Sunday, Nov. 8, 2020, in Inglewood, Calif.

Like several NFL teams, the Las Vegas Raiders find themselves in a crunch as free agency begins Wednesday, March 17. After the NFL played last season mostly without fans in attendance, its salary cap is declining from $198 million to $182.5 million.

That means the Raiders will have restricted flexibility to overhaul or fine-tune a roster that fell just short of the playoffs last season. Las Vegas has to get creative in dealing with its own free agents, attacking the open market and landing the right players in the NFL Draft, scheduled for April 29-May 1 in Cleveland.

“It’s kind of a big jigsaw puzzle, and there’s no one, finite answer,” Raiders general manager Mike Mayock said. “But congruently, you’ve got to put it all together and make it make sense both economically and [in terms of ]putting the best and most competitive football team on the field.”

The Raiders have obvious personnel needs at seven positions. Here’s a look at each and the primary method the team should use address it—internally, through free agency or in the draft.

The situation: The Raiders have fielded one of the better offensive lines in the league the past few years, but it’s now aging and expensive. Three of five starters from the beginning of last season are now departed. Las Vegas agreed to trade right tackle Trent Brown, who was set to be the team’s second-highest-paid player, to New England and reportedly notified guards Richie Incognito and Gabe Jackson that they will be released.

How to address: Free agency. The Raiders will be tempted to re-sign Incognito to a restructured deal, but he’ll be 38 going into next season—and coming off an Achilles injury. It would be wiser to cut ties and bring in all new faces. The Raiders held up well along the offensive front last year despite a cavalcade of injuries. It’s an area where they can remain strong enough while cutting costs to allocate resources elsewhere.

The situation: Nelson Agholor, last year’s top receiver, is an unrestricted free agent. Henry Ruggs III, Bryan Edwards and Hunter Renfrow will all return on their rookie deals, but none of them are proven, consistent gamebreakers, and the Raiders would like to have someone next to tight end Darren Waller who fits the bill.

How to address: Internally. Re-sign Agholor, who was every bit good enough to be a No. 1 receiver last year, and hope Ruggs and/or Edwards can break out and move past a relatively disappointing rookie season. Renfrow is a valuable short-yardage slot target.

The situation: Rotational player Maurice Hurst is back, but starters Maliek Collins and Johnathan Hankins are both free agents. Clelin Ferrell put on weight and excelled playing inside at times last year, but he remains a more natural defensive end.

How to address: Internally. It wouldn’t be a bad idea to re-up with Collins and/or Hankins. Collins had a disastrous first season with the Raiders but could be available at a discount and might fit better in new defensive coordinator Gus Bradley’s system. Hankins has been one of the Raiders’ most consistent and underrated defensive players in each of the past three years.

The situation: The Raiders desperately need to increase their ability to get pressure on opposing quarterbacks—it has been a major issue for more than a decade. Third-year defensive ends Ferrell and Maxx Crosby are both solid players overall, but Las Vegas needs someone more explosive after ranking 30th in the NFL in sack rate last year.

How to address: NFL Draft. Everything points to the Raiders using their first-round pick (No. 17 overall) on an edge rusher, a wise strategy. If they can hit on the right player, having him on a rookie contract would be a massive advantage for years to come.

Las Vegas Raiders linebacker Nicholas Morrow (50) celebrates an interception in the first half during the Raiders’ first home game against the New Orleans Saints at Allegiant Stadium Monday, Sept. 21, 2020.

The situation: The Raiders are married to Cory Littleton and Nick Kwiatkoski for two more seasons after signing them in free agency last year, but the question is who will play next to them in Bradley’s 4-3 scheme. Last year’s answers, Nicholas Morrow and Raekwon McMillan, are both free agents.

How to address: Internally. The Raiders developed Morrow, an undrafted free agent in 2018, into a useful player and beloved teammate. As long as he doesn’t pull in an inflated offer elsewhere, he should return.

The situation: Las Vegas’ secondary was even worse than its pass rush last year, as Trayvon Mullen, Damon Arnette, Isaiah Johnson and Amik Robertson struggled through growing pains and injuries at cornerback. All four will be back, but unless Mullen plays his best consistently and one or two of the others break out, the Raiders will need more help.

How to address: NFL Draft. For better or worse, the Raiders are all-in with a youth movement at cornerback. They believe in starters Mullen and Arnette, both of whom deserve at least one more year to develop. They should bring in one more high-upside prospect—perhaps a second-round pick—to push Arnette and create competition for playing time.

The situation: Mayock specifically mentioned the importance of finding the right player to pair next to strong safety Jonathan Abram in Bradley’s scheme. It seems pretty clear that player isn’t Erik Harris, the starter the past four years—and the target of much criticism from the Raiders’ fanbase. It could be Jeff Heath, a more natural strong safety who played well when healthy last season.

How to address: Free agency. The pool of available safeties is reasonably deep, with the Rams’ John Johnson the headliner and Las Vegas’ potential target. The Raiders should take their pick to solve their free safety need before the draft.