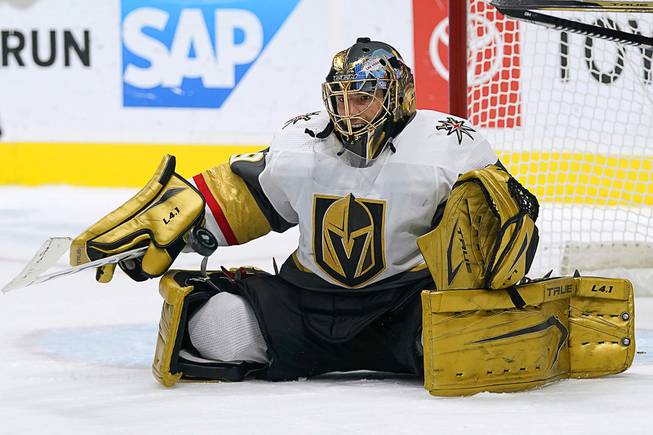 Golden Knights goaltender Marc-Andre Fleury has been placed in the NHL’s protocols for COVID-19 and will likely miss at least this weekend’s games against the St. Louis Blues.

The NHL releases a list of players each day who are in league protocols, and Fleury’s name appeared today. Entering protocol does not necessarily mean a player has tested positive for COVID-19.

There are a number of reasons a player could make the list, including an unconfirmed initial positive result, contact-tracing, symptoms or travel-related quarantine.

In the short term, Fleury’s absence puts the Golden Knights’ goalie position in flux. Fleury has started 13 of the last 14 games since Robin Lehner was injured, and Oscar Dansk is the only other goalie to make a start. Rookie Logan Thompson served as Fleury’s backup Wednesday and played the final parts of the third period.

Lehner is nearing a return and was assigned to AHL Henderson on a conditioning assignment this week. If Lehner is unavailable for Friday’s game in St. Louis, the Golden Knights would be forced to use a tandem of Dansk and Thompson, who have a combined seven games of NHL experience.

Thompson is with the Golden Knights in St. Louis, but Lehner and Dansk are both in Henderson.

The Golden Knights had a scheduled off day today and team officials were not available to comment.

Fleury has enjoyed a renaissance season, going 12-5 with a league-best 1.73 goals-against average, .938 save percentage and four shutouts. He has not missed a game because of injury this season.

Fleury is the third named Golden Knights player to enter protocol this season, after defenseman Alex Pietrangelo and forward Tomas Nosek. While Pietrangelo’s reason was unconfirmed, Nosek was announced to have tested positive. A member of the coaching staff also tested positive for the virus earlier this year.