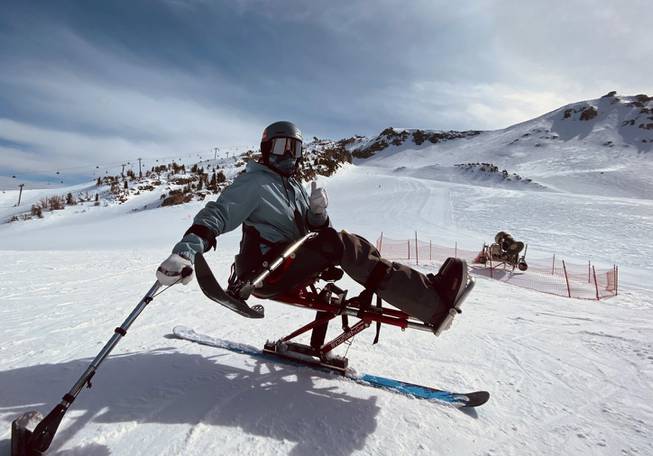 Shelby Estocado, who was left paralyzed after a snowboarding injury last winter in Lee Canyon, now aspires to compete in the Paralympics.

Shelby Estocado slammed into the snow in a scorpion position, then tumbled and landed on her back in intense pain, struggling to breathe and speak.

In a flash, a life-altering spinal cord injury while snowboarding in Lee Canyon last winter put the Las Vegas native in a wheelchair. But she chooses to focus on what she can do today.

That still includes CrossFit, hockey, mountain biking, camping, off-roading, driving a car, and skiing — all with adaptive equipment. Some of these are familiar activities, others new, and with skiing especially, not by half-measure.

The 24-year-old Estocado wants to compete in the Paralympics, which is something her mentors think is a real possibility after a few weeks into training with a specialized monoski. That’s where the athlete is seated facing forward over a single, wide ski and guides themselves with shortened poles.

“Whatever comes my way today, I will fully invest in that. That’s what makes me happy, just living in the moment,” she said. “It’s really humbling when people say I inspire them, but my goal is just for me to be happy, is just to keep grinding and doing what I used to do and still being Shelby.”

Softball and basketball were her main sports as a child, and softball took her to the University of Tulsa after she graduated from Bishop Gorman High School in 2014. In 2016, she also joined the USA Baseball women’s national team.

Every Friday in March, Lee Canyon holds “Feel Good Fridays,” with $5 out of every $25 lift ticket going toward the High Fives Foundation.

In 2018, she graduated from college and came back home to work for a medical technology company. She went with coworkers to Lee Canyon on Feb. 23, 2020, for a day on the slopes.

It was a day that changed her life.

She knew as soon as she hit the jump that she had lost control. The icy impact cracked Estocado’s sternum and left her with a T6 spinal cord injury. A bystander quickly realized the severity of her crash and pushed ski patrol to call in an airlift to University Medical Center.

Estocado spent about a week there before being transferred to Craig Hospital, a premier spinal cord facility in Colorado, where she spent six weeks rehabilitating.

Her injury was “incomplete,” meaning that while she severely bruised her spinal cord and she can’t currently move from the chest down, she has sensation down to her toes. She continues to work on her recovery — her mom is a physical therapist — and she wants to walk again.

She balances it, though, with living in the now.

Estocado relocated to Reno, where she’s closer to more ski resorts and the Truckee headquarters for the High Fives Foundation, which helps people who have sustained life-changing injuries get back to the outdoor sports they love.

This weekend, she will return to ski Lee Canyon for the first time with her new equipment.

Alana Nichols sees a younger version of herself in Estocado. In 2000, Nichols was a 17-year-old snowboarder when she landed on a rock while attempting a backflip and was paralyzed from the waist down. She found adaptive sports in 2003, and competed in six winter and summer Paralympic Games between 2008 and 2016.

Nichols admits her attitude wasn’t immediately as positive as Estocado’s, but she has much in common with the young woman who became a fast friend and soulmate. Nichols had also been a top softball player and was being recruited by universities before she got hurt.

When she sat on a monoski herself, and felt the wind on her face as she ascended the lift, Nichols wanted to know how much she could do. She reached heights few will: five Paralympic medals, including golds in downhill and giant slalom.

She knew what it took, and knows Estocado has that in her, too.

“We both have that elite mentality of, ‘Let’s take it to the top, let’s see how far we can go,’” Nichols said. “It wasn’t even a question for her. She wants to join the Paralympic team and represent the U.S. in some sport.”

Estocado is so physically talented and accustomed to focus and hard work that the choice of sports is hers, Nichols said. She could excel in skiing and wheelchair basketball, another sport where Nichols earned a gold Paralympic medal.

It’s another blessed coincidence for Estocado in the wake of her injury.

Lee Canyon has for years fundraised for the High Fives Foundation, which was founded by Nichols’ husband, Roy Tuscany. Resort management reached out to Tuscany, who helped get Estocado into Craig Hospital and connected her with Nichols and other empowering women who had faced similar injuries.

Tuscany created High Fives in 2009, three years after a ski crash paralyzed him from the belly button down. A lifelong skier who was coaching skiing professionally at the time of his injury, he said he wanted to pay forward the support he gained during his own recovery journey.

Tuscany took a jump at a Mammoth Mountain terrain park too fast, covering 130 feet on what was supposed to be a 100-foot jump. His prognosis was that he would never walk again, but he did. He now walks mostly unaided and skis using adaptive poles and conventional skis, boots and bindings.

He started High Fives with the goal of helping one athlete per year, which he did in his first year. The project picked up quick momentum, and over the last 12 years, it has assisted almost 400 athletes from 42 states and Canada and dispersed almost $5 million in grants.

Anyone the foundation helps is an athlete if they have a goal. Not all come from elite competitive backgrounds like Estocado.

Nichols said Estocado has a solid family that gave her a strong sense of self and support, and it’s only a matter of time before she achieves her goals.

Recently, Nichols took Estocado to Mammoth, where the younger athlete had never skied. She took on steep terrain without hesitation. Nichols said it blows her away and “fills up my cup” to see how quickly she’s picking up her new sport.

“I think she is fully embracing how life is and how she wants life to be. She’s really taking control of it,” Tuscany said.

“So far I’ve just been enjoying what I have every day, being here and investing in my athletic ability,” she said. “I’m not going to quit just because I’m in a wheelchair. I just love it way too much to not even go out and at least try.”

She loves the snow and the ocean.

Surfing could be next.