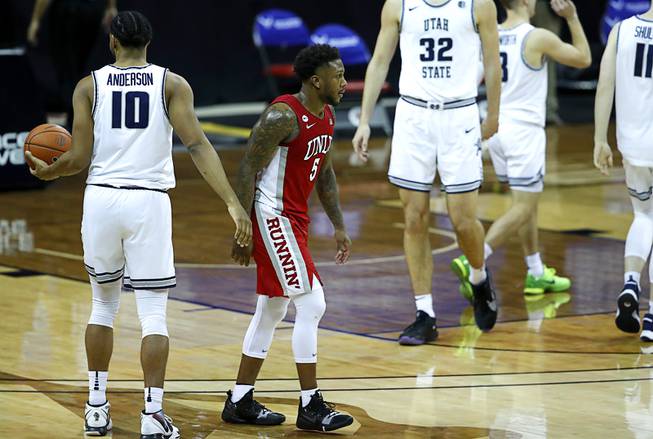 For the eighth consecutive year, UNLV will end its season not with an NCAA Tournament berth, but with a disappointing loss on its home court in the Mountain West tournament.

Utah State ran the scarlet and gray off the floor and out of the Thomas & Mack Center entirely (and may have chased off the coach as well — see below), turning a game that was tied at the half into a 74-53 demolition.

T.J. Otzelberger pointed to the opening minutes of the second half, in which Utah State outscored UNLV 17-9 as the turning point.

“We knew tonight to be successful we were going to have to be the more physical team,” Otzelberger said. “Felt like our guys really answered that call in the first half. Thought we had great ball pressure, hand pressure, did an excellent job defensively. And then we talked about and emphasized those first two minutes after the half, that we needed to get stops. They converted on nine out of 10 out of the locker room and we put ourselves in a deficit and were chasing the whole second half.”

UNLV came in determined not to let Utah State center Neemias Queta beat them. UNLV swarmed Queta whenever the Aggies entered the ball to him in the post, and it worked in the first half, as the 7-footer was limited to one point on 1-of-5 shooting.

With Queta under wraps, Utah State struggled to execute the rest of its precision offense. UNLV held them scoreless for a six-minute stretch, and the scarlet and gray built a 24-18 lead with two minutes left in the half.

They couldn’t close, however, and Utah State went on a 6-0 run before the buzzer to tie the score at halftime.

Utah State spent less time trying to get the ball to Queta to start the second half and the result was smoother execution. The Aggies scored on four of their first five possessions out of the locker room to build a 39-33 lead with 16 minutes remaining.

When Utah State sandwiched a Queta alley-oop dunk and a Queta post bucket around a Brock Miller 3-pointer, the lead was extended to 49-39 with 11:40 to play.

Queta then scored eight straight points to push it to 65-46 with four minutes on the clock, and that was that.

UNLV did itself no favors on offense. After shooting 18-of-23 around the rim and 9-of-17 from 3-point range against Air Force, the scarlet and gray couldn’t buy a bucket against the Utah State defense. Queta blocked or intimidated all forays into the lane, and UNLV finished just 6-of-16 around the basket. On the outside, UNLV shot 6-of-22 on 3-pointers.

Junior guards Bryce Hamilton and David Jenkins, who were supposed to comprise an All-Conference backcourt this season, combined to score 21 points on ice-cold 8-of-32 shooting. Hamilton went for 16 points on 7-of-19 shooting, while Jenkins suffered through a 1-of-13 night and missed all seven of his 3-point attempts while tallying just five points.

Hamilton considered turning pro last offseason, and when asked in the post-game press conference about his future plans, the Pasadena, Calif., native deferred.

“No, I haven’t thought about that at all,” Hamilton said. “I’m just focusing on the season going on right now. Now that the season’s over, that’s something I probably have to think about.”

Now begins an offseason that is sure to take many twists and turns over the next several months. UNLV could see a fair amount of roster turnover, with upperclassmen Hamilton and Jenkins potentially exiting the program and little-used freshmen like Donavan Yap, Jhaylon Martinez and Isaac Lindsey possibly moving on in search of greener pastures.

UNLV currently only has two incoming recruits signed, with 5-star forward Arthur Kaluma and 3-star guard Keshon Gilbert both looking like contributors next year. Beyond that, Otzelberger will be hitting the transfer market in search of instant-impact players at point guard, on the wing and in the frontcourt.

Or, the responsibility of rebuilding the roster could fall to the next coach. Despite UNLV’s disappointing season, Otzelberger’s name has surfaced in connection with the soon-to-be-open Iowa State job. Otzelberger previously served as an assistant at ISU and is still highly thought of in those parts, with some reports going so far as to label him a favorite to land the job.

Between the coaching questions, the outgoing players and the scramble to bring in new talent, the offseason starts now for UNLV and will probably continue long into the summer.