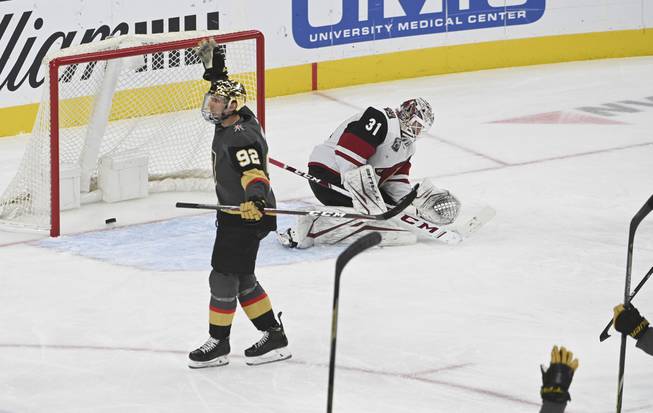 Almost an hour of hockey went by Sunday without a goal. The red light behind the net lit up just once, but that was enough for the Golden Knights.

Tomas Nosek scored with 9:22 remaining in regulation, breaking a scoreless tie and lifting the Golden Knights to a 1-0 victory over the Arizona Coyotes at T-Mobile Arena. The 14 shots Vegas allowed were the fewest in franchise history, and helped Marc-Andre Fleury record his fifth shutout of the season, tying him for the league lead.

The Golden Knights jumped on a turnover from Arizona’s Jakob Chychrun, and Jonathan Marchessault gave a little touch pass to put it on Nosek’s stick. Nosek went low to goalie Adin Hill’s glove side, connecting for the first goal on Vegas’ 27th shot of the game.

If you tuned in beginning in the third period you didn’t miss much in the first two. The Coyotes had a good push to start the game with the first four shots of the afternoon, but that was their best sustained offense of the game. The Golden Knights tilted the ice after that , including 16 shots to Arizona’s four in the second period.

The defense was spectacular for the Golden Knights, allowing a low quantity of Arizona chances but also low quality. They kept the Coyotes out of the center of the ice and and away from scoring opportunities. Fleury’s 14 saves are the fewest he’s ever needed to record a shutout.

The Golden Knights improved to 5-1-0 against the Coyotes this season, including 4-0 at T-Mobile Arena.

Vegas finished with a 28-13 edge in shots on goal.

Through two periods on Sunday, the Golden Knights controlled play for most of the action, but came away with the same amount of goals as the Coyotes, and the second intermission came with 0-0 on the T-Mobile Arena scoreboard.

Vegas had a strong period defensively, holding the Coyotes to four shots in the frame and keeping them away from the scoring areas of the ice. On the other end Vegas’ best push came in the final minute where it had six shot attempts.

The Golden Knights had a couple of good looks earlier in the frame too, including an Alex Pietrangelo redirection that trickled through the crease and a Nicolas Hague wrister from in close. Pietrangelo even hit the crossbar near the midpoint of the period, the fourth time Vegas hit iron in the game.

The Golden Knights had 16 shots on goal in the period, and led 25-10 through two periods.

The Golden Knights didn’t have a poor first period by any measure, but anything feels disappointing when trying to follow up a four-goal first period from last game.

Vegas traded chances with the Arizona Coyotes on Sunday, but neither generated anything too dangerous and no goals followed. The first period ended in a 0-0 tie at T-Mobile Arena.

Arizona came out with a much better effort in the first period than it did on Friday, when the Golden Knights led 4-0 in goals and 17-1 in shots through the first half. The Coyotes, buoyed by a first-minute power play, had the first four shots on goal before Vegas found its legs.

The Golden Knights started to tilt the ice after Arizona’s opening push, but didn’t find the net. They came close a few times though, with Max Pacioretty dinging the post twice and Alex Tuch hitting it once.

With 7:28 remaining in the first period, Ryan Reaves put a monster hit on Arizona’s Jordan Gross, who required help getting off the ice. Officials reviewed the hit for a possible penalty as Reaves appeared to hit Gross in the head, but they decided it was not a penalty and play went on.

Each team went scoreless in their power-play chance in the first period, and the Golden Knights led 9-6 in shots on goal.

In what could be a sign of things to come in what is shaping up to be a physical game, the Coyotes had 16 hits in the first period and Vegas had 13. Those are both on pace for well above their season averages for hits per game.

Lost in the shuffle of the Golden Knights’ seven-goal outburst Friday against the Coyotes was the snapping of a streak Vegas was happy to have in the past.

When Jonathan Marchessault netted a power-play goal to open the scoring in the first period, it snapped a streak of 18 consecutive power plays without a goal. Vegas enters today’s game against Arizona at T-Mobile Arena with a 17.5% success rate with on the man advantage, which is seventh-worst in the league. The puck drops at 1 p.m.

“We need to be a force. There’s no excuse for that group not to have a successful power play,” Marchessault said. “It was a good first goal and we can get a lot of confidence from that.”

Prior to that goal, the Golden Knights had not scored on the power play since March 29, a span of five games where it posted a 1-3-1 record.

They had only one other power play chance Friday and did not score, but they netted six other goals at even strength. Players like to talk about how power-play success can spill over into other facets of the game, and they think that was the case in the last game.

“Power play’s huge, and ours has been struggling for a little bit now so to see them get it going for us is huge,” said forward Keegan Kolesar, who does not play on the power play but scored at 5-on-5. “It is what we needed at the start of the game to get us firing.”

The Golden Knights are nearing a fully healthy roster, and will reach it if Zach Whitecloud returns today. The defenseman has not played since he left the game on March 31 with an undisclosed injury, but skated with the team for the first time on Friday. Coach Pete DeBoer said he could be available as soon as today.

The Golden Knights are 4-1-0 against the Coyotes this season, and after today will play them twice more in Arizona on April 30 and May 1.