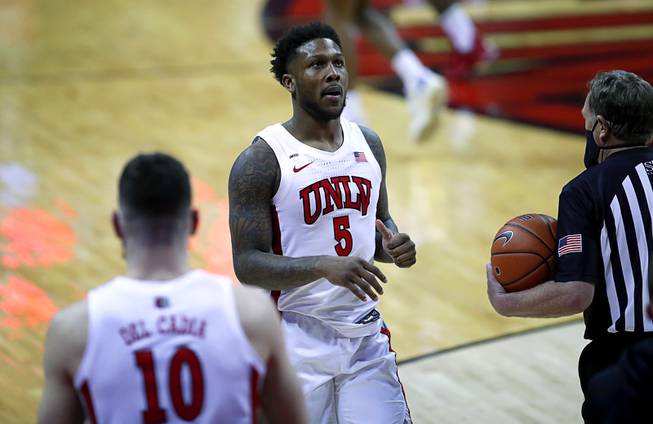 UNLV Rebels guard David Jenkins Jr. (5) reacts as time runs out for the Rebels in a game against the Fresno State Bulldogs at the Thomas & Mack Center Wednesday, Feb. 24, 2021.

The transfer portal goes both ways, and UNLV was reminded of that fact on Sunday as sharpshooting guard David Jenkins committed to Utah.

Jenkins scored 14.8 points per game in 2020-21, his only season in Las Vegas, and he was UNLV’s top 3-point shooter, connecting on 40.1 percent of his long-distance shots.

Jenkins’s time at UNLV did not go quite as expected. He followed former coach T.J. Otzelberger from South Dakota State in 2019, then sat out last season as a redshirt transfer. He became eligible this season and was supposed to be a key contributor as the scarlet and gray made a push for the NCAA Tournament in Otzelberger’s second year, but the team—Jenkins included—started slowly.

Jenkins made just 13-of-45 shots from the field over the first four games as UNLV opened the season 0-4. He picked up the pace and closed the campaign strong, however, knocking down 42.7 percent of his triples the rest of the way.

Despite the gaudy shooting numbers, Jenkins’s relationship with Otzelberger deteriorated throughout the year. According to a source, Otzelberger told Jenkins in January that there would not be a roster spot for him in 2021-22 and that Jenkins should either go pro or transfer at the conclusion of the season.

With Otzelberger gone, the door was left open for Jenkins to return to UNLV next year, but he entered his name in the transfer portal on March 29 and ultimately committed to Utah on Sunday.

Kruger has been active in recruiting via the portal since taking the job, as UNLV has already landed commitments from four transfers: Jordan McCabe (West Virginia), Royce Hamm (Texas), Donovan Williams (Texas) and Victor Iwuakor (Oklahoma).