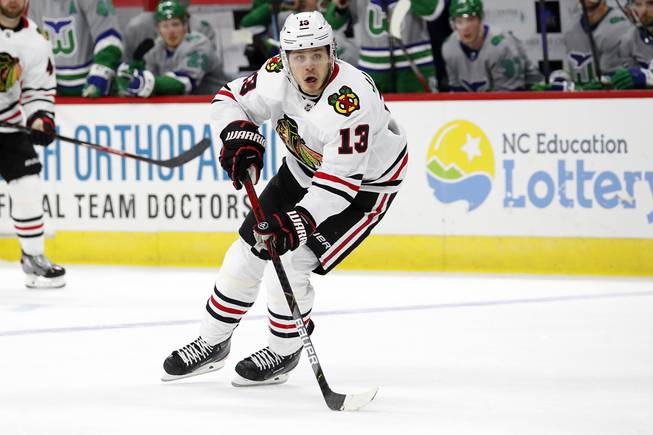 Chicago Blackhawks’ Mattias Janmark (13) skates with the puck against the Carolina Hurricanes during the third period of an NHL hockey game in Raleigh, N.C., Friday, Feb. 19, 2021. (AP Photo/Karl B DeBlaker)

The Golden Knights wanted some help on the third line, and they got it on Monday.

Hours ahead of the NHL trade deadline, the Golden Knights acquired forward Mattias Janmark and a 2022 fifth-round pick from the Chicago Blackhawks in exchange for a 2021 second-round pick and a 2022 third-round pick, the team announced. In order to make the cap situation work, it was a three-team deal with the Sharks where San Jose retained salary.

“We had a chance to make our team better, we felt the cost is one that we could afford, and with that we added the player,” general manager Kelly McCrimmon said. “Janmark was a player that we held in high regard and when we were making our decisions this morning, felt that he was the best fit for our hockey team.”

Janmark was in Columbus with the Blackhawks when he was acquired and will not be available for tonight’s 7 p.m. game against the Kings. He will join the team in Los Angeles tomorrow and is expected to be available on Wednesday.

Janmark, a 28-year-old Swedish native, had 10 goals and 19 points in 41 games with Chicago this season. He played on the Blackhawks’ power play and penalty kill and figures to slot onto Vegas’ third-line left wing. He is an unrestricted free agent at the end of the season.

McCrimmon said Vegas was familiar with Janmark after extensive scouting during the postseason bubble. He was playing for Dallas then, and Vegas ended up playing Janmark and the Stars in the Western Conference Final.

“By the time you spend that much time watching a player, playing against a player like that, you feel like you have a pretty good evaluation of that that guy is and what he can do for you,” McCrimmon said.

Janmark carried a $2.25 million cap hit, which wouldn’t have fit under Vegas’ cap in a normal swap. Instead, the Golden Knights used the Sharks as a broker to help offset his cap hit, sending them a 2022 fifth-round pick in exchange for the cap space. Vegas also acquired minor-league defenseman Nick DeSimone, but he will remain with San Jose’s AHL team, McCrimmon said.

Chicago retained 50% of Janmark’s salary, with San Jose retaining 50% of the remaining total. That leaves Vegas on the hook for a cap number of $562,500, which is below the league minimum.

It’s the second year in a row Vegas swung a deal with Chicago at the trade deadline, after acquiring goalie Robin Lehner last season.

It is also the fourth consecutive trade deadline that the Golden Knights acquired a player for a second-round pick or higher. The last three years, they made deadline deals for Tomas Tatar (2018), Mark Stone (2019) and Lehner (2020).