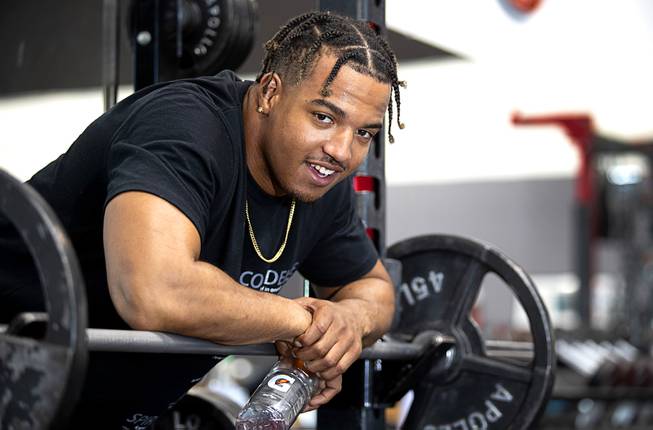 Local Tony Fields Jr. is one of the fastest-rising, best-kept secrets in NFL draft

Tony Fields Jr. has spoken with all 32 teams heading into the NFL draft, and the same question has come up in almost every interview.

All the coaches and general managers want to know what position the four-year collegiate starter at Arizona and West Virginia sees himself playing professionally.

That’s the kind of answer they love to hear. Evaluators are learning to love a lot about the Desert Pines High School graduate as his stock has steadily risen over the last year heading into the draft, which runs from April 29 to May 1.

Fields Jr. became a consensus late-round draft pick last fall with a standout senior season after graduate-transferring to West Virginia where he won the Big 12’s Newcomer of the Year award. He’s since risen to a possible, if not likely, Day 2 selection, a second- or third-round pick, after strong performances at the Senior Bowl and West Virginia’s Pro Day, according to multiple online scouting services.

Fields Jr. is most likely to continue playing weakside linebacker in the NFL, but at 6-foot, 222-pounds, he’s slightly undersized. That’s becoming less of an issue, however, with many NFL defenses moving to a positionless approach and prioritizing versatility.

“The game is changing, the position of linebacker is changing,” Fields Jr. said. “They don’t want guys that are so heavy they can’t run around anymore. That’s why I fit the scheme of football better nowadays. It’s helped me a lot.”

Fields Jr.’s frame is still negatively affecting his outlook to an extent, but it would have been much more prohibitive as recently as a few years ago. He’s also used to his measurables being used against him.

“He would give me a hard time, telling me I was sleeping on him for the first two years, but once he grew into his body, I started to see something special,” Hill said. “Sometimes I feel bad because I didn’t see it early on.”

Fields Jr. always believed he was destined to play football at the highest level. He remembers his NFL dreams starting at 3 years old, when his father threw him into a flag football league with 6- and 7-year-olds, but knows the origins go back even further.

Tony Fields Sr. was something of a local football legend himself, starring at Green Valley High in the late 1990s before going on to play cornerback at BYU. Hill described the speed and intensity father and son played with on the field as identical, even though it was separated by two decades, and that Fields Sr. was talented enough to play in the NFL himself.

Fields Jr. said Fields Sr.’s football career ended when his mother — LeMisha Fields, who’s a famous local in her own right as a member of 1990s R&B group 702 — became pregnant with him. Fields Sr.’s focus turned to his son, whom he instilled with his love of football.

“Even when I’m out there now, he says sometimes it feels like he’s the one out there playing,” Fields Jr. said. “So it’s a blessing to be able to feel like I’m playing not only for myself but for my dad too.”

Hill recalls Fields Sr. being angrier than Fields Jr. when he glossed over his son early in his high school career. Unlike a lot of players driven by slights, Fields Jr. said he had never taken reservations about his size personally. He’s always been self-motivated.

While at Desert Pines, Fields Jr. found ways to fit in extra workouts and schoolwork to allow himself to graduate early and enroll at Arizona a semester early. On his signing day in high school, he mentioned his ultimate goal to “further my career to the pros.”

“Every move I’ve ever made, the NFL was a thought in my mind,” Fields Jr. said. “I’ve always had dreams and aspirations to make it to the top and not to dream minimally.”

Once Hill realized Fields Jr.’s potential, he preached messages of accountability and diligence like he does to all the prep athletes he assists. But it was almost like Fields Jr. didn’t need to hear them.

Fields Jr. seemed to instinctively know the pressure that came with being a well-known football player and the importance of staying out of trouble.

“He doesn’t succumb to anyone,” Hill said. “He doesn’t take a backseat to anyone. He’s one of these people that will make you prove it to him every day. If you get the best of him one day, he’s the type of guy where he’s going to make adjustments to make sure it doesn’t happen two days in a row. That’s what you just love about guys like him.”

The NFL draft interview process is time-consuming, tedious and frustrating to many players as coaches ask tough questions and put them on the defensive. But Fields Jr. has no complaints.

He said the feedback he’s received has been overwhelmingly positive.

“The coaches are all saying that they love my film and love the way I run to the ball,” he said. “That’s always been my No. 1 attribute, running to the ball, and it’s still showing up today. I just go out there and bust my butt. I feel like I’m a first-rounder just like every other guy feels they are, but if I don’t get picked that high, I’ll just show the NFL who I am by going out there and working.”