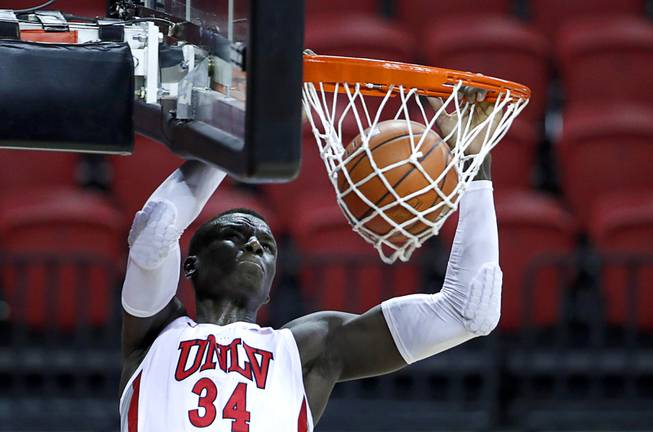 Mbacke Diong entered his name in the transfer portal on Monday, making him the ninth UNLV player to do so since the end of the season.

Diong also intends to declare for the NBA Draft, presumably to gather feedback from professional scouts and executives before returning for a fifth collegiate season.

The loss of Diong is a big one for UNLV. The 6-foot-11 Senegal native came to Las Vegas in 2017 as a Marvin Menzies recruit and immediately flashed good size and athleticism in the middle. He developed over the next four years, increasing his scoring average each season; as a senior in 2020-21 he started 27 of 27 games and averaged 8.9 points, 7.4 rebounds and 1.0 blocks.

UNLV honored Diong with a “Senior Night” ceremony before the final home game of the season. He was the first recruit to play four years at UNLV since Carlos Lopez-Sosa (2010-14), though if he transfers elsewhere for his final campaign it will certainly take some of the shine off that accomplishment.

Diong’s extra year comes via the NCAA, which ruled that the 2020-21 season would not count against any players’ eligibility due to the COVID-19 pandemic.

Like Diong, junior guard Bryce Hamilton also took the double-steps of declaring for the draft while entering the transfer portal. Edoardo Del Cadia, Donavan Yap and Jhaylon Martinez are still in the portal.

Sun podcast: What to make of UNLV’s evolving basketball roster