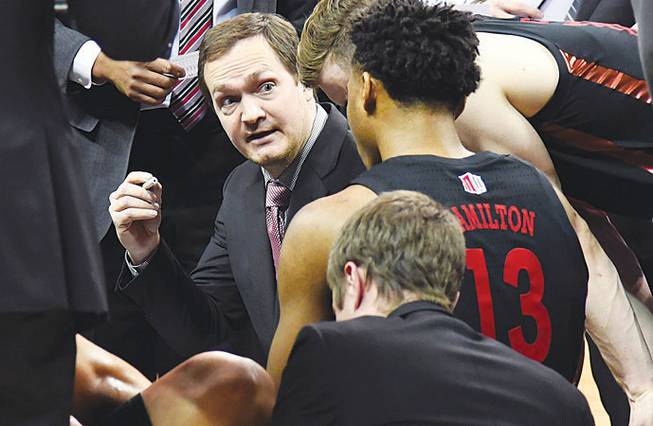 UNLV basketball added a big piece to its rebuilding process on Friday, as former Lamar center David Muoka committed to join the scarlet and gray.

Muoka is the most accomplished of five players UNLV has landed via the transfer portal this offseason, as he was named the Southland Conference Defensive Player of the Year in 2020-21. As a sophomore, Muoka averaged 6.8 rebounds and 2.9 blocks per game; in Southland play he boosted those numbers to 8.7 rebounds and 3.3 blocks.

Beyond the numbers on the stat sheet, UNLV head coach Kevin Kruger should have a good idea of the kind of player he’s getting in Muoka; current UNLV assistant Brandon Chappell was an assistant at Lamar during Muoka’s time there, which probably gave Kruger an inside track in recruiting him once he entered the portal.

Muoka certainly looks to be quick on his feet when he needs to provide help defense around the rim:

Muoka represents a different approach to the transfer portal than we’ve seen from Kruger and his staff. The first four transfers UNLV landed were all players who had underperformed in power conferences; Muoka is someone who overperformed in a low-major conference and will be looking to keep up that level of production as he moves up to the Mountain West level.

Muoka does not appear to be an especially refined offensive player. He averaged just 5.4 points per game last year while shooting 51.3% from the field. He shot a worrying 45.2% from the free-throw line and made only 56.6% of his shots around the rim. For comparison, former UNLV center Mbacke Diong converted 68.5% of his close-range attempts last year.

Despite the low shooting percentages, Muoka certainly has the ability to run the floor and finish above the rim:

Of the program’s two incoming high-school recruits, only Keshon Gilbert has expressed his intention to still come to UNLV in the wake of T.J. Otzelberger’s departure. Touted prep star Arthur Kaluma has not made his plans known, either to the media or to UNLV coaches.

Local Tony Fields Jr. is one of the fastest-rising, best-kept secrets in NFL draft