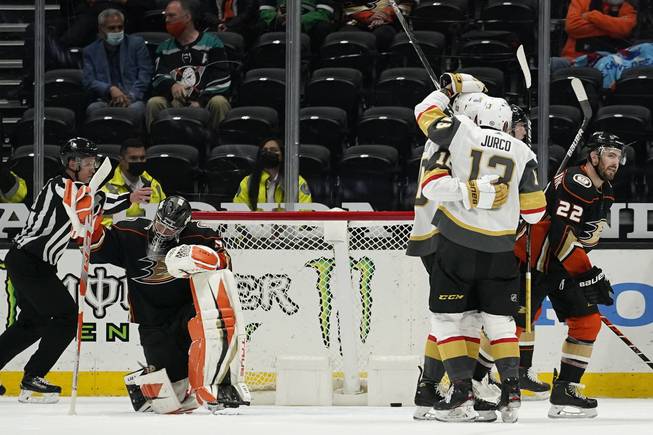 The Golden Knights’ first period Friday was precisely how they wanted to set the tone. They controlled the zone when they had the puck, forechecked well when they didn’t, and did everything to set up a successful night.

The second period is where they made sure it counted.

The Golden Knights book-ended the second period with goals, scoring nine seconds in and with 22 seconds remaining as part of a three-goal frame to run away from the Ducks with a 4-0 victory at Honda Center.

The Golden Knights finished with a 51-16 edge in shots on goal, including 23-3 in the second period. After ending March and beginning April with four losses in five games, the victory was the Golden Knights’ fifth in a row, their third winning streak of at least that length this season.

“I thought we had a good first period. We knew it was coming, we just had to get more pucks to the net and more traffic,” forward Nicolas Roy said. “We managed the puck pretty well and some good offensive thunder, so it was a really good game overall.”

Vegas led 15-6 in shots on goal for the first, and it turns out that was just the opening salvo. The second period was perhaps the Golden Knights’ most dominant of the season, matching their season-best in shots allowed and falling one short of their season high in shots-for.

William Karlsson got it going early, winning the draw and charging the zone alongside his winger. Reilly Smith crashed the net and though it didn’t register as a shot, the puck kicked off goalie John Gibson’s pads and to Karlsson, who put it home nine seconds after the puck first hit the ice.

Nine seconds marked the third-fastest goal to start a period in Vegas history. The fastest was also against the Ducks, when Max Pacioretty scored seven seconds into overtime on Jan. 16.

“It’s a great to start to a period and it’s a bit of a boost,” Karlsson said. “Everyone wants to get going out there and score, and I think that second period we played really well.”

That was just the start of the scoring. Chandler Stephenson got loose on a partial breakaway and roofed his second goal in as many games. It gave him 10 goals and 25 points in 38 games this season, one goal and one point off his career-best marks set in 65 games last year.

As the period was winding down, Roy potted Vegas’ third of the period. After some strong work on the boards by his teammates, Roy snatched the puck before Max Comtois could settle it and fired it by Gibson with 22 seconds remaining in the second.

The Golden Knights’ ownership of the second period helped boost their numbers in what had been their worst frame this season. Their 37 goals were their fewest scored and the 36 allowed were the most in any period this year, while they had a plus-15 goal differential in the first and a plus-22 differential in the third. They were even plus-6 in overtime.

Brayden McNabb added one more in the third period, his second of the season on his season-high fifth shot on goal, to make it 4-0.

It was the second shutout this week and second time this month Vegas reached 51 shots.

“I think we’re starting to feel like our game is going for longer periods in the right direction,” coach Pete DeBoer said. “We’re starting to dictate games pretty consistently here, which is what you want to do down the stretch.”

Like Marc-Andre Fleury was on Sunday, Robin Lehner on Wednesday was the beneficiary of a strong outing from his skaters to make his night look easy. He made 16 saves to record his first shutout of the season.

Some nights the Golden Knights need their goalies to steal a game for them, but not tonight. The Ducks mustered just two high-danger chances (according to Natural Stat Trick) through the first two periods while the outcome of the game was still in question, as the Golden Knights looked as good as they have all season.

“I think the best defense is the offense,” Roy said. “We were in their face the whole night, we kept the puck 200 feet from our zone and we had a lot of shots. I think that was the key tonight.”