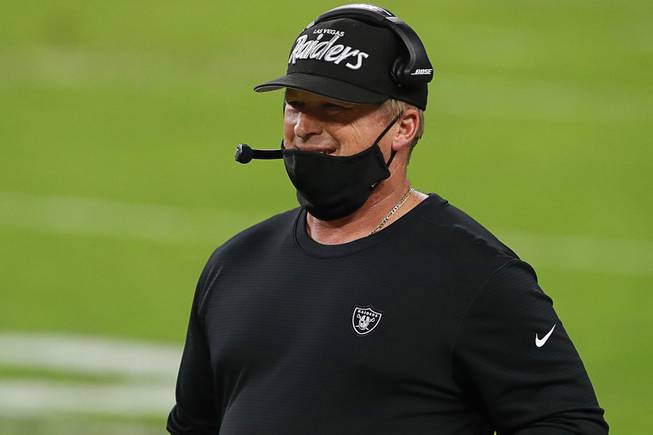 Las Vegas Raiders head coach Jon Gruden stands on the sidelines against the Miami Dolphins during the second half of an NFL football game, Saturday, Dec. 26, 2020, in Las Vegas.

The NFL draft is less than two weeks away, and if you’re the type who follows mock drafts religiously, you may be able to feel a consensus forming around the Raiders’ first-round pick.

Throughout the 2020 season, the poor performance of the Las Vegas defense led most to assume that the team’s biggest need in the 2021 draft would be on that side of the ball. But after the way head coach Jon Gruden and general manager Mike Mayock reshaped the roster in free agency, offensive line has emerged as an area in that could use some major reinforcement.

The release of Rodney Hudson was a particular surprise, and there are questions at the right guard position in the wake of a trade that sent Gabe Jackson to Seattle. But it was the trade of Trent Brown that has left the biggest hole, leaving the Raiders in serious need of a full-time right tackle.

The mock draft community is reflecting that new reality, with several of the most prominent now projecting Las Vegas to select a blocker in the first round.

In The Athletic’s most recent seven-round mock, draftnik Dane Brugler has the Raiders opting for Virginia Tech offensive tackle Christian Darrisaw at No. 17. Darrisaw was the fourth offensive lineman off the board in that mock, but he nonetheless appears to be good value at that spot based on how other mocks are shaking out.

Over at Sports Illustrated, Albert Breer also has Vegas going for Darrisaw in Round 1. Darrisaw was a three-year starter at left tackle for the Hokies and earned a spot on the All-ACC First Team in 2020, when he allowed just one sack all season. His size (6-foot-4, 320 pounds) and power at the point of attack should allow him to excel at either tackle position.

While Darrisaw is becoming a popular mock-pick for Las Vegas, he’s not the only offensive lineman on the radar at No. 17.

Longtime ESPN draft guru Mel Kiper believes the Raiders will add a lineman, but he’s got them opting for USC’s Alijah Vera-Tucker at No. 17. The wrinkle is that in Kiper’s scenario, Darrisaw goes off the board to the Minnesota Vikings at No. 14, leaving Vera-Tucker as the next-best option. Tucker played guard in 2019 and was the Trojans’ left tackle in 2020, and Kiper posits that he could play either position for the Raiders.

The mock draft at Walter Football has Las Vegas going O-line with the pick, but the choice veers in an unusual direction: Clemson guard/tackle Jackson Carman. A gigantic, 340-pounder, Carman is an athlete who can man either position, but he’s not projected as a first-rounder in most mocks. Then again, the Raiders are obsessed with Clemson players, as they’ve drafted four former Tigers in the last two years—including guard John Simpson, who they selected in the fourth round last year—so maybe this wouldn’t be such a reach for them, after all.

Not everyone believes Las Vegas will go with a blocker in Round 1.

Daniel Jeremiah of NFL.com is one draftnik who has the Raiders sticking with defense at No. 17 overall. In his latest mock, Las Vegas goes for Notre Dame linebacker Jeremiah Owusu-Koramoah, one of the most versatile defenders available this year. It’s not an unpopular projection; over at the Sporting News, mock artist Vinnie Iyer also has the Raiders nabbing Owusu-Koramoah in Round 1, as does NFL.com analyst Charles Davis.

Over the last two years, Owusu-Koramoah logged 142 tackles and 24.5 tackles for loss in 25 games. And he wasn’t just jumping onto piles—he made plays. Owusu-Koramoah posted 7.0 sacks, eight passes defensed and five forced fumbles during that time. As a redshirt junior in 2020 he was named ACC Defensive Player of the Year and First Team All-America. That sounds like the kind of player the Raiders could definitely use.

All of this could change dramatically between now and draft night. No one really knows for sure what Gruden and Mayock’s board looks like, and even if they did, all it takes is one team ahead of them to do something unexpected and the entire chain is thrown out of whack.