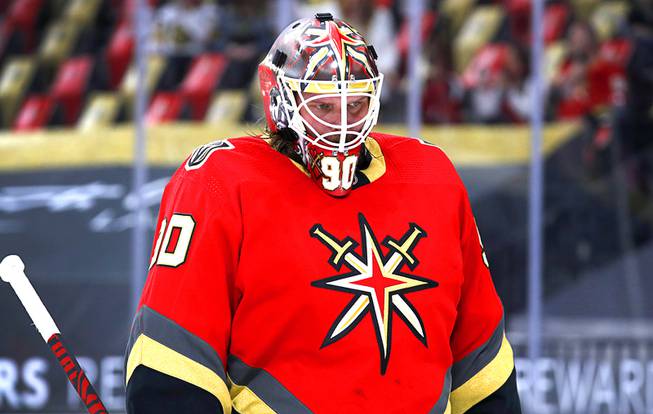 Vegas Golden Knights goaltender Robin Lehner (90) is shown in the third period of a game against the the Arizona Coyotes at T-Mobile Arena Friday, April 9, 2021.

Golden Knights goalie Robin Lehner said today the NHL lied to its players in regard to its policies surrounding COVID-19 restrictions and vaccination.

Lehner, speaking unprompted after his normal pregame media availability, said the NHL told players that if the league hit a certain threshold of vaccinations, restrictions would ease.

Now that many teams throughout the league, including the Golden Knights, have been vaccinated, the league and NHL Players’ Association have told Lehner that will not be the case.

“We were approached and promised things for our league if we got vaccinated,” Lehner said. “When we did it, now they changed. They said it’s not happening. I think that’s wrong.”

Lehner said he was unsure about getting the vaccine but thought the easing of restrictions was enough of an incentive to get it.

Lehner said he had a call with the NHL and the NHL Players’ Association on Tuesday and was told they were surveying teams to see how many players and staff had taken the vaccine.

He was told that until all teams have had the chance to get fully vaccinated, there was a worry about “competitive edge” if restrictions on vaccinated teams were eased.

“It made me really disappointed and emotional last night and it was a lie to our face — to do this and you’ll get this. And now that’s not happening because of competitive edge,” Lehner said. “Don’t talk to me about competitive edge. This is human lives and people are struggling with this stuff a lot in society, and we are humans just like everyone else.”

Lehner said the mental aspect of the COVID-19 pandemic is not getting enough attention.

“People develop things during isolations like this, like drug abuse, domestic violence, financial issues that cause bad anxieties that lead to depression,” he said.

The NHL has instituted strict restrictions on players that require them to remain largely sequestered in their hotel rooms while on the road. While at home, they are advised not to go out unless necessary.

Lehner said he took the shot with the understanding that league restrictions would abate once enough players on the team were vaccinated. The NBA, MLB and other leagues have a policy that once 85% of the team and staff is vaccinated, they can start to return to normal life away the arena or stadium.

As of now, the NHL has no such policy.

“Being lied to about things changing, to kind of force us to take the vaccine, unacceptable,” Lehner said.  “Now that we’ve taken the vaccine, to have the excuse to say, ‘Nah, we’re not changing because of competitive advantage,’ it’s outrageous.”