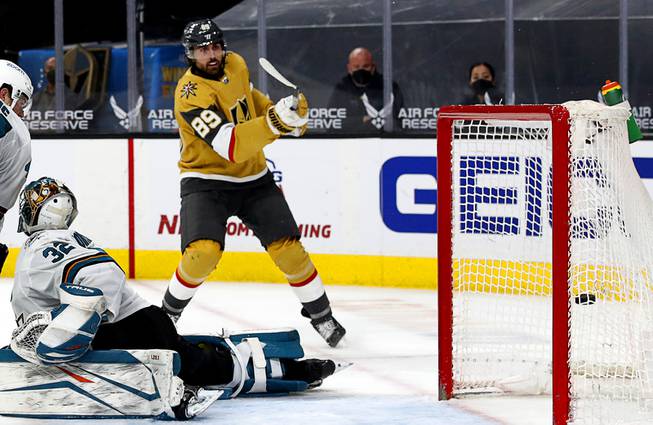 The Golden Knights briefly fell behind the Sharks in the second period, then turned around to tie it take their first lead of the game.

After falling behind by a goal, Mark Stone and Alex Tuch connected with goals of their own and the Golden Knights grabbed a 3-2 lead after two periods at T-Mobile Arena on Wednesday.

The period was cruising right along without a goal until Tomas Hertl untied the game 11:07 in the frame. He won a battle to the puck and unleashed an angry slapper at Marc-Andre Fleury from a sharp angle. It wasn’t a typical scoring area of the ice, but it beat Fleury up top and put the Sharks back in the lead.

After the Golden Knights failed to score on the first two power plays of the period, they made sure to connect on their third. It was a carbon copy of their second goal from Monday night, with Stone setting up on the right side of the net and wrapping it around the goalie inside the far post. Just like Monday, Stone’s power-play tally tied the game 2-2.

The fireworks continued after play stopped as well. This time it was an Evander Kane hit on Alec Martinez that sparked a fracas, and Tuch went to the box for roughing. It was the second time in two periods the teams came together to exchange words.

And once Tuch came out of the box, he potted a goal that had a little bit more emotion behind it than others. Shea Theodore hit him with a perfect pass across the ice, and Tuch whipped it into an open net to put Vegas up 3-2 with 50 seconds remaining in the period.

One of hockey’s best rivalries is alive and well.

The Golden Knights and Sharks never fail to get under each others’ skins they meet, and did so again in an explosive first period Wednesday. Each side scored a goal, and the period ended in a 1-1 tie at T-Mobile Arena.

The Sharks jumped on the board 2:38 into the game in a textbook example of why you should crash the net. Joel Kellman pulled the puck around behind the Vegas net and through it at the crease, where Timo Meier was waiting for the redirect. It snuck by Marc-Andre Fleury and gave San Jose an early lead.

Jonathan Marchessault also scored from the blue paint, albeit in a different way. William Karlsson caught the Sharks puck-watching and nobody picked up Marchessault, who collected Karlsson’s pass and drove to the net. He deked once on rookie goalie Josef Korenar, then beat him on the shot to even the game at 6:51.

These teams also reminded everyone why this rivalry is so heated. It started on a Brent Burns hit from behind on Max Pacioretty that led to a scrap between the two, but nearly devolved into a full-on line brawl. Alex Tuch and Evander Kane were scrapping, as were Nicolas Hague and Meier.

Only Pacioretty and Burns were assessed penalties, and they continued to jaw at each other when they came out of the box.

It’s been anticipated, but the Golden Knights can make it official: With a win or an overtime loss to the San Jose Sharks tonight, Vegas will clinch a postseason berth for the fourth year in a row.

The Golden Knights have been at or near the top of the West Division standings all season, so Vegas reaching the postseason is hardly a surprise. But a team with Stanley Cup dreams needs to reach the playoffs before it can win it, and clinching a spot is an important first step. Puck drop is scheduled for 6:30 p.m. at T-Mobile Arena.

“It’s obviously every team’s goal to make the playoffs, so I think it doesn’t matter if we get there tonight or any other night,” forward Tomas Nosek said. “The most important thing is to get there and have a run.”

The Golden Knights won their division in two of their first three years and finished as a three-seed in 2018, having never missed the postseason. They have played in eight playoff rounds and have won five of them.

Vegas has the most wins in the NHL, with a 32-11-2 record, putting them two points above Colorado for first in the West (Colorado has played two fewer games). The top four teams in each division make the playoffs, and the Golden Knights are an eye-popping 22 points clear of fifth-place St. Louis. Missing the postseason has not been a concern for quite some time.

What is still of concern is seeding. Whichever team wins the West is guaranteed to have home-ice advantage for the first two rounds if it makes it that far, and with how close the Golden Knights and Avalanche are in the standings, every point could matter in the race for the top.

“We’re not going to pat ourselves on the back for making the playoffs. That’s not the end goal here,” coach Pete DeBoer said. “But it is an accomplishment, and it takes a good amount of work and dedication and perseverance to secure a spot.”

The Golden Knights are still without injured forwards Reilly Smith, who was removed from Sunday’s game and missed Monday’s game, Keegan Kolesar, who has missed the last five games, and Ryan Reaves, who has also missed the last five. Reaves is on long-term injured reserve and is not eligible to return for a few weeks, but no update has been given for Smith or Kolesar, except to say they are unavailable for tonight.

With them out, Dylan Sikura is expected to make his Golden Knights debut. Acquired in offseason trade with Chicago, the 25-year-old forward has appeared in 47 career NHL games and had 19 points in 27 games with AHL Henderson.

“I remember he had a good camp; he’s a skilled guy. The reports out of Henderson are excellent,” DeBoer said. “He played for Chicago against us in the (postseason) bubble, and I thought he was pretty effective. He’s got a handful of games under his belt at the NHL level, and it should be a pretty seamless transition.”

First-round forecast: Who might the Raiders snag in the NFL Draft?