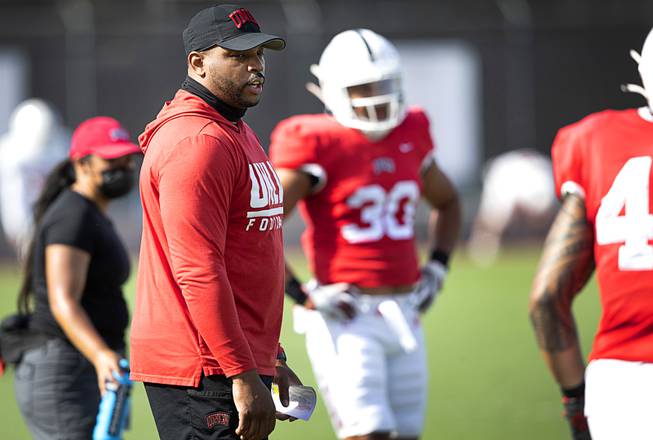 Defensive players on the UNLV football team are in a film session when the video suddenly changes to old San Francisco 49ers practice film.

They are talking about technique, using an example from a former NFL linebacker whose ideas they are quickly embracing. Former 49ers linebacker Larry Grant is in his initial months as UNLV’s defensive analyst.

In his role, Grant isn’t allowed to coach on the field or recruit. Rather, he toils behind the scenes in preparation, and details are his forte. During a recent scrimmage, for instance, he was able to communicate observations with coaches for in-game adjustments.

“He will tap me on the he arm, ‘Did you see that footwork or that pad level.’ That’s huge for me,” said Peter Hansen, the UNLV defensive coordinator.

Grant came to UNLV this spring after two seasons at City College of San Francisco, a powerhouse junior college program and his alma mater. He also played two years at Ohio State, and proudly says he played four times in the national championship game — twice with Ohio State and twice in junior college. He also played in the Super Bowl with the 49ers.

“Sitting back and watching how hard these guys work, I understand what they are going through,” Grant said. “It’s exciting to being able to give them a little of the knowledge I have accumulated over the years.”

Hansen will tell you Grant brings superior intellect and experience to the program. After all, you don’t stick in the NFL as mostly a reserve for six seasons without providing something to an organization.

“His intelligence is why he was in that league,” Hansen said. “It wasn’t his strength, because his strength numbers weren’t huge. He wasn’t super fast. It was all his intelligence. More than once, he would bring it up to me, ‘When you need a linebackers coach in your career, don’t forget about me.’ So here we are.”

Grant knew during college that he wanted to get into coaching. He was working toward that goal throughout his career, whether that was asking extra questions of coaches or staying late in the film room to gain knowledge of how the sport works.

Ultimately, the 36-year-old Grant intends to be a head coach.

He was the JC Athletic Bureau’s defensive player of the year in 2005, finishing his two-year career with 175 tackles, 10 sacks, 20.5 tackles for a loss and seven caused fumbles. He started all 13 games as a senior in 2007 with Ohio State, which lost in the national championship game to LSU.

A few months later, Grant was drafted in the seventh round by his hometown 49ers — the team he cheered for as a child. He had two stints with the 49ers, including being a reserve on the squad that lost in the 2013 Super Bowl to the Baltimore Ravens.

That’s where his journey to Las Vegas indirectly started in meeting Hansen, who was a defensive assistant with the Niners. When Hansen reached out to Grant about coming to UNLV, the answer was almost instant.

Grant is also a tremendous resource for players for professional aspirations.

“He is ready with an answer at any point,” Hansen said. “He made it known early, ‘Anytime you have a question, I am available if you want to bounce something off me.’”

And UNLV isn’t only getting one Grant. His wife, Kristen, was recently accepted at the university to begin her undergraduate studies. They love Las Vegas, having frequently visited from the Bay Area when their sons played in travel basketball tournaments.

“My first impression getting here was, ‘Wow,’ ” Grant said. “There’s a bunch of young men in this program that are excited about getting better.”