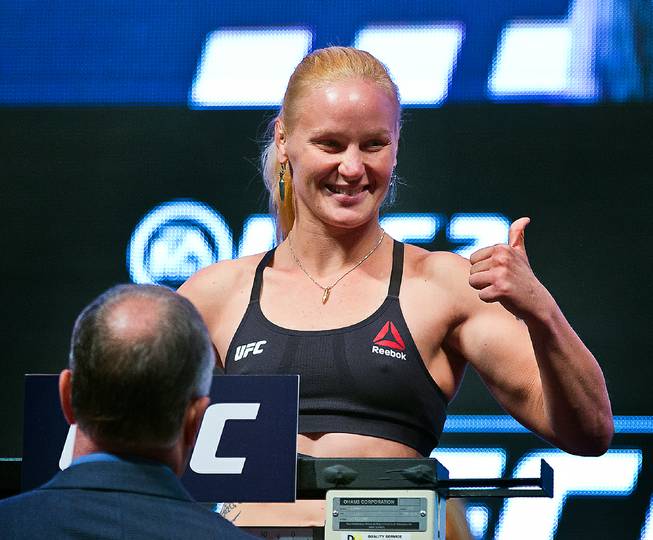 Women’s Bantamweight Valentina Shevchenko gives a thumbs up on the scale during the UFC 196 weigh ins at the MGM Grand Garden Arena on Friday, March 4, 2016.

The NFL Draft is all the rage among the sports betting crowd lately.

Now with practically every sports book in town offering full betting menus on next week’s extravaganza, the most common subject among gamblers is where to find the draft edges. One (personal) problem — I don’t handicap the draft.

There are a lot of opportunities for profit, sure, but it requires a much different skillset and approach than betting on games. And there are still plenty of games to bet on right now.

So I’ll stick to what’s been working all year for the weekend wagers column all year and attack five different sports with a bet in each.

Pieters and Lewis are two highly underrated golfers on strong form. I can’t believe they’re underdogs, albeit slightly, to the Swedish pair of Noren and Norlander in the PGA Tour’s annual team event. The Zurich reverts to best-ball scoring on Saturday after a round of alternate-shot play on Friday, and that should benefit Pieters and Lewis. With as soft as TPC Louisiana is playing, one of them should have a birdie-or-better chance on almost every hole. That might not be the case with Noren and Norlander. They’ve played evenly so far with both teams at 7-under par but Norlander is the least trustworthy of the four players and prone to blowing up and putting up higher scores. I’d make Pieters and Lewis around a -125 favorite in this matchup, meaning there’s some real value in backing them at this price.

Get these types of prices on the Yankees while you still can. They won’t be around long. New York struggled to start the year and caused a panicked reaction that was mostly unjustified. The Yankees remain the prohibitive favorite in the American League East, if not the whole American League. Coming into the season, it might have been a stretch to suggest that their ace Gerrit Cole would ever be available at this low of a price going into one of his starts — let alone against light-hitting Cleveland. Yes, Cleveland is countering with reigning Cy Young Award winner Shane Bieber but Cole’s numbers have been even better than Bieber’s to start the year. The Yankees should find a way to win a low-scoring game.

Toronto defeated Winnipeg 5-3 Thursday to start this two-game set and snap a five-game losing streak. The Leafs have been a streaky team all season, and that game might have been the start of another positive streak — one they need to put the finishing touches on a North division title. From an analytic perspective, the Jets aren’t in the same class with the Maple Leafs. Winnipeg has proven the numbers wrong all year, riding Vezina Trophy candidate Connor Hellebuyck in net, but I remain skeptical. At some point, they’re going to regress. I’m much more bullish on Toronto, which makes it an easy take at a relatively short price.

This is admittedly a gamble, but there’s nothing that leaps off the page in the UFC’s three title fights so let’s take a shot at a high potential payout. The women’s flyweight champion should have no problem defending her title against the former strawweight champion but -500 is a price too prohibitive to play here. Taking Shevchenko by stoppage at +125 at Circa Sports might be the safer option, as a submission also seems possible, but a knockout is far more likely. Shevchenko is one of the most seasoned strikers in the UFC, regardless of gender, and Andrade lacks in the defensive department. Twenty-five minutes is a long time. Shevchenko should catch Andrade at least one, and that may alone be enough to cash this bet.

Las Vegas’ most famous auto-racin’ export is set up to deliver in a big way for bettors this weekend at Talladega. Busch has always been one of the better drivers at drafting tracks but the odds no longer reflect it given his recent struggles. He’s available at as high as 21-to-1 to win Sunday’s Cup race at Boyd Gaming (also worth a bet) when he’s usually more in the 12-to-1 range going into Talladega races. Bowman won last week in Richmond and now has one more victory than Busch dating back to last season — it’s 2 to 1 — but the latter is still the better driver, and in this case, likely with the better equipment. Busch holds value in most matchups this week, but especially this one.