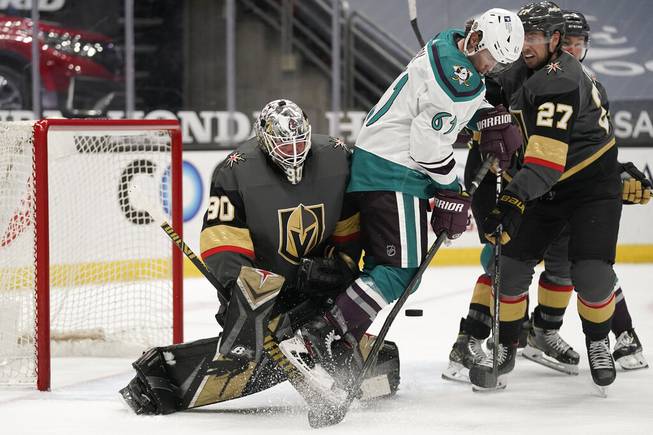 Anaheim Ducks’ Troy Terry, center right, jumps out of the way of the puck as Vegas Golden Knights goaltender Robin Lehner, of Sweden, guards the net during the second period of an NHL hockey game Saturday, April 24, 2021, in Anaheim, Calif.

Chandler Stephenson scored two goals in the first period and the Vegas Golden Knights cruised to their franchise-record ninth consecutive victory, 5-1 over the last-place Anaheim Ducks on Saturday night.

Stephenson had the first three-point night of his career, while Shea Theodore and William Karlsson got goals against their former team as the Knights rolled toward their fourth straight playoff appearance. William Carrier also scored for Vegas, which completed the season series with seven wins over Anaheim in eight meetings.

Robin Lehner made 23 saves in his second win at Honda Center in nine days. The veteran goalie blanked the the NHL’s worst offensive team 4-0 in Anaheim on April 16.

Sam Steel scored for the Ducks, who have lost four straight and nine of 12. Anaheim is playing out the string on its first stretch of three consecutive non-playoff seasons since 2002.

John Gibson stopped 26 shots for Anaheim, but the goalie is winless in eight consecutive home starts since March 8.

Ducks captain Ryan Getzlaf didn’t play in the final two periods due to an upper-body injury.

Stephenson opened the scoring just 28 seconds in after a turnover by Anaheim’s David Backes. Max Pacioretty threw a backhand pass from the goal line into the slot, extending his points streak to a career high-tying seven games with the assist.

Later in the first period, Theodore threaded a beautiful outlet pass past two napping Ducks to set up a breakaway for Stephenson, whose quick release beat Gibson’s blocker for his 12th goal.

Alex Pietrangelo then made a sharp pass through two Ducks defensemen to Carrier, who buried it for his fifth goal.

Steel broke up Lehner’s shutout bid with a rebound goal while on one knee in the Knights’ crease early in the third period. Steel’s goal was his first since March 28.

Karlsson added his 10th goal in his last 13 games against the Ducks on a rebound moments later.

Vegas extended its lead atop the West Division to four points on Colorado, but the Avalanche have two games in hand. The rivals meet two more times this season, including Wednesday at T-Mobile Arena.