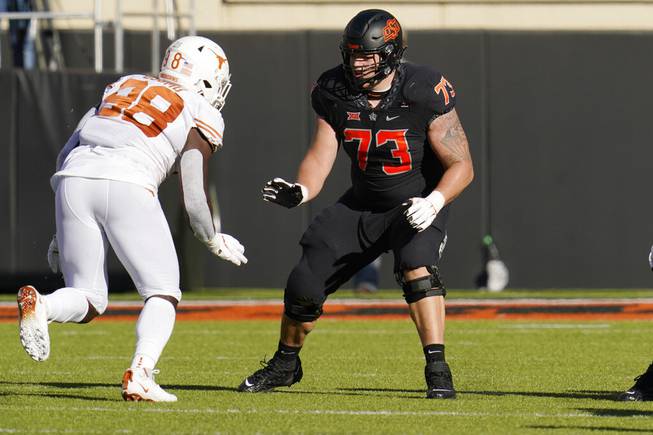 Offense is not the Raiders’ biggest problem. Las Vegas finished 10th in scoring in 2020, and there aren’t a lot of holes at the skill positions. Derek Carr is entrenched at quarterback, Darren Waller is a Pro Bowl tight end and Josh Jacobs is a star running back. Things are good.

The receiving corps is a little iffy, but with the team using first- and third-round picks last year on Henry Ruggs and Bryan Edwards, respectively, it’s unlikely the Raiders will target a pass-catcher in the first round this year.

The offensive line is a different story. The unit is undergoing big changes this offseason and Las Vegas could head into Thursday’s draft looking for long-term solutions at right tackle, center and guard.

The 2021 draft is considered to be deep at offensive line, so it’s something Las Vegas could shore up on Friday or Saturday as well. But if head coach Jon Gruden and general manager Mike Mayock are set on adding a top-end talent, there should be plenty to choose from when the Raiders pick at No. 17 overall.

At 6-foot-6, 320 pounds, Jenkins is recognized as the nastiest run blocker in the 2021 draft, and it’s going to be hard for Gruden not to take him considering how much the coach appears to want a massive road-grader anchoring the right side of his offensive line.

That pursuit led Gruden to give Trent Brown a massive free-agent contract before the 2019 season, but it didn’t work out as Brown was oft-injured and the running game sputtered to 4.2 yards per carry this season (20th in the league). Jenkins, with his ability to manhandle defensive linemen, could go a long way toward restoring a dominant ground game in Las Vegas.

Jenkins isn’t one of these left tackles masquerading on the right side — he is a right tackle through and through, holding down that position for the last three years at Oklahoma State. He can overpower opponents at the point of attack, and he’s nimble enough to get out to the second level and seal off linebackers and defensive backs.

On this play, Jenkins is lined up at right tackle and blocks down on the defensive lineman. He then kicks out and pancakes the outside linebacker, single-handedly creating a huge running lane:

After investing so much in a running back tandem of Josh Jacons and Kenyan Drake, the best thing Las Vegas could do to maximize that duo would be drafting Jenkins.

Another option up front could be Darrisaw, though he’s more of a pass-blocking left tackle than a bulldozing right tackle. A former top recruit who earned All-ACC honors in 2020, Darrisaw has the pedigree and the talent to be a franchise building block.

Though he can be a bit lumbering when asked to get out in space, Darrisaw is a virtual wall when it comes to protecting the quarterback. Check out No. 77 in this clip:

Edge rushers who try to get around him with speed are simply ridden past the pocket. Inside moves are cut off with ease. And power rushers are simply stopped in their tracks. Derek Carr would love Darrisaw.

Does that make Darrisaw a fit for the Raiders? Maybe not. After Kolton Miller got a big-money extension at left tackle, either he or Darrisaw would have to move to the right side, and while Miller played his rookie year there, it would be a misuse of assets. And while Jenkins is likely to be available at No. 17, there’s a good chance Darrisaw is already off the board when Las Vegas picks.

If Darrisaw is there, however, the sheer talent level could make him the pick.

Vera-Tucker has been a riser during the draft process, and the one thing holding him back — questions about his true position — wouldn’t necessarily matter as much to the Raiders, which puts him squarely in play for No. 17.

Vera-Tucker played left tackle in 2020, but at 6-foot-3, 315 pounds, Vera-Tucker isn’t built like a traditional NFL tackle. The Raiders certainly prefer their bookends to be on the longer side, as Miller and Brown both check in at 6-foot-8. But Vera-Tucker also has experience at guard, and he could easily slide inside to man that position in Las Vegas, especially with the team losing right guard Gabe Jackson this offseason.

His athleticism is impressive. In this clip, Vera-Tucker (No. 75) quickly gets out of his stance at left tackle and seals off the defensive lineman, then moves out to the second level and pushes a linebacker five yards downfield, clearing the way for a nice ground gain:

Vera-Tucker can play, and the positional versatility could actually be intriguing to the Raiders.

In terms of upside, there might not be a more exciting blocker in this draft than Carman. He’s a giant at 6-foot-5, 335 pounds, and he is perhaps the most graceful mover in the class, able to get out in space and nail pinpoint blocks.

Watch him (No. 79) on this screen pass, as he lets the initial rusher past him and then explodes into the open field to pave the way for the receiver. Carman is tasked with making a one-on-one block against a cornerback in space, which is not an easy thing to do. Carman executes it perfectly though and the play goes for an easy eight yards:

Carman is huge, athletic, and has a ton of experience going against top-flight pass rushers while protecting Trevor Lawrence’s blind side. He’s been projected as a Day 2 or Day 3 pick during the run-up to the draft, but it wouldn’t be an absolute shock to see a team fall in love with him in the first round — and when you consider the Clemson connection, it could very well be the Raiders.

If the Raiders want to simply pluck a guard from the college ranks and run power behind him, Banks could be the guy. A three-year starter at Notre Dame, Banks checks in at 6-foot-5, 330 pounds, and he knows how to use that frame to move defenders out of the way in the running game.

Watch him (No. 69) simply destroy a Clemson defensive tackle on this play, uprooting him and driving him into the ground for a pancake at the point of attack:

That’s dominant stuff. If the Raiders are determined to inject some nasty into their O-line, Banks is an option. He’s not projected as a first-rounder, however, and guards generally don’t have the same draft value as tackles. So if Banks is on the radar it could be as the target of a trade-down or as a Day 2 prospect.

The Raiders said goodbye to veteran Pro Bowl center Rodney Hudson after the season, sending him to Arizona in a surprising trade that opened up a hole in the middle of the Las Vegas offensive line. Does that make center a draft priority for the Raiders?

If so, Humphrey is considered the best on the board. He’s a three-year starter and did not allow a sack in either 2019 or 2020, earning the Big 12’s Offensive Lineman of the Year award both seasons.

It’s rare to see a center with Humphrey’s blend of athleticism and power. Watch him make the shotgun snap, then pull all the way around the left end to lead the way on this outside run. Humphrey targets the middle linebacker and shoves him out of the play completely:

Center is another position that doesn’t usually carry first-round value, but as a trade-down target or a Day 2 pick, Humphrey has to be under consideration for the Raiders.