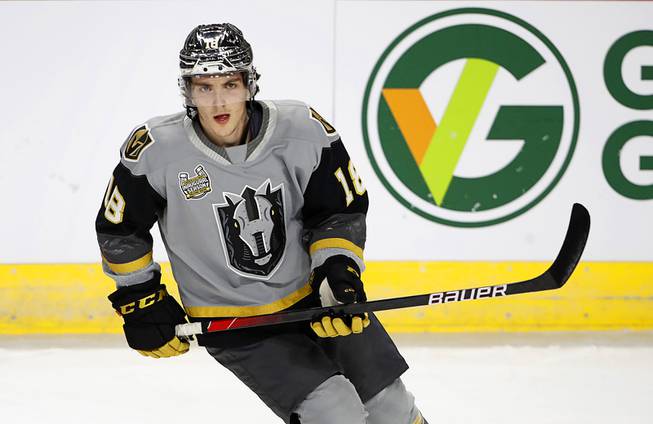 The Golden Knights’ top prospect is returning to the valley.

Forward Peyton Krebs completed his junior season in the Western Hockey League Tuesday night. He is expected to join the AHL Silver Knights within the next week, Silver Knights coach Manny Viveiros said.

It’s possible he ends the season with the Golden Knights, perhaps even joining the team for next month’s Stanley Cup Playoffs.

Krebs began the season in Henderson, picking up a goal and five points in five games with the Silver Knights. He has yet to make his NHL debut.

But because he turned 20 years old during the season, he still had junior eligibility, and his rights were owned by WHL Winnipeg.

A longstanding agreement between the junior leagues and the NHL meant if he were not in the NHL, he had to play in the WHL. He was ineligible for the AHL once junior season resumed in March after the pandemic delayed its start.

Viveiros said it’s possible Krebs will join the Silver Knights to complete their road trip this weekend, but he may not join until the team returns home next week.

Vegas had a similar situation two years ago when Cody Glass aged out of juniors following a dominant WHL season.

He joined AHL Chicago, then the Golden Knights’ affiliate, for six regular season games and 15 playoff games. But he didn’t make his NHL debut until the following season.

Krebs will likely play with Henderson for awhile, but there are no Calder Cup playoffs in the AHL this year because of the pandemic.

Vegas general manager Kelly McCrimmon said earlier this month Krebs could be playing with the Golden Knights by the end of the year.

“Before he left to go to Winnipeg, I felt he was a real important player on HSK,” McCrimmon said. “As he’s continued to develop over the year and again gets back on his feet in pro hockey with Henderson, it’s completely a possibility that he could be a factor for our team in the playoffs.”

It’s rare but not unheard of for a player to make his NHL debut late in the season and contribute in the playoffs.

In 2019, Colorado Avalanchestar defenseman Cale Makarcompleted his collegiate career at UMass, signed his entry-level contract during a playoff series and made his NHL debut mid-series. He won the Calder Trophy as the league’s Rookie of the Year last season.

Besides his time with the Silver Knight, Krebs was with the Golden Knights during last season’s postseason bubble in Edmonton.

“I don’t consider him your traditional junior coming out of junior hockey. I think he’s much more seasoned than that because of his experiences here in the last year,” Vegas coach Pete DeBoer said. “That’s great news for Henderson, great news for us depth-wise, because you can see with the injuries you’re going to need that depth at some point as we go forward.”