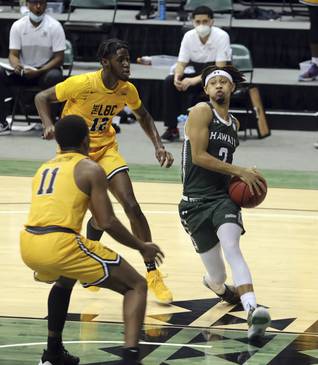 McCabe was a three-year reserve point guard at West Virginia, but as a former 4-star prospect he should assume a bigger role at UNLV.

In his 90 games at Texas, Hamm attempted just 140 total shots. That’s the kind of hard-working, defensive-minded presence UNLV is hoping to get from Hamm in his final year of eligibility.

Iwuakor was a premier shot-blocker coming out of high school in 2019 and can play above the rim. UNLV is aiming to unlock that potential after Iwuakor averaged 2.9 points and 2.6 rebounds last year.

A long, lanky, explosive swingman, Williams struggled to put it all together during his two years at Texas, as he averaged 3.3 points on 30.4% shooting last season. The upside is incredible if he ever figures it out.

Webster emerged as a multidimensional scorer last year, leading Hawaii with 12.3 points per game. He made 37.8% of his 3-pointers and shot a scintillating 58.3% inside the arc as well.

Justin Webster has a chip on his shoulder. And that could be a very good thing for UNLV basketball.

Webster transferred to UNLV from Hawaii last week, bringing a refined shooting stroke and a scorer’s mentality to the Ninth Island — a name affectionately given to Las Vegas because of its many Hawaii transplants. The 6-foot-3 guard averaged 12.3 points per game last season as a sophomore while knocking down 37.8% of his 3-pointers, numbers that make him the most proven offensive player currently on the UNLV roster.

But maybe more than his talent for putting the ball in the basket, it’s his attitude — which is quickly becoming emblematic of Kevin Kruger’s first squad—that could prove most impactful.

A former 3-star prospect out of Dallas, Webster believes he was under-recruited coming out of high school. He still hasn’t gotten over being rated the No. 287 player in the Class of 2019.

Despite his impressive stats over his first two years at Hawaii, he still takes special note of his doubters.

“People doubted me going to Hawaii and now I feel like they’re doubting me going to UNLV,” Webster said. “That just gives me more motivation.”

According to Webster, that’s a common theme of the 2021-22 UNLV team, which so far features six incoming transfers — many of whom, like Webster, are looking to prove people wrong.

Webster believes their collective hunger will fuel the UNLV program.

If all goes according to plan, winning will happen sooner than those outside the program expect. UNLV is undergoing massive roster turnover in the wake of T.J. Otzelberger’s departure, but Kruger is putting together a team of talented players who believe they can turn things around through sheer desire to prove they can.

Rebuilding year? Not if Webster and his band of merry misfits have anything to say about it.

That was one of the main reasons he chose UNLV.

“It came down to me believing in the coaching staff,” Webster said. “They said they want to win now. Coach Kruger said this is not a rebuilding year. They want to win the Mountain West and go to the tournament. Our mindset is solely on winning this year. We’re not trying to rebuild.”

UNLV was one of approximately 25 teams to reach out to Webster after he entered his name in the transfer portal. He said new assistant coach Carlin Hartman made the initial contact, and the two hit it off based on their previous relationship through the Oklahoma pipeline.

Jeff Webster, Justin’s father, was a tremendous college player at Oklahoma and is still the school’s third all-time leading scorer. Due to Jeff’s ties to the program, Justin got to know some of the coaching staff. He and Hartman have known each other for years, and he was also familiar with Kruger before entering the portal. Kruger’s dad, Lon, recruited Jeff Webster out of high school.

Justin Webster said he and the younger Kruger have bonded over the fact that they’re both following in the footsteps of very accomplished fathers.

If Webster can carry on the family tradition of scoring a lot of points, Kruger will be happy to have him at UNLV.

Webster wants to bring more than that, though.

“I feel like I bring a lot of shooting and scoring,” he said. “Obviously people know I can shoot the ball very well, but also I can score in many different ways depending on what’s being given to me: catch-and-shoot, off the dribble, getting to the basket, pull-ups. The coaches told me they’re going to put me in a position to be successful and put me in a position to do what I do. But my mindset is solely on winning.”