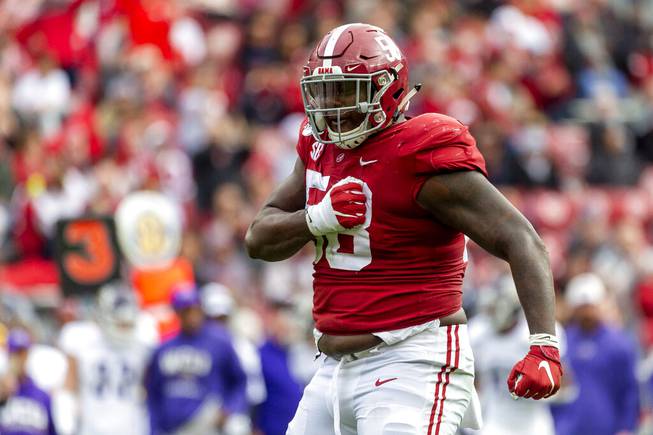 Alabama defensive lineman Christian Barmore (58) celebrates a sack against Western Carolina during the first half of an NCAA college football game in Tuscaloosa, Ala., in this Saturday, Nov. 23, 2019, file photo.

If the Raiders opt to use their first-round pick in Thursday’s NFL Draft on a defensive player, new coordinator Gus Bradley would certainly applaud the move, given Las Vegas’ current situation on that side of the ball.

After finishing 30th in points allowed (29.9 per game), 22nd in rushing defense (4.6 yards per attempt) and 25th in passing defense (7.3 yards per attempt), there is a case to be made for adding more talent at every level of the defense. Fortunately for Las Vegas, there is a good chance they’ll be able to draft an impact player when the team goes on the clock at No. 17 overall.

The Raiders may not be in the market for a defensive end, considering they added Yannick Ngakwoue to young vets Clelin Ferrell and Maxx Crosby. That’s a quality group of ends. But the middle of the line could definitely use an upgrade after Maliek Collins busted as a free-agent signing and the team cut Maurice Hurst Jr.

Christian Barmore could be the answer. At 6-foot-5, 310 pounds, Barmore was a wrecking crew at Alabama, constantly disrupting.

Watch this play against Notre Dame from the college football playoffs. Barmore thrashes through a pair of blockers at the snap and explodes into the backfield; he gets there so fast, the play is blown up before the quarterback can even get to his first read:

That play resulted in a sack, but Barmore is at his best when beating blockers and gumming up running lanes. That’s something the Raiders could certainly use after ranking in the bottom third of the league in run defense in 2020.

If this draft has one “sure thing” on the defensive side of the ball, it might be Parsons, who checks off every box as an inside linebacker.

He opted out of the 2020 seasons, but Parsons had already done more than enough in his first two seasons to ensure a first-round selection. As a sophomore, he made 109 tackles, registered 14.0 tackles for loss and had five passes defensed, and the numbers only tell half the story.

Parsons plays like a man possessed in the middle of the defense, chasing ball-carriers sideline to sideline to make crushing hits. He’s fast, powerful and cerebral.

Watch a college tight end attempt to block him on the edge here. It’s not a fair fight, as Parsons avoids the block and powers into the backfield to drop the runner for a loss:

The Raiders tried to revamp their annually disappointing linebacker corps last offseason by signing free agents Nick Kwiatkoski and Cory Littleton. The returns were mixed. But Parsons could give the franchise a young, homegrown talent around whom they can build a functional defense.

The only concerns with Parsons are off the field, as he was named in a hazing lawsuit and is generally knocked for immaturity. There’s no telling if Jon Gruden and Mike Mayock will take that into account when evaluating Parsons. But between the lines he is the real deal.

Collins was named the national defensive player of the year in 2020, and it was much deserved after the explosive campaign he authored.

Two of his four interceptions in 2020 went the other way for overtime walk-off touchdowns, and he blew up 7.5 plays for a loss in just eight games. He wrecked offenses with big plays week after week.

On this play he sniffs out the handoff, crashes through the line with perfect timing and levels the running back for a safety:

From a physical standpoint, Collins is a monster at 6-foot-4, 240 pounds. There just aren’t a lot of linebackers that size, at any level. And yet Collins flies around the field, making impact plays against the run and pass. Most mock drafts project him to be available when the Raiders pick.

Another linebacker who could make sense for the Raiders is Owusu-Koramoah, who offers extreme versatility and playmaking as a prototype weakside OLB.

Owusu-Koramoah is elite in pass coverage, with the ability to smother running backs and tight ends, and he can even flex out against slot receivers and cover down the field like a defensive back.

That’s what he does on this play, as he shadows a slot receiver through a double move, stays in phase and goes up for the interception:

The Raiders used a first-round pick on a cornerback just last year, but after the rookie season turned in by Damon Arnette, it’s fair to consider Las Vegas still in the market for a coverage man.

That’s Farley’s thing. More than any other corner in the draft, he is able to mirror receivers and stick close in coverage regardless of the route. And when he gets around the ball, he makes things happen; he opted out of the 2020 season, but in 2019 he notched 16 passes defensed and four interceptions.

Watch him completely blanket the receiver on this out-route and come away with the end zone interception:

Farley comes with big-time injury concerns. An ACL tear cost him his freshman season, and a back injury suffered while lifting weights required surgery and forced him to miss the run-up to the draft. Most mock drafts still have him in the first round. If healthy, Farley might be able to walk into training camp this summer as the Raiders’ top cornerback.

While Samuel has the speed and athleticism you want at cornerback, it’s his understanding of the position that is going to allow him to excel in the NFL for a long time.

A three-year starter at Florida State, Samuel got better each season and was dominant in 2020, registering three interceptions and six passes defensed in eight games. When it comes to little things like anticipation, positioning, getting his head around, and fighting through the receiver’s hands, few youngsters do it as well as Samuel.

This play is from his freshman year, but watch him go step for step with a receiver 56 yards downfield, stay connected, and break up the pass at the catch point:

That’s an elite combination of speed, athleticism and awareness. After allowing 263.2 passing yards per game last year (25th in the NFL), Las Vegas could use a player with Samuel’s skill set.

The Raiders might have had the worst safety situation in the NFL last year, and an offseason signing of Karl Joseph probably isn’t going to do much to move the needle in 2021. So this is squarely a position of need, and Moehrig appears to be the best available in this draft.

Moehrig won the Jim Thorpe Award as the nation’s top defensive back after intercepting two balls, logging nine passes defensed and making 2.0 tackles for loss in 2020. He is big enough to make an impact in the running game (6-foot-1, 205 pounds), and he’s athletic enough to bring plus coverage skills to the table.

On this play, Moehrig comes down and plays man coverage against a slot receiver. He locks in and trails the receiver all the way across the field on a dig route, and he shows good burst at the end to cut in front and make the diving breakup:

It’s safe to say the Raiders didn’t have a safety capable of making that play on their roster last year.

When accounting for the player’s skill set, the draft value at No. 17 and the team’s positional needs, a case can be made for Moehrig being the best fit for Las Vegas in the first round.