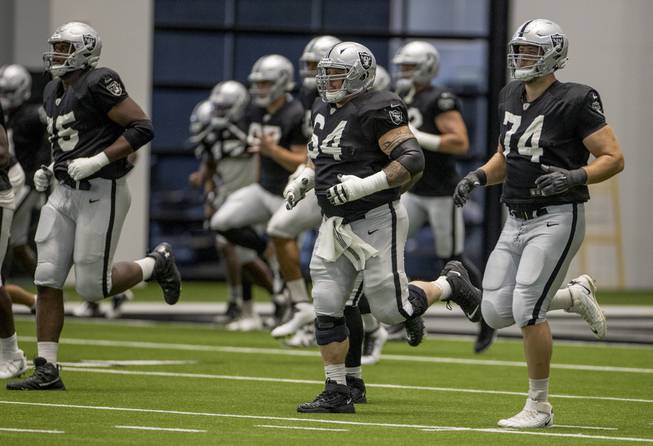 Raiders general manager Mike Mayock says he doesn’t pay attention to the outside reaction to his personnel moves, but he somehow caught wind of the consensus of his dismantling of the team’s existing offensive line during free agency last month.

Consider him unamused by punchlines and memes of Las Vegas quarterback Derek Carr running for his life after the team traded away three of five starters along an offensive line it regularly touted as the best in the NFL. He doesn’t agree with the underlying message either.

“It’s funny because the public perception is, ‘Oh the Raiders, they made a bunch of moves on the offensive line, therefore they’re going to be worse there,’” Mayock said. “I’m kind of energized by it, to be really honest with you.”

Las Vegas enters the start of tonight’s NFL Draft in Cleveland with a hole or two to fill up front. There’s a strong expectation that the Raiders will address their offensive line need with the No. 17 overall pick. Highly rated prospects like Oklahoma State tackle Teven Jenkins, USC guard/tackle Alijah Vera-Tucker and Virginia Tech tackle Christian Darrisaw are all predicted to go around the Raiders’ range.

If Las Vegas passes on the position with its lone first-round pick and goes elsewhere — defensive back and linebacker are also areas of need — then pressure will be amplified on it to use at least one if not two of its three picks on Friday’s second day there. Las Vegas currently holds the No. 48 overall pick in the second and the No. 79 and No. 80 overall picks in the third round.

The Raiders will almost surely wind up with some offensive-line help by the end of the day Friday, but even if they don’t, fans should hold off on fearing for Carr’s safety.

“We have all the respect in the world for Rodney, Gabe and Trent, but at this point, we made a conscious decision to try to get younger, maybe a little more athletic and let’s go,” Mayock said. “I can’t wait to see how we react.”

With the NFL salary cap diminishing following a season of lost revenue contested mostly without fans in stadiums, Las Vegas had to cut roster costs somewhere. Offensive line was an obvious choice.

The team freed up nearly $25 million by trading Brown to the New England Patriots and Jackson to the Seattle Seahawks — and picked up a couple draft picks in the process (a third- and fifth-round choice, respectively). The Raiders manufactured more than $5 million in additional savings by restructuring guard Richie Incognito’s contract via releasing then resigning the veteran.

The response to the trades turned out more surprising than the swaps themselves. At this time a year ago, the Raiders were reportedly shopping Jackson and it was somewhat of a surprise that he wound up coming back for a seventh season with the franchise. The right guard was serviceable if not mediocre last season and recouping any value for him represented a win.

Brown similarly appeared to create more trouble than he was worth, his record-breaking four-year, $66 million contract signed in 2018 now looking outrageous in hindsight. The former All Pro and Super Bowl champion played in only five games last year. Some of the missed time was in no way his fault — including a lengthy COVID-19 battle and a terrifying IV mishap — but questions of desire and work ethic that had earlier dogged his career seemed to reappear with the Raiders.

The revered offensive line many are disappointed about losing played all of one series together last season — a three-and-out to start the year in Carolina.

Hudson is the one departing piece the Raiders may really miss, as center is one of the hardest positions to replace and he was arguably the NFL’s best over the last five years. But Las Vegas wouldn’t have moved on from Hudson if it didn’t have confidence in backup Andre James, a former undrafted free agent the franchise has molded the last two seasons.

The Raiders also brought in former Texans starting center Nick Martin for insurance. For as terrific Hudson had been since joining the Raiders in 2015, he’s turning 32 years old this summer and was arguably not the team’s most valuable blocker for the first time last season.

Left tackle Kolton Miller might have been the unit’s best performer in the 2020 season and the team prioritized keeping him as he enters his prime at 25 years old. It was time for a change and now Miller ascends to the role previously held by Hudson as the leader of the offensive line.

“Things got moved around and a lot and that happens with teams, right?” Miller said. “But I feel really confident in our group and steps going forward. I have the utmost confidence in the staff. I’m going along for the ride and I’m for it. I feel good about it.”

Miller signed a three-year, $54 million extension this summer with Mayock declaring him “a cornerstone.” The 2018 first-round pick wasn’t a standout at first, but he’s steadily progressed for three straight seasons into one of the league’s better tackles.

If Mayock can find a tackle capable of mirroring Miller’s trajectory on the other side of the line this year, the Raiders will be set. Truth be told, they might be set already.

They brought back last year’s ultimate utility lineman, Denzelle Good, and were encouraged by the progress shown by last year’s fourth-round pick, guard John Simpson, late in the season. There’s a chance that James, Simpson and Good could fill the starting spots around Miller and Incognito themselves without much drop-off.

The Raiders also return fourth-year tackle Brandon Parker, who infamously was eating breakfast expecting to be inactive last year in Cleveland when he got a call that he would be thrust into action in a couple hours. That type of last-minute juggling became the norm for the Raiders’ offensive line last year, and they got through it without a sharp decline in on-field production.

Defensive issues at every level far outweighed any problems they had blocking and should arguably continue to take precedence in the draft. If Las Vegas could manage that injury- and issue-plagued campaign, then it can deal with breaking in some youth this year.

The concerns about the new-look front might just be another example of Carr being underestimated. The Raiders’ veteran quarterback has one of the quickest releases in the league.

The team’s low allowed sack rates for the past couple seasons has more to do with Carr than those playing in front of him. As long as the Raiders surround their quarterback with a decent level of talent on the offensive line, he’s going to produce around the same clip.

No matter what happens in the draft and despite an offseason exodus, they’re going to have a decent level of talent on the offensive line.

“We think we’re getting younger,” Mayock said. “I’m excited and energized by what our offensive line room is starting to look like.”