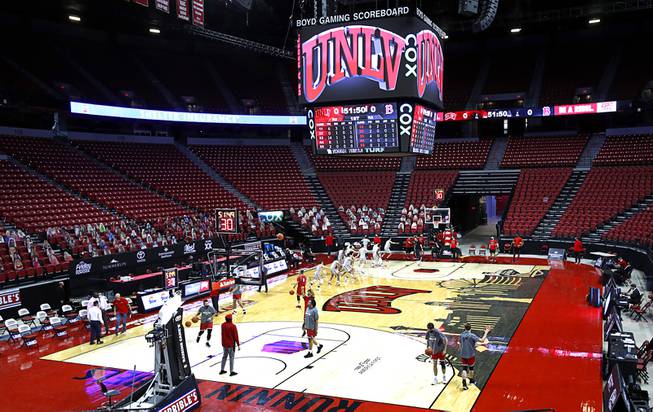 Players warm up before a game between the UNLv Rebels and the Benedictine Mesa (Ariz.) Redhawks at the Thomas & Mack Center Thursday Jan. 21, 2021.

Baker, a 6-foot-2 Arizona native, spent two years at Hutchinson CC (the same school that produced former UNLV forward Shakur Juiston) and scored efficiently during his time there. As a freshman he scored 13.7 points per game while making 48.7% of his 3-point attempts; in a truncated sophomore season (16 games) he upped his scoring average to 16.6 points while connecting on 41.8% from long distance.

UNLV closed strong in recruiting Baker. Two weeks ago he announced his final three as Houston, Rutgers and Loyola Chicago, but Kruger and his staff were able to successfully make the case for the scarlet and gray.

A quick look at what Baker’s commitment means for UNLV:

In the first wave of transfer additions, Kruger mostly focused his efforts on adding size, length and defensive-minded players to the roster. But in the last two weeks UNLV has complemented those early signings by bringing in a trio of expert shooters to boost the offense.

First the program got a commitment from Hawaii transfer guard Justin Webster, who scored 12.3 points per game and hit 37.8% of his 3-pointers as a sophomore at Hawaii last year. On Wednesday Kruger got a pledge from Kent State guard Mike Nuga (17.8 points, 38.5% from 3 last year as a senior). And now they’re welcoming Baker, another plus shooter and scorer.

In the span of one offseason, UNLV has gone from a team that was limited in terms of talent and depth in the backcourt to a squad that looks like it will be able to rotate multiple quality guards through the lineup. That’s a win for Kruger.

With Baker on board, UNLV now has one open scholarship remaining for the 2021-22 season. Here’s how the roster stands as of now:

Had incoming 2021 recruit Arthur Kaluma stuck with UNLV, the roster would be set for next year. But the top-50 prospect de-committed over the weekend and will head elsewhere, leaving Kruger with one more open spot to get to the allotted 13 scholarships.

So far most of the offensive-minded additions have been in the backcourt. Could UNLV pursue a skilled frontcourt player to bring some scoring balance to the lineup?

If there’s one category in which UNLV is almost certain to be improved next year, it’s free-throw shooting.

The 2020-21 backcourt of Bryce Hamilton, David Jenkins and Caleb Grill was collectively shaky at the stripe, combining to make just 113-of-161 (70.1%). Jenkins did most of the heavy lifting there, hitting 77.3% while Hamilton and Grill both languished at 65%.

Raiders could go several directions in first round