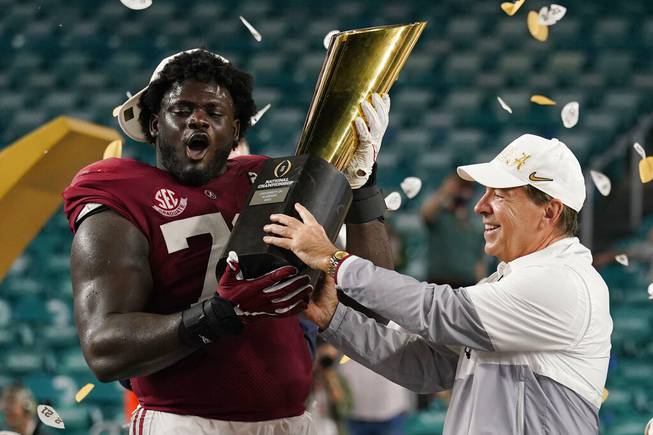 Since Jon Gruden returned to the Raiders before the 2018 draft, he has been on a peculiar mission. That mission: To field two stud offensive tackles, by any means necessary.

That’s why Gruden chose an offensive tackle with his first selection in the 2018 draft, nabbing Kolton Miller out of UCLA with the 15th overall pick. The following offseason, Gruden continued his Captain Ahab-like quest by giving Trent Brown the biggest free-agent contract ever for an offensive lineman.

While Miller grew into his role as the franchise left tackle, Brown flamed out on the other side of the line, suffering through two injury-plagued campaigns before being jettisoned to the New England Patriots this offseason in a trade for a late draft pick.

So it shouldn’t come as a surprise that Gruden got back on his horse and took another shot at landing his second foundational tackle on Thursday, when he took Alabama blocker Alex Leatherwood with the No. 17 pick.

The move was widely viewed as a reach, as higher-rated tackles such as Virginia Tech’s Christian Darrisaw and Oklahoma State’s Teven Jenkins were still on the board at the time, but Gruden and general manager Mike Mayock have proven they’re not concerned with conventional wisdom when it comes to evaluating college prospects. They identified Leatherwood as their guy, homed in on him and didn’t hesitate to make him a linchpin of the team’s reconstructed offensive line.

For all the questions about draft value and reaching and not trading down, the most important way to evaluate the pick will be whether Leatherwood can do the job on the field.

There’s no doubt he was a beast at Alabama, as the 6-foot-4, 312-pound Florida native started his final three years with the Crimson Tide and blocked for some of the most explosive offenses in college football. He earned All-SEC honors in 2019 and 2020, and as a senior last season he was named to the All-America team.

It’s easy to see why Gruden fell in love with Leatherwood during the draft process.

The first thing that stands out about Leatherwood is his ability to push defenders downfield in the running game. On this play, he fires off the ball and into the second level, where he targets a linebacker and simply overpowers him, driving him 15 yards past the line of scrimmage and taking him completely out of the play:

Not only does it take mammoth strength to do that, it takes quick feet and good recognition of angles. Leatherwood certainly has those skills.

Watch how fast he gets to the inside linebacker on this play, and then how completely he walls him off from the running lane:

Las Vegas running back Josh Jacobs is an expert at slipping through the tiniest of openings; Gruden probably envisions Leatherwood jumping out to the second level and opening up actual holes for Jacobs, allowing him to break big plays on a more regular basis.

The passing game is where Leatherwood will likely need work. His nimble feet don’t quite translate to pass protection, as edge rushers were too often able to beat him with quickness and change of direction moves.

Against Notre Dame in the college football playoffs there were some plays where Leatherwood was left grasping at air as his man rushed past him. Here he is beaten so badly and so quickly he is forced to reach back and commit a blatant holding penalty in order to keep his QB from getting killed:

Leatherwood holds up much better when rushers try to take him head-on with power. He can stonewall with the best of them:

The advanced stats seem to mesh with the eye-test conclusion that Leatherwood is a strong run-blocker who has to improve in pass protection. According to Pro Football Focus, Leatherwood posted a run blocking grade of 85.4 last season, while his pass-blocking grade lagged behind at 73.4.

Ultimately, you’d probably like to get a more refined prospect when using a first-round pick on a lineman, but Leatherwood has talent. The task of molding him into the right tackle Gruden has always wanted will fall to offensive line coach Tom Cable, who has done a good job with the Raiders’ unit in recent years, so odds are good Leatherwood will get up to speed.

If Las Vegas can iron out the wrinkles and get Leatherwood to reach his full potential, fans probably won’t care that he was taken a dozen picks too early on draft day — they’ll be too busy watching him pave the way for Jacobs and Derek Carr to do their thing.