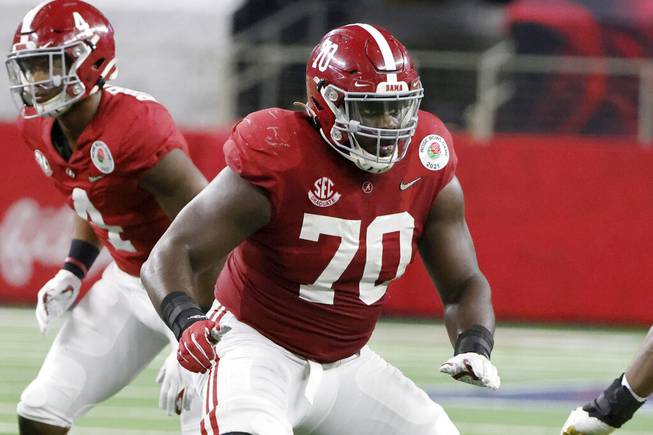 Alex Leatherwood’s path to the Las Vegas Raiders began nearly three years ago, before Mike Mayock had even become the franchise’s general manager.

Mayock was breaking down game film of defending national champion Alabama in 2018 as part of his duties as a draft analyst for NFL Network, likely zoning in on the Crimson Tide’s departing players when a sophomore caught his eye. The 6-foot-6, 312-pound Leatherwood, then at guard, caught Mayock’s eye with his aggressive, fleet-footed blocking.

“I just started laughing like, ‘This guy is going to be their left tackle next year,’” Mayock remembered. “And, of course, he was.”

From left tackle at Alabama to right tackle in Las Vegas.

Mayock confirmed that the Raiders’ plan is to immediately start Leatherwood at the tackle spot opposite Kolton Miller next season — he can also play guard — after they used the No. 17 overall pick on the 22-year-old from Pensacola, Fla. Thursday night.

Mayock also defended the admittedly “controversial” first-round pick after Leatherwood was more commonly given a second-round grade going into the draft. The Raiders considered trading down and attempting to take Leatherwood later in the round, but Mayock said the team only drew “a poor offer” from a team also in need of offensive-line help.

Las Vegas wasn’t going to risk missing out on the player they wanted.

“He was the highest-rated player on our board at the time, offense or defense,” Mayock said.

Some may regard Leatherwood as a reach from a talent perspective, but there’s no disputing he’s a fit from an intangible or “pedigree” viewpoint. Mayock and Raiders coach Jon Gruden have continually shown they prefer the type of fiery players from powerhouse programs like Leatherwood since taking the helm with the Raiders.

The duo had already taken an Alabama player in the first round in each of the last two years — not to mention five total Clemson products throughout the draft — and often touted the choices’ character and competitive nature. Leatherwood was a direct match in this regard as a three-year starter for the best program in the nation who ascended to one of four captain spots for his senior season.

“Being a captain, of course, I feel like it was a great honor,” Leatherwood said. “I feel like it definitely helped me for this pre-draft process because it showed the teams and coaches and GMs how much effect I can have on my team and the type of player that I am and what I’m all about because it was team and not coach-appointed.”

After NFL commissioner Roger Goodell called his name from the podium at the draft in Cleveland, Leatherwood showed off his feet with a dance as the cameras cut to his draft party at a beach house in his hometown. What the broadcast didn’t catch was his reaction to the call from Gruden informing him he was the Raiders’ pick.

The way he took the news was telling as to why the Raiders were drawn to him, as Leatherwood said he wasn’t “overwhelmed” but instead serious and under control. He already had his game face on.

Las Vegas is counting on it being “go time” for its running game behind Leatherwood. One knock on Leatherwood coming into the draft was that he was more adept in the run game than the pass game in an NFL that every year trends more towards the latter.

But that wasn’t a detriment to the Raiders. Frustrated by a rushing attack that lacked explosion a season ago — the Raiders ranked in the bottom half of the league with only nine running plays of more than 20 yards — Mayock envisions Leatherwood making a big difference blocking for former Alabama teammate Josh Jacobs.

Leatherwood said he was open to playing anywhere up front in Las Vegas, but Mayock has him pegged for the right tackle spot left open after the team shed salary on the offensive line last month. The hope is that offensive line coach Tom Cable can bring the best out of Leatherwood and repair some of his weaknesses, which include pass blocking and handwork.

Leatherwood “might have been (Cable’s) favorite player in the draft,” according to Mayock, and he wasn’t far off the top for anyone in the Raiders’ headquarters in Henderson. They couldn’t pass on a player they regarded so highly at arguably their biggest position of need.

“When the second floor in our building, which is all the coaches, and the third floor, which is all the scouts, when we’re all united on a conversation like Leatherwood, that makes me like the pick,” Mayock said.