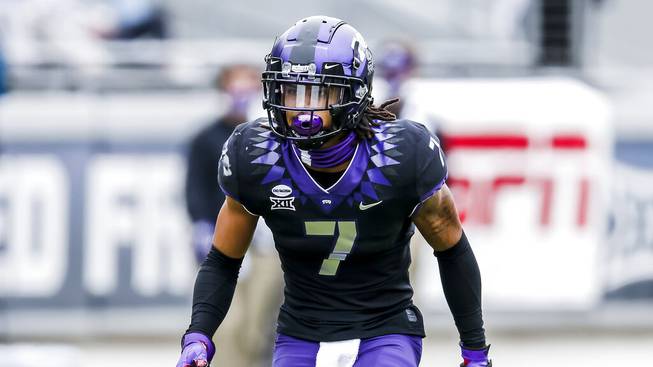 The Raiders had a huge, massive, glaring problem in 2020: Their safeties couldn’t cover anyone in the passing game.

In the modern NFL, that’s an issue that will absolutely sink a team. And sure enough Las Vegas’ achilles heel seemed to pop up at the most inopportune times, like when Patrick Mahomes isolated second-year safety Johnathan Abram in the deep middle of the field for a game-winning touchdown pass to Travis Kelce with 34 seconds left in their Week 11 matchup.

By aggressively trading up for the No. 43 overall pick, the Raiders took a big step toward making sure that kind of situation never happens again, as they selected the best coverage safety in the draft in TCU star Trevon Moehrig.

Like the Raiders’ first-round pick, offensive tackle Alex Leatherwood, Moehrig projects as an immediate starter at a position of need.

Moehrig, a 6-foot-1 missile, was often asked to play the deep middle of the field in TCU’s defense, which is similar to how he’ll be used in Gus Bradley’s defense. He killed it in that role for the Horned Frogs, racking up six interceptions, 20 passes defensed and 109 tackles over the last two seasons. In 2020 he picked off two balls and won the Jim Thorpe award, given to the nation’s best defensive back.

Due to the similarities between the safety play in TCU’s defense and Bradley’s scheme, Moehrig’s skills should translate to the NFL level.

The most important skill he’ll bring to the Raiders’ secondary is his ability to run with receivers. He can line up across from tight ends and slot receivers and track them across the field, like he does on this play. Not only does he go stride-for-stride with the slot man, he has the burst and athleticism to get horizontal and break up the pass:

You’re simply not going to see that type of play from Abram or Jeff Heath.

Moehrig also has range to protect against deep routes, with the awareness to diagnose route combinations and the speed to get all the way to the sideline to provide help to his cornerbacks over the top.

On this play, Moehrig understands that the time and score situation obviously dictates a deep throw, and he anticipates the pass. The cornerback slips, allowing the receiver to run free, but Moehrig easily gets there in time for the game-sealing interception:

Moehrig has a natural understanding of the passing game and just knows where to be. According to Pro Football Focus, Moehrig was the top-rated coverage safety in the draft.

With Moehrig roaming the back end in coverage, the Raiders can tether Abram to the box as a strong safety, giving him the simple task of running to the ball and hitting people, which is what Abram does best. So the addition of Moehrig should actually improve the Raiders at two positions.

And Moehrig can provide support in the box as well. He’s not a knockout artist like Abram, but when he diagnoses a play early he has no problem speeding downhill and delivering a hit. Watch him sniff out this tight end screen, blow by his blocker and make the stop behind the line of scrimmage:

After Moehrig was picked, reports surfaced that he dropped out of the first round due to injury concerns, but if he’s healthy in 2021 there is little doubt the Raiders improved their secondary and their entire defense by adding him.