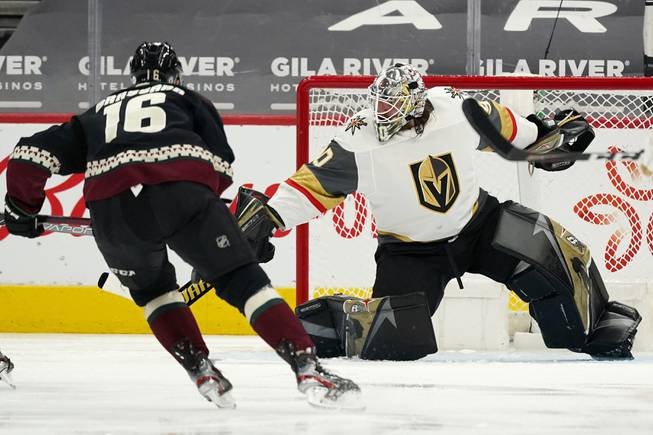 They had to lose eventually.

The Golden Knights saw their 10-game winning streak end Friday when they were shut out for the third time this season and fell to the Arizona Coyotes 3-0 at Gila River Arena. It was the longest winning streak in team history and longest in the NHL this season.

“We’ve won 10 of our last 11 games,” captain Mark Stone said. “I joked with the guys, we’re not the Harlem Globetrotters; you can’t win them all.”

Stone also mentioned that the Golden Knights seemed to suffer an emotional letdown after a big win against Colorado on Wednesday to extend the winning streak. By contrast, the Coyotes are fighting an uphill battle for the playoffs and needed a win.

It was clear which team was more dialed in over the course of three periods. The first period for the Golden Knights wasn’t bad with 11 shots on goal, even if they finished the frame in a 1-0 hole. Max Pacioretty had a breakaway chance early in the game, and Vegas had five high-danger scoring chances, according to Natural Stat Trick.

The offense disappeared after that, though, with just three high-danger chances the rest of the game. The Golden Knights had only 14 shots in the second and third periods combined, including a nearly eight-minute stretch without a shot in the second.

It was only a 1-0 deficit heading to the third after a John Hayden goal in the first, but the Coyotes added to it 90 seconds in on a Michael Bunting rebound tally. Vegas never managed much of a comeback, and Christian Fischer put the game to bed with an empty-netter with 2:37 to go in the third.

“We hold ourselves to high standards every single night, everyone holds each other accountable, and when you don’t come out with a win, it’s obviously not a great feeling,” defenseman Zach Whitecloud said.

There were two oddities about losing to the Coyotes on Friday. The first is that despite a 28-save outing where he was solid for most of the night, Robin Lehner fell to 12-2-2 this season. Both of his regulation losses this season, the only two in his regular season history with Vegas, have come on the road in Arizona.

The second is that the team that ended Vegas’ winning streak was also the team that started it — Vegas beat Arizona 7-4 on April 9 and didn’t lose in the three weeks since.

That alone is a major accomplishment. In the century-plus-long history of the NHL, there have only been 28 winning streaks longer than the 10 Vegas strung together. Seven franchises have never hit double digits. The Golden Knights used the last three weeks to surge to the top of the West Division, a perch they hold with a four-point lead after the Avalanche’s win Friday.

So it was disappointing for it to end, even if everyone knew it would eventually.

“This is a hard league to win two in a row, let alone 11,” coach Pete DeBoer said. “It was a lot of little things that added up to a loss.”

The good news for the Golden Knights is they get another stab at the Coyotes on Saturday night to complete the season series. Players were well aware of that fact, and for the most part shrugged off the loss as simply part of a long season — as Stone said, you don’t get to play the Washington Generals every night in the NHL.