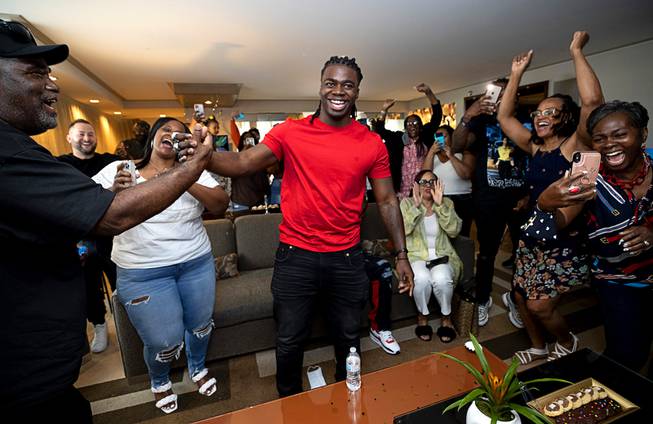 Rhamondre Stevenson, center, a Centennial High School and Las Vegas Sun player of the Year in 2015, is congratulated by family and friends in a suite at Aria, after he is drafted by the New England Patriots in the fourth round Saturday, May 1, 2021.

The Miami Dolphins were one of the teams that could have drafted running back Rhamondre Stevenson on Friday night.

Miami was in contact with the Centennial High product ahead of the three-day draft and had a need for a bruising rusher. The 6-foot, 245-pound Stevenson certainly fit the bill, catching the eye of Dolphins coach Brian Flores, who worked with the former Oklahoma standout in the Senior Bowl and raved about him as a “big back with great vision.”

Stevenson was watching the draft in the back room of a suite at the Aria with about 40 friends and family members, spending nearly an hour before the Miami pick chatting with his father, grandmother and sisters.

He would frequently peek over at the draft on the television, especially when picks were being announced, but didn’t seem preoccupied.

After the Dolphins’ pick, however, he slowly got up and made his way over to his agent, Brian Hannula. Hannula constantly referred to a sheet with the draft order and a list of the needs of all 32 teams.

He would rotate between glancing at the sheet and messaging with sources on his cell phone. Hannula had an honest conversation with Stevenson about being picked Friday, when they hoped they would squeeze into the second- or third-round, but the chances were starting to look slim.

“There are four legit possibilities — the rest would be a complete shock,” he said of the remaining handful of picks in the third round.

One of the final possibilities, the 49ers, took running back Trey Sermon of Ohio State with the 88th pick.

Stevenson would be forced to wait another day to realize his NFL dream.

Shortly after 10 a.m. Saturday, with family and friends back at the Aria, and after another running back had been taken by the Jets, Stevenson’s phone finally rang.

The Patriots were on the other line to inform him he would be their fourth-round selection with the 120th overall pick.

In the few minutes from the phone call to hearing his named called, Stevenson couldn’t help but think about the journey. He was out of football for a year after high school because of poor grades and then a backup at a junior college before developing into a prospect.

Concerned faces of supporters also waiting for him to be picked quickly turned to smiles. Soon there were hugs all around.

Stevenson was excited, relieved and ready for what’s next with one of the NFL’s most successful franchises.

He’s being compared to LeGarrette Blount, who won two Super Bowls with the Patriots including in the 2016-2017 season when he had a career year with 1,161 rushing yards and 18 touchdowns.

“It’s a great feeling knowing I have Bill Belichick as a head coach,” Stevenson said in a conference call with reporters.

Stevenson declared for the draft shortly after rushing for 186 yards and a touchdown against Florida in the Cotton Bowl and being named the game’s Offensive MVP. After serving a suspension to start the season, he returned for the final five games — all Oklahoma wins — and rushed for 665 yards and seven touchdowns.

In 2019, he averaged eight yards per carry in working his way into the regular rotation with the Sooners and eventually scoring the game-winning touchdown in overtime of the Big 12 Conference championship game.

It was one of two championship rings he sported during the draft.

“When he got to Oklahoma, I knew he was on his way (to the NFL),” his dad Robert Stevenson said.

Stevenson was hurt during his senior season at Centennial and drew no scholarship offers. Even if a Division I school had wanted him at the last minute, he was a non-qualifier academically.

His entire life had revolved around preparing for the next game or season. Now, there was no practice, schedule or teammates. Stevenson enrolled part-time at the College of Southern Nevada, played too many video games — Madden, of course — and worked out independently.

The plan was to get his academics in order and then pursue a college roster spot. But that path regularly fails many players as they lack the motivation and realize the football dream is a longshot not worth investing it.

They find it easier to just get on with life and join the workforce. Not Stevenson.

“His demeanor is hard to read,” his mother Juran Stevenson said. “Whether he’s happy, said, excited or mad, his face never changes. Yet he was even more quiet. He missed football. He saw how his life would be without it, and that motivated him.”

Tishawn Barnaby and Juan Rodriguez are more than Stevenson’s former teammates at Centennial. They grew up playing in youth leagues together and shared a similar passion for the sport.

They both secured roster spots at Cerritos College in Norwalk., Calif., and urged Stevenson to tag along. There’s no fourth-round pick from the Patriots without Stevenson’s decision to join them.

They lived in the same apartment for two years and took turns looking out for each other in down moments. Barnaby and Rodriguez had to keep Stevenson’s spirits in order when he wasn’t playing much as a freshman.

Stuck low on the depth chart, he had only 501 rushing yards. But he was productive with his opportunities, averaging 7.4 yards per carry, and his friends weren’t the only ones who realized his potential.

Middle Tennessee State offered Stevenson a scholarship in the offseason. He rarely shows emotion, even to his family, but the day he received his first offer was different.

After years of being told he couldn’t play Division 1 football, he couldn’t contain his emotions. It was pure jubilation, Barnaby recalled. It was almost like all three friends were sharing the accomplishment.

Stevenson broke out as Cerritos’ featured back in 2018, rushing for 2,111 yards and 16 touchdowns to become the No. 1 ranked junior-college running back in the nation. He averaged an eye-popping 9.5 yards per carry.

Three years after needing to decide if he wanted to continue with football, Stevenson had another decision to make about his future — Oklahoma, USC or Texas?

“Of course, I had doubts in my head if I would ever play again,” he said of the year he was forced to take off. “But it’s my love of football. I couldn’t imagine my life without it.”

Rodriguez remembers the touchdown run as if it were yesterday. On the final play of the fourth-grade championship game, he took a handoff and found himself in the open field. He only needed to outrace one player — Stevenson, who was the best (and biggest) player on the field since elementary school.

“Man, I have to play against this kid every time,” Rodriguez remembers thinking to himself.

But Rodriguez abruptly hit the brakes, watched Stevenson fly by and found the end zone for a 60-yard score and championship victory.

Part of the excitement of draft week was reuniting with old teammates and rehashing stories.

One game is always the first discussed — As a junior at Centennial, Stevenson went 81 yards for a touchdown on the first play of a playoff game against defending state champion Bishop Gorman. Outside of scoring the winning touchdown in the Big 12 Conference championship game, that prep football touchdown stands out as one of Stevenson’s favorite moments.

Centennial recovered an onside kick and sensed an upset coming until Rodriguez threw an interception on the ensuing drive. They lost in lopsided fashion. They all laugh thinking back to the night.

Even when Stevenson left for Oklahoma, the friends were constantly in contact through text messages and social media. They even traveled to Norman, Okla., for a few games.

The bond was strengthened from living together in a two-bedroom apartment during their junior college days. Barnaby had one room; Rodriguez the other. Stevenson took the sofa. They rallied each month to afford the $1,700 in rent.

When a friend visiting from Las Vegas took Stevenson out to dinner, he only ate half his food. He brought the rest back for his friends.

With each of Stevenson’s accomplishments, the friends share in the successes and feel as if they’re in on the accomplishment. And when Stevenson struggles, they are a phone call away with encouragement.

When they learned Stevenson was having a draft party in their hometown, they traveled in from Philadelphia where they work remodeling hotel rooms.

“We knew he’d be in this spot,” Barnaby proudly says.

Rhamondre Stevenson, a Centennial High School graduate and Las Vegas Sun player of the Year in 2015, gets a phone call while watching the NFL draft on television in a suite at Aria Saturday, May 1, 2021. Stevenson was drafted by the New England Patriots in the fourth round

Fullback Alec Ingold represented the Raiders at the draft on Friday where he announced both of Las Vegas’ third-round picks. First, he delivered an enthusiastic message to the nationally televised audience about the importance of mothers and not forgetting to call home on Mother’s Day.

The prompted Stevenson to shout out across the room in the direction of Juran Stevenson — “Love you, mom.”

Juran Stevenson’s schedule for the two years her son played at Cerritos rarely included a day off. She frequently would return home from her second job at 3:30 a.m., only to awake a few hours later to start the grind all over again. A lab technician, she logged 72 over two jobs at Comprehensive Cancer Centers and Summerlin Hospital.

Cerritos, like most junior colleges, didn’t offer scholarship money or assistance with room and board. Barnaby and Rodriguez picked up part-time jobs to help pay their way, but Juran Stevenson refused to let her son work.

His job was to keep current with his studies and football. It was a sacrifice, but nothing she wouldn’t have done for any of her seven children. There have been plenty of proud moments along the way.

Take the day she was wearing a homemade jersey of her son during his first game at Oklahoma when a fan approached.

“Oh my gosh, you are Rhamondre’s mom,” Juran remembers the fan saying. “I love him. Thank you for making him.”

While most of the family was busy mingling in the hotel suite with the draft on the television in the background on Friday, Juran Stevenson at times seemed distracted as she kept a close eye on every pick.

She wanted the wait to end for her baby. That finally happened Saturday, creating a hug many years in the making for mother and son.

“I wouldn’t be here if it weren’t for the sacrifices of my family,” Rhamondre Stevenson said. “They raised me right. They kept me motivated.”