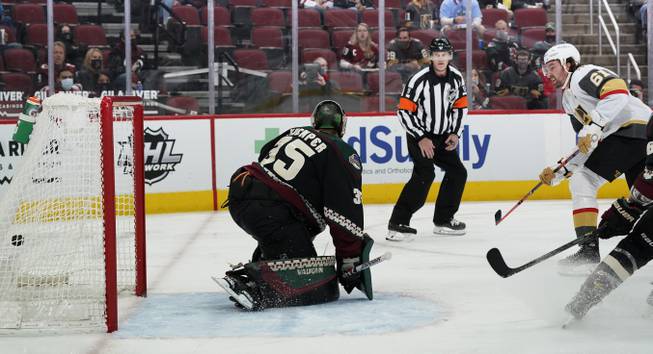 A two-goal lead is usually safe for the Golden Knights. It took a little extra on Saturday, but Vegas still came out on top.

The Golden Knights gave up a pair of goals in the third period to erase a two-goal lead and send the game to overtime at Arizona, but Jonathan Marchessault came up with the power-play winner in extra frame to boost Vegas to a 3-2 victory over the Coyotes at Gila River Arena.

There was added motivation for Marchessault in overtime after he took a slashing call in a tie game with 2:40 remaining. It didn’t hurt Vegas, but he was happy to be the one to win it.

“I didn’t want to take a penalty, especially at that time of the game with the momentum on their side,” Marchessault said. “Obviously it felt pretty good to get on the board tonight.”

That momentum came a courtesy of third-period goals from Christian Fischer and Christian Dvorak that eradicated Vegas’ lead it built up over the first two periods. Dvorak’s was a power-play goal, ending the Golden Knights’ streak of 21 consecutive killed penalties.

Once overtime started, the Golden Knights found themselves on the power play after a too-many-men call for the Coyotes. Some nifty movement around the perimeter set up a Marchessault slapper, his first overtime goal this season, and Vegas’ second power-play goal in overtime.

The Golden Knights improved to 7-0 in games decided in overtime, the only team in the NHL not to lose in the extra frame (they have two shootout losses).

“We’re very hungry to score that goal, I guess, in overtime,” forward William Karlsson said. “It was very nice to see the man advantage pay off tonight.”

Karlsson netted the only goal in what was a dominant first period for the Golden Knights. Vegas refused to leave the zone even after a power play expired, carrying over the momentum and converting it into a goal. Karlsson drove to the net and slammed on the breaks feet-first, allowing Jonathan Marchessault’s shot to go off his skates and into the net at 10:15 of the first.

In the first period Vegas led in shots on goal 16-3. But it didn’t stop in the second.

Mark Stone and Max Pacioretty are lethal in Vegas’ transition offense, but usually it’s Stone setting up Pacioretty. This time Pacioretty returned the favor, fluttering a pass over to Stone, who buried it for his 20th goal of the season, the seventh straight year he’s hit that benchmark.

The victory followed a 1-0 loss on Friday. On the second game of a back-to-back this year, the Golden Knights are 7-0-1 with a plus-16 goal differential. Vegas has one set of back-to-backs left this season — next week at home against the Blues on Friday and Saturday.

Coach Pete DeBoer credited the ability to rotate between goalies Marc-Andre Fleury and Robin Lehner when playing on back-to-back days. Lehner started yesterday, then Fleury made 19 saves on Saturday.

“Yes we have depth and we have the ability to play four lines and we have great leadership and the guys know the importance and all that, but I think the top factor on that list is the fact that we have two goaltenders like we do,” DeBoer said.

Saturday was another milestone game for Fleury, who picked up the 489th win of his career to tie Roberto Luongo for third all-time.

He’s 62 wins behind his boyhood idol Patrick Roy for second place, which seemed like a stretch even a year ago that he would challenge for it. Now, playing some of the best hockey of his career, it’d be hard to bet against him, even at 36 years old.

Besides, he didn’t sound like someone ready to hang up the skates.

“I know it’s coming, right? I’ve been lucky to play for a long time,” Fleury said. “ I always thought if still had fun and felt like I could still follow the game and help my team and not be a burden, right?

“I still like doing it. I don’t know what else I can do in life that would give me the same satisfaction as playing hockey and winning games.”