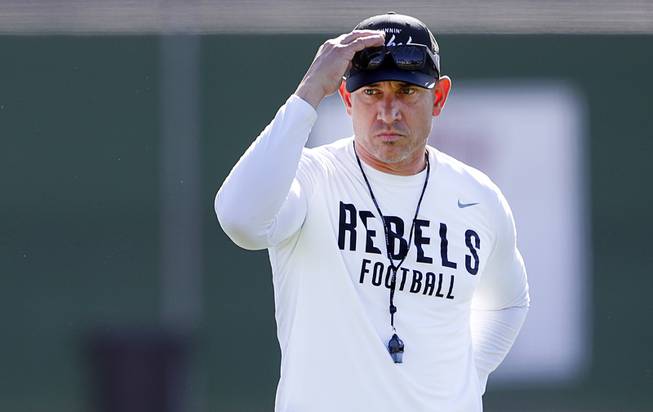 Marcus Arroyo is a largely humorless man. That’s not a bad thing—his job is to win games, after all, not to open for Carrot Top. But that made it seem all the more noteworthy that the second-year UNLV head coach was loose, laughing and generally happy about his team on Saturday as they wrapped up their final spring practice.

The team’s 15th spring session was soaked in good vibes. Family, friends and former players were allowed inside Rebel Park to watch the 90-minute scrimmage, and while players took things seriously on the field, the tone was downright fun.

Adding to the carnival-like atmosphere was an actual carnival game. A dunk tank was installed on the sideline to bring some levity to the proceedings; when the defense got a stop, the players were allowed to select a coach to send to the tank.

Though linebacker Vic Viramontes (a former juco quarterback) missed the target when attempting to dunk Arroyo, defensive back Mychal Victor snuck in and triggered the mechanism anyway to drop him into the water. Arroyo coached the rest of the practice in wet clothes, but with a smile on his face.

When asked to evaluate his performance in the tank, Arroyo even cracked a joke. Stop the presses.

“I’m gonna look at the tape,” Arroyo said. “I think I got sabotaged.”

The tank was Arroyo’s idea, a way to show his team that he was pleased with their work over the past month.

“You’ve got to liven it up a little bit,” Arroyo said. “You’ve got to be able to let guys know that everything can’t be so task-oriented all the time. You’ve got to have some fun with the guys and not take it so seriously.”

Though there’s still four months to go before the start of the 2021 season, as things stand now it looks like sophomore Doug Brumfield will exit spring with the lead in UNLV’s three-way quarterback competition.

As a freshman last year Brumfield got into two games and completed 9-of-21 passes for 151 yards. He didn’t throw a touchdown or an interception but ran for a score.

Brumfield worked with the first and second teams during Saturday’s scrimmage and once again drew praise from Arroyo for the way he commanded the offense.

“Doug has done a great job,” Arroyo said. “Today we mixed him around with a bunch of guys. Twos and ones were mixed up today to get guys different reps, to make sure we got a clean picture of where guys were.”

As for the quarterback position as a whole, expect the battle to continue well into training camp.

Arroyo said Brumfield, junior Justin Rogers and freshman Cameron Friel have all shown progress over the past month.

“They grew fast. Grasped and can do a lot. There’s high expectations at that position…it’s a pretty demanding position. They got a lot of reps for three guys, which is really good. They grew throughout spring.”

On the first day of spring practice, Arroyo declared that his goal was for the 2021 UNLV team to be “unrecognizable” from the 2020 team, which went 0-6 in his first year at the helm. The coaches believe the defense has already made strides toward that end.

The unit that allowed 38.0 points per game (115th out of 128 teams in Division I) looked much improved in the spring, with young players looking more confident and some incoming transfers looking like potential difference-makers.

Arroyo said consistent on-field instruction has helped, and that the experience gained by the young players last year—even in a lost season—has proven helpful.

“Those guys came back out with an air of experience,” Arroyo said. “They understood some things that maybe we didn’t get a chance to teach wholly, but they were out there.”

“This one takes the cake,” Hansen said. “We hit so many situations today. We struggled a little bit in the spring with some of those particular situations, whether it was short-yardage or red zone, and just did a lot better today, obviously. And then continued to shine and continued to keep a mental edge throughout the day. Even when things were going really well, there was never a lull in the guys’ focus. So I’m really proud of how they finished spring.”

With spring wrapped, Arroyo said the coaching staff will pore over all the practice tape, conduct individual meetings with the players, then focus their full attention on the recruiting trail.

Arroyo’s first two recruiting classes were strong, but now he wants to start bringing in some groups that can really dictate the future of the program in a good way.

“Recruiting kicks off big-time now,” Arroyo said. “Now we really dive back into that. We never really stop recruiting, but now we drop the hammer again. I think everyone around here knows we’re pretty serious about recruiting.”

On Thursday UNLV got a commitment from 3-star quarterback Jayden Maiava, a Hawaii native who is the highest-rated QB to pledge to the scarlet and gray in the era of recruiting rankings. Arroyo wants to keep that momentum rolling.

After more than a year of no in-person recruiting due to the COVID-19 pandemic, the NCAA is allowing football camps to resume in June. That will give Arroyo and his staff a chance to get on the road and watch players with their own eyes for the first time in a long time.

“We finally get some in-person evaluations,” Arroyo said, barely containing his excitement. “We’ve barely seen any of the last two classes we’ve signed in person. So it’ll be really nice to see players in person and get some live evals on guys.”