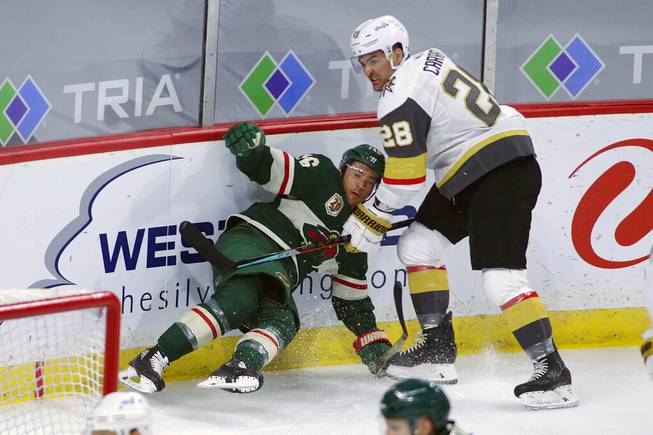 The curse of Xcel Energy Center continued for the Golden Knights on Monday in the most painful way possible.

Vegas led by two goals past the 10-minute mark of the third period, but Kevin Fiala brought the Wild within one, Kirill Kaprizov tied it with 1:32 to go in regulation, and Jonas Brodin stuck in the dagger with 1:05 to play. Vegas lost 6-5 to the Wild, falling to 1-6-0 all-time in Minnesota.

The Golden Knights dropped to 24-2-0 this season in games they led after two periods. Both losses have come to the Wild.

“The rosters or the way they play isn’t a mismatch, it’s just that a team is in another team’s head mentally, and for us you’ve got to fight through that,” coach Pete DeBoer said. “These games, the toughest part isn’t physically recovering, it’s mentally recovering when you lose that way.”

Vegas looked to have the game wrapped up, and DeBoer and players agreed the entire third period wasn’t the problem — only the last few minutes were. Vegas carried over a 5-3 lead into the third and played a nearly flawless first 10 minutes of the third period. They cleaned up earlier defensive breakdowns and held Minnesota to just two shots through in the first half of the period.

The third shot hit the back of the net and triggered Minnesota’s comeback that carried over to the rest of the frame. The Golden Knights even had a chance to put the game away after a delay-of-game penalty by the Wild with 5:31 to go, but couldn’t restore the two-goal lead they had for much of the game.

The third was the only period in which Vegas did not score, allowing Kaprizov’s missile to tie it and set up Brodin’s winner 26 seconds later.

“We’ve got to seal the deal. We’ve got to keep playing the entire game,” captain Mark Stone said. “We had our looks, we played aggressive and then we sat back a bit. I think the momentum swings, those happen when you’re playing in these critical games. Yeah we’ll learn from it. It is what it is.”

Historically, five goals has been a magic number for the Golden Knights. They had never lost in regulation, including the playoffs, when reaching that total, and only a 6-5 shootout loss last season kept them from a perfect mark. They are now 77-1-1.

The problem is when you allow six, which Vegas did for the first time this season and 16th time ever, it’s hard to win. Robin Lehner was in net for the Golden Knights, and the six goals marked the most he had allowed since his trade to Vegas last year, including the playoffs, and tied the most goals he’d allowed in his career.

Lehner battled through the early parts of the game. He lost his stick and was unable to recover in time on the Wild’s first goal, then allowed a rebound to pop out of his glove on the second. He settled in for awhile after that, including denying a breakaway chance in the final minute of the second. Still, he shouldered much of the load in the postgame press conference.

“I should have come up with a couple more saves,” Lehner said. “That’s kind of how it goes sometimes as a goalie. I felt good, I felt like I made a lot of good saves, but I needed to come up with more and obviously I had a couple of bad ones, so I’ve got to figure it out.”

It’s easier to shake off an outing like Monday’s if the Golden Knights didn’t just have one similar to it. In their last game on Saturday against Arizona, the Golden Knights coughed up a two-goal lead and needed overtime to defeat the Coyotes. No harm done then, but Monday’s loss hurt, especially this close to the postseason with Vegas fighting for the West Division title.

Players were disappointed postgame, as would be expected, but they weren’t distraught. They acknowledged that they can’t let games like that slip away, and if Minnesota is a future playoff opponent — the Wild have also clinched a West Division berth — a game like that has the potential to linger in the back of the mind.

“Sometimes it’s a blessing that this happens now before the playoffs so you can take a look at it, both as players and us goalies, can see what we need to sharpen up,” Lehner said. “Sometimes there are nights like this. You don’t want to have them, but it happens. It’s good it’s now and not in the playoffs.”

Vegas Golden Knights get children, families excited for trip to the library