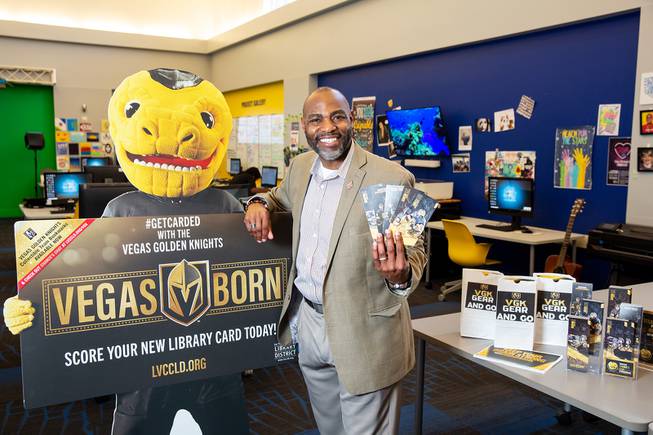 Vegas Golden Knights get children, families excited for trip to the library

A father and his young son arrive at the Clark County Library on Flamingo Road decked out in Vegas Golden Knights gear. The library staff knows exactly why they are visiting.

The boy sees a cutout of Chance, the Golden Knights mascot, and quickly makes his way to a table where staff has assembled a team-themed swag bag. It includes a Golden Knights activity book, stickers, buttons and a coveted bookmark featuring winger Ryan Reaves.

Did you know Reaves, one of the franchise’s most beloved players, enjoys reading “The Rainbow Fish” by Marcus Pfister? The book teaches that sharing brings a smile to the face of others. Reaves also is a fan of streaming movies, including his favorites “Wedding Crashers” and “The Matrix.”

All of these details are shared on his bookmark, of which about 20,000 were printed and distributed at Southern Nevada’s 25 branches in April.

Megan Nykodym of the branch’s Teen Services Department detailed the excitement shared by the father and son as they rummaged around the bag. “The passion (for the team) trickles down,” she said. “They were celebrating together. It was beautiful.”

The partnership between the franchise and library district is a win-win because it’s bringing residents who aren’t regular patrons of their local library in for a visit, library officials said. Many then realize the library does more than rent books — there’s audio books, music (five downloads a week), DVD rentals, internet access, a theater with programming, and even a 3D printer.

“The goal of the partnership with the bookmarks is to bring people to the library so they can see and experience what we have,” said Kelvin Watson, the library district’s executive director.

Watson’s message is simple — this is your library; come visit.

He wants to make their service available to all residents, young or old, and regardless of what part of town they live in. At the Clark County Library, for example, there are high school students doing remote learning in the teen center, jobless residents using the internet to apply for work and plenty of events on tap, especially during the summer when school is on break. Most branches even do storytime for families with newborn children.

Having someone with notoriety — like Reaves or Marc-André Fleury, who is featured on the February bookmark — explain what they like to consume at the library could spark an interest for someone else, Watson said.

“It humanizes them and shows their interest in reading and education,” said Carley Sisolak, the director of marketing and brand for the Golden Knights.

The partnership with the hockey club started in 2019 when the library district launched the Vegas Golden Knights “Vegas Born” library card. It was so popular that lines went from the welcome desk to outside the building with residents looking to switch over their card or become members. Fans visiting from Florida stopped off at the Clark County branch one day for the card as memorabilia, Nykodym said.

When the library and team first brainstormed ideas, the goal was not only to get more residents to regularly read, it was also to get them to visit the local branch, Sisolak said. And judging by the crowd, especially at the first of the month when a new bookmark is released, they’ve accomplished the goal. Alec Martinez is the May bookmark, which debuted Saturday. It’s also available at team headquarters in City National Arena.

Chance the mascot has also made unplanned appearances at branches. He also has a blog, “Chance’s Cat” on the district’s website.

“We can’t keep them in stock,” Watson said of the bookmarks. “We have more people coming to the library. It’s a home run, something to drive people here.”