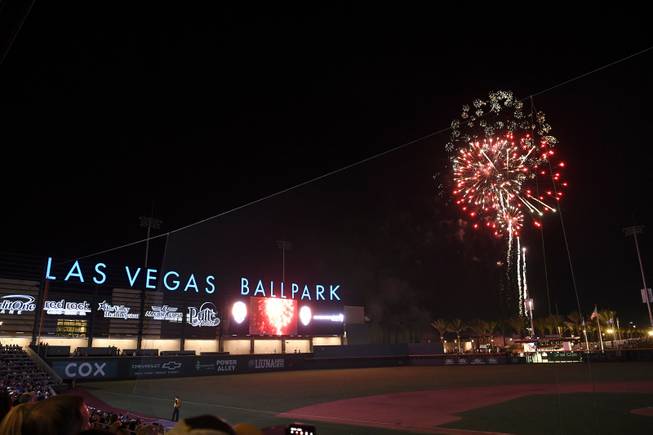 Fireworks light up the sky after the Las Vegas Aviators game against the Reno Aces Wednesday, July 3, 2019, at Las Vegas Ballpark.

The Las Vegas Aviators might need an entire wing of Las Vegas Ballpark to house all the awards and accolades they received in their inaugural season at the venue two years ago.

Ballpark Digest named the Aviators the Team of the Year and Las Vegas Ballpark the Ballpark of the Year, the first time in the baseball-industry awards’ 20-year history that a franchise earned both. Meanwhile, Aviators President and Chief Operating Officer Don Logan took home Baseball America’s coveted Minor League Executive of the Year honors.

Oh, and the actual team went 83-57 to win its Pacific Coast League division in front of a total, seasonlong home attendance of 650,934—most in all of minor league baseball.

“You saw how successful we were and how great of a place this is and how well we fit with the sports scene here with major league sports now,” Logan says. “We’ve really carved out a great situation here.”

The Aviators finally get to rejoin the local sports landscape and defend all their crowns when the second season at their Downtown Summerlin home begins May 6 with a series against the Sacramento River Cats. After many attempts to start and stop amid the pandemic last year, the minor league baseball season was ultimately canceled.

Several teams across the country didn’t survive the financial devastation of a missed season, but there was no doubt the Aviators would return after their monster 2019 campaign. Now the organization’s focus is on picking up where it left off.

“Everyone I talk to is ecstatic about it and really excited to come back out,” Logan says. “It’s really a great feeling.”

Some differences will be noticeable, of course, as the team complies with social distancing mandates, including reduced capacities and mandatory face masks. The Aviators’ pool of opponents will also be shallower after the dissolution of the Pacific Coast League—the franchise’s home since it began as the Stars in 1983 at Cashman Field—to make way for the 10-team, Triple-A West.

Las Vegas plans to compete and emerge as one of the best teams in the new league. Player development often overtakes winning titles as the primary focus of minor league baseball, but Logan says the Oakland Athletics, the Aviators’ parent club, values a steady balance.

“Competitive baseball is good for business, good for the fan base. It’s more fun to watch your team win,” Logan says. “I can tell you that last year when [MLB] did the alternate site setup [for potential call-ups] that they’re doing now, one of the biggest drawbacks to that and one of the biggest complaints from managers was [that] guys coming up from the minor leagues weren’t ready to play, because they hadn’t been playing meaningful games. They hadn’t been playing to win.”

“The A’s don’t do things the way other teams do; their emphasis is always to draft and develop,” Logan says. “That means, as a minor-league affiliate, you’re always going to have a competitive group out on the field, especially at this level. Most if not all of these guys are going to spend or have spent some time around the big leagues, and that bodes well for the product you’re going to see on the field.”

The man leading the roster will also return. Coaching staffs tend to turn over rapidly in the minor leagues, but Fran Riordan will be back to manage the Aviators for his second season.

Riordan also got into the 2019 Aviators’ award parade with recognition, as the Pacific Coast League’s Manager of the Year. The first season at Las Vegas Ballpark was quite literally a banner year for the Aviators, and now they’re out to re-create that success.

“This ballpark is really such a special place,” Logan says. “Now we get to take all the groundwork we’ve laid and put it back into action.”