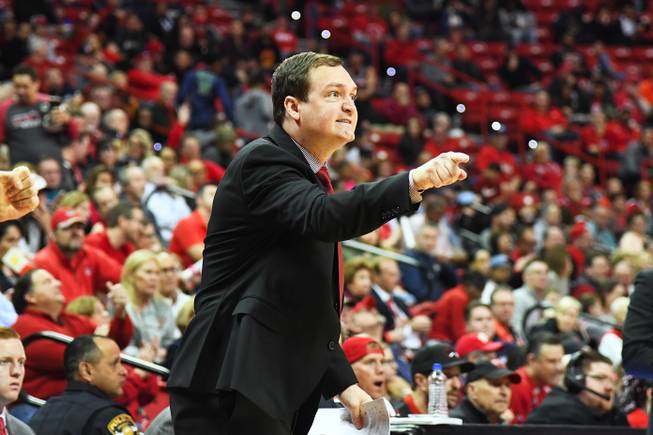 Kevin Kruger, an assistant basketball coach the past two seasons at UNLV, was elevated to head coach on March 21, 2021. Kruger was part of UNLV’s Sweet Sixteen team in 2007. That squad was coached by his dad, Lon.

UNLV got its first offseason commitment from outside the program on April 1. Less than a month later, new coach Kevin Kruger had added seven more players from the NCAA’s transfer portal, completely overhauling the roster and setting the course for what he intends the basketball program to look like under his leadership.

With three returning players, one high school recruit from the Class of 2021 and the eight incoming transfers, UNLV now has 12 scholarships accounted for in 2021-22. That leaves just one open spot before next season begins, and Kruger feels good enough about his team thus far to finally stop and take a breath before filling it.

“It has gone fast,” Kruger said of his first reconstruction project. “It feels like just yesterday we started, but with the portal it seems like a lot happens every day. Guys going here, guys going there, new names in the portal, some guys you don’t expect. Every day is like a new surprise.

“In that final spot, if there’s somebody that comes along or wants to come back that’s a no-brainer to help our team win, then we’ll do that,” he continued. “No doors are really closed at this point. If it helps UNLV, we’ll absolutely entertain it and try to make it happen, but we’re not in any panic to do anything. I don’t think there’s a need that we haven’t addressed. Looking at our roster, I’m really excited about it.”

The two newest players to come on board, transfer guards Mike Nuga and Josh Baker, both of whom committed last week, figure to provide additional scoring punch to the backcourt. Nuga, a sixth-year senior, averaged 17.8 points per game last year at Kent State, while Baker scored 16.6 points as a sophomore at Hutchinson CC.

While Coleman and McCabe are pure point guards, Kruger envisions a system in which his backcourt players function interchangeably. He believes he has enough weapons now to make that approach successful.

“When we were constructing the roster we were just looking for a bunch of guys that can dribble, pass and shoot and make plays for each other and attack advantages,” Kruger said. “In the traditional sense of the point guard, Jordan has obviously played it, Marvin played it here, Keshon’s kind of got that ability, Josh played it a little bit, Justin played it a little bit, Mike played it a little bit. Just in terms of dribbling the ball across halfcourt, I think we’ve got plenty of guys who can do that. But what I think they can all do together is have an ability to play in the pick-and-roll and attack advantages and get downhill and create advantages and opportunities for somebody else. That’s going to be our main pillar offensively going forward.”

Kruger includes his two wing players, 6-foot-6 Nick Blake and 6-foot-6 Donovan Williams, in that group of playmaking guards. Blake was a part-time starter as a freshman last year and flashed big-time ability while posting 6.5 points and 2.7 assists per game. Williams, a former 4-star prospect, averaged 3.3 points in limited playing time in his two years at Texas.

“We want to create an environment offensively where if you can make a play for a teammate, you’re going to be in that position,” Kruger said. “Nick and Donovan might be longer or taller than Justin or Jordan or anyone else, but if things are working in the pick-and-roll, we’re not going to say you have to be this or that [position]. We want everything to flow together and play together. In our mind, those traditional positions, especially the 2, 3, and 4, we want to be able to use those interchangeably.”

In the frontcourt, Kruger believes he and his staff have identified and brought in tough-minded forwards who will provide the backbone on the team’s defense. Though power forwards Royce Hamm (Texas) and Victor Iwuakor (Oklahoma) and center David Muoka (Lamar) don’t have the scoring résumés of some of the transfer guards, Kruger thinks they’ll get the job done on the offensive end.

“I think absolutely they’ve shown signs they can [score],” Kruger said. “I think with more opportunities and more minutes, as their confidence grows I think they’ll be able to.”

Before figuring out what to do with the final scholarship spot, UNLV already looks like a team that will be more athletic and tougher on defense in 2021-22. Kruger is happy about that.

So while he has spent the past four weeks adding players at a breakneck pace, he’s more than content to exercise patience when it comes to the final opening.

“If another player comes along that can help us win, we would absolutely talk about that,” Kruger said. “I think we’ve got a great blend of guys. All guys that have a like-minded approach of competing every day and wanting to win more than anything.”