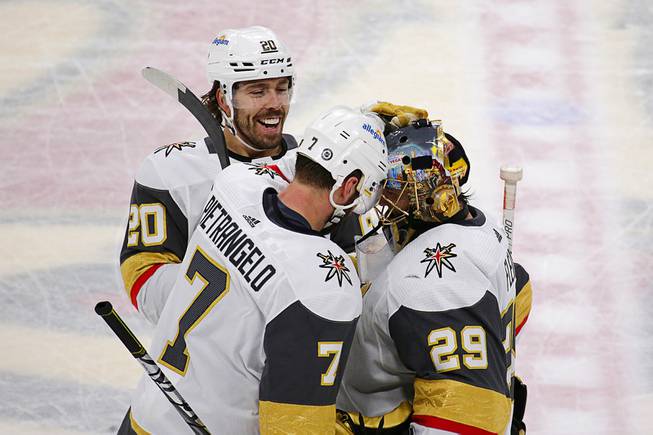 For the second game in a row against the Minnesota Wild, the Golden Knights saw their third-period lead turn into a deficit. This time, though, they staged a comeback of their own to pick up a crucial victory.

Reilly Smith tied the game with 4:16 to go in the third period, then Alex Pietrangelo’s one-timer in overtime finished the transition from good night to bad night back to good night and gave the Golden Knights a 3-2 victory over the Wild at Xcel Energy Center on Wednesday.

“We obviously don’t like getting down at the end of a game, we’d obviously like to be up by a couple, but this is the type of game we can build off,” Pietrangelo said. “We faced a little bit of adversity and we got through it. That’s a good sign here moving forward at this time of year.”

After a physical first period and a defensive second, things opened up in the third. Minnesota rookie Kirill Kaprizov erased his team’s deficit on his own, batting a puck out of the air at 11:13 and snapping it home off the faceoff at 13:23. It turned Vegas’ 1-0 lead into a 2-1 Wild advantage, quite similarly to how Monday’s game ended.

This time, though, Vegas fought back. The Golden Knights went on the power play soon after Kaprizov’s second and came up with one of their biggest goals of the season. With one second left on the penalty, William Karlsson touched a rebound to Smith at the back door, and Smith fired it home to tie the game.

“It seems like when we play this team there’s a lot of momentum swings and a lot of them haven’t worked out for us too well, so it was nice to be able to battle back tonight,” Smith said. “But when those things happen, you can’t let them snowball like we’ve done in the past couple of games against Minnesota.”

That set up the extra period, where Pietrangelo became the fifth Golden Knight to score an overtime goal. Vegas improved to 8-0 in games decided in overtime (1-2 in the shootout).

The Golden Knights snapped a five-game losing streak against the Wild this season and picked up their second win all-time at Xcel Energy Center (2-6-0).

“Since Vegas (started), we haven’t had much success here in Minnesota,” goalie Marc-Andre Fleury said. “Everybody contributed to that win and it was a good feeling in the locker room.”

Fleury’s victory was the 490th of his career, moving him into sole possession of third place on the NHL’s all-time list.

The first period was the embodiment of the “I went to see a fight and a hockey game broke out!” meme. The teams combined for 30 penalty minutes, six roughing minors and one fight in the opening 20 minutes alone.

The biggest skirmish came 9:44 into the game when Nicolas Hague hit Kaprizov into the boards. Marcus Foligno jumped at Hague to defend his teammate, and Whitecloud and Kaprizov wrestled each other to the ice.

Once Hague and Foligno came out of the box, they threw down the gloves for the first fight of Hague’s NHL career. One more set of coincidental roughing minors between Brayden McNabb and Ryan Hartman ended the first period, and both sides settled down the rest of the way.

Monday’s game was about as bad of a loss as a team could have and it was clear Vegas was still frustrated. Though coach Pete DeBoer pushed back on the idea that the chippiness carried over from the last game.

“You’ve got two teams that are potentially going to see each other in the playoffs, potentially seven times,” DeBoer said. “I don’t think that anybody wants to take a step back from anybody and send the wrong message.”

The Golden Knights, and their defense in particular, were terrific in the second period, holding Minnesota to eight shots and nothing dangerous.

The Vegas defense even led to the lone goal of the second. Mattias Janmark took the puck from Matt Dumba in the neutral zone and entered the zone on a 2-on-1 with Chandler Stephenson. Janmark flipped the puck over and Stephenson one-timed home the first goal of the game at 8:30, his 13th goal of the year and Janmark’s fourth point in 11 games with the Golden Knights.

Then came a Wild third period, where Vegas lost a lead and allowed the opponent to tie it for the third game in a row going back to Saturday in Arizona. Over their last four third periods, the Golden Knights have been outscored 9-1. In all other third periods this season, Vegas has outscored opponents 63-33.

The regular season series with Minnesota is over, with Vegas finishing 3-4-1. There remains the possibility that they meet next week in the playoffs, and if Colorado wins the division, that’s exactly what will happen.

The Golden Knights treated this one like the playoff game it will be if these teams meet again. It felt like a playoff game, and Vegas pulled out the kind of gutsy effort that wins games in the postseason.