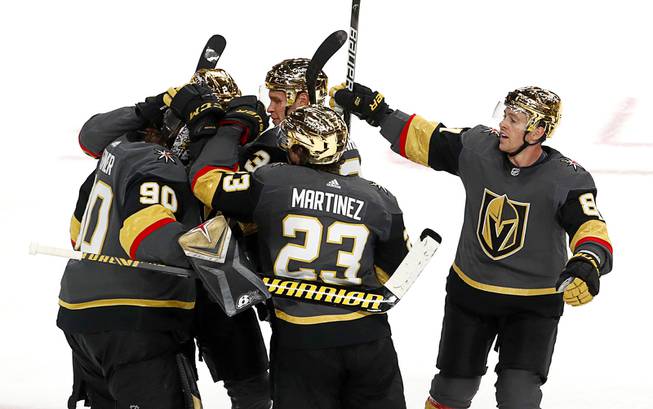 Vegas Golden Knights center Jonathan Marchessault, right, joins teammates as they celebrate their win in overtime during a game against the St. Louis Blues at T-Mobile Arena Friday, May 7, 2021.

The Golden Knights entered the season with a sub-.500 record against the Blues. And St. Louis was the lone team Vegas hadn’t recorded a regulation victory against in the franchise’s three previous seasons of existence.

It’s been a different story this season as Vegas is 5-1-1 against the Blues, including an overtime thriller last night. And while the Blues might be the first-round payoff matchup, the Golden Knights need to finish the regular season series first, which they will do when the puck drops at 7 p.m. at T-Mobile Arena.

If the standings hold through the rest of the regular season, the Golden Knights will claim the top seed in the West Division and the Blues will be fourth, setting up a first-round date with the first two games at T-Mobile Arena. The playoffs do not have a firm start date, but are expected to begin next weekend.

Marc-Andre Fleury is expected to get the nod for the Golden Knights, who are still fighting for first place in the West and for the Presidents’ Trophy as the top team in the league. Fleury is 2-1 this season against St. Louis, including stopping 34 of 35 shots in a victory on March 13.

The Blues are in an interesting position, in that they don’t have anything to play for in the standings. They are locked into the fourth seed, and cannot move up or down regardless of how they play over their final games. St. Louis did not have a morning skate Saturday, but could turn to backup goalie Ville Husso for the second game of a back-to-back.