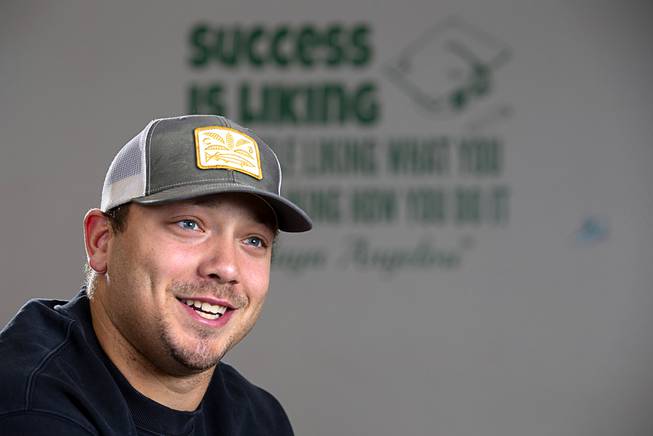 The Bay Port High football team in Green Bay, Wis., had local royalty as a special guest for its homecoming game in 2013.

The Packers’ Aaron Rodgers was in attendance and couldn’t help but get drawn into the performance by Alec Ingold, the Pirates’ then star junior quarterback. Ingold, now a fullback for the Raiders, will always remember sneaking a glimpse of Rodgers after he threw a touchdown pass.

“I saw him throwing his hands up celebrating the touchdown pass and that meant the world to me,” Ingold recalled.

Some of the most thrilling moments of the now 24-year-old Ingold’s adolescence were when he encountered Packers’ players around his hometown — having receivers Donald Driver and Randall Cobb speak at his schools, for instance, or even running into them at the grocery store. He now actively tries to “pay it forward” by doing the same thing in Las Vegas.

Since the Raiders officially relocated to town last year, he’s been one of the most visible players in the community. Ingold visited elementary schools pre-pandemic, spoke to high-school football teams allowed to practice at Allegiant Stadium recently and has now partnered with Junior Achievement of Southern Nevada to share his passion and expertise in finance.

Among his initiatives with Junior Achievement has been launching the “Alec Ingold Mini Money Camp,” a 14-part virtual series offered to eighth through 12th graders originally intended to be available until the end of the school year. Positive feedback and demand extended the program until the end of the summer.

He’s also a keynote speaker for a new virtual career fair available to local high school students and looks forward to getting back into schools once coronavirus restrictions are eased. Ingold’s desire to share his knowledge started last summer when he began to more fully comprehend the wage gap in America through speaking with teammates during times of strong social unrest.

“We had a lot of discussions as a team relating to the national anthem and all the tension going on racially and economically in our society with George Floyd and everything,” Ingold said. “It was a lot of guys from a lot of different backgrounds, and to see how much financial literacy came up in those conversations, I found out there were a lot of guys who were never taught how to handle their money, manage their money.”

As someone with a personal finance degree from the University of Wisconsin, Ingold knew he could make a difference. He started asking around town and making his intentions known before eventually coming into contact with Michelle Jackson, the president and CEO of the local Junior Achievement wing.

It didn’t take long on their first call together for Jackson to realize Ingold’s vision was a match for her organization’s existing initiatives.

“As soon as he told me that other players on the team always asked for his financial advice, I knew,” she said.

Ingold has been far more hands-on with the programs than typical celebrities and well-known figures who endorse them, Jackson said. He recruited a slew of teammates like quarterback Marcus Mariota and receiver Hunter Renfrow to record portions of the money camp and has scheduled meet-and-greets with students.

Ingold said he’s been able to connect with the teenagers through sharing his own experiences — ones they may be able to relate to better than those from some professional athletes. Professional football was far from a sure thing for Ingold after he graduated from college.

Ingold was set to become a salesman for software company Oracle, even getting assigned a start date in the summer of 2019. He called the company to request pushing it back after he got an invite to Raiders’ training camp. Then he called to forfeit the job once he made the team.

“It was a backup plan for sure, but it helped me cut it loose on the football field and say, ‘I’m going to give this my best shot because it’s plan A and if it doesn’t work out, then I’ve got a job at Oracle,’” Ingold said. “I had to walk the walk. High school kids have the best B.S. meters in the world. They can tell what’s real and what’s fake, and I’m able to tell them, ‘This is what happened in my life.’”

It’s hard to imagine Ingold doing anything else now with how much he’s come to represent the Raiders in only two years with the franchise. A week ago, he announced two of the team’s picks at the NFL Draft in Cleveland — third-rounders Malcolm Koonce, an edge rusher out of Buffalo, and Divine Deablo, a linebacker from Virginia Tech.

He was the organization’s nominee for the Walter Payton Man of the Year award this season, in which he also played an expanded role on the field. Ingold caught 12 passes for 110 yards and a touchdown, the first Allegiant Stadium history, this season as well as played half of the Raiders’ total snaps on special teams.

He’ll be in the final year of his rookie contract going into the upcoming season, but that hasn’t made him hesitate to embrace Las Vegas as his home.

“To be an NFL football player in a new city where kids haven’t had the experience I grew up with yet, I want to be that person for them,” Ingold said. “I want to be able to go to the schools and talk to these kids. It might be the same information their parents and coaches are giving them but if it’s coming from a different source, from my teammates and coaches, it can spark imagination and perk their ears up a little bit.”

Job hunts, credit scores and retirement plans might not be the most riveting subject matter for teens but Ingold hopes his passion and profile helps it sink in a little more. Maybe it can also help with inequality and give someone the same type of confidence boost Rodgers and others once provided him.

“This isn’t a one-year, one-semester thing,” Ingold said. “We want to build this thing out to see sustainable change. We will keep working to keep changing it, modifying it, improving it, developing it into the best it can be, and I think it’s going to be something special for sure.”