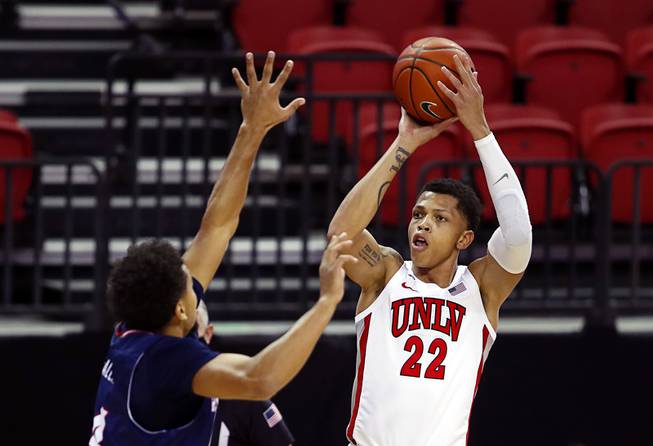 UNLV Rebels guard Nick Blake (22) puts up a shot during a game against the Fresno State Bulldogs at the Thomas & Mack Center Wednesday, Feb. 24, 2021.

Projecting a UNLV roster has never been more difficult than it is this offseason, as the team is nearing the finish line on a total rebuild that will see 10 newcomers join the program in the span of a couple months. And many of the incoming players do not have long track records, making it even harder to predict how things will come together in 2021-22.

Imagine a jigsaw puzzle, but with blank tiles. That’s kind of what I’m working with here.

So why do a roster projection now, before the final scholarship spot has even been filled? Because there is enough information to make some educated guesses as to what the product on the floor is going to look like in Kevin Kruger’s first season as head coach. Kruger has given some hints about the kind of team he wants to build and the style he wants to play, so reasonable assumptions can be made about the lineup and rotations he might use.

It will also be interesting to do a projection now, and then compare it to the projection that comes after I’ve had a chance to review game footage of all the newcomers as part of the Sun’s Recruit Breakdown series. This roster projection version 1.0 will make a good baseline to reference later in the offseason.

Nuga averaged 17.8 points in his lone Division-I campaign last year and was efficient in doing so, shooting 50.0% from the floor and 38.5% from 3-point range. UNLV will likely need his firepower on the court, even if it comes at the expense of a “true” point guard.

UNLV did add a pure point guard in the offseason, signing Jordan McCabe as a transfer from West Virginia, but based on Kevin Kruger’s recent comments about the kind of offense he wants to run—a system where multiple ball-handlers take turns trying to get downhill into the paint—it seems like the team may not need a natural playmaker running the show at all times. That allows a scorer like Nuga, a 6-foot-2 transfer from Kent State, to start at this spot.

While Webster did most of his work from beyond the arc at Hawaii (37.8 3FG% in 2020-21), he flashed an underrated ability to put the ball on the floor and get to the basket, as 29.9% of his shots came around the rim according to Hoop-Math.com. That was a higher rate than any UNLV guard last season.

UNLV can use someone with that kind of hard-charging playing style, as Kruger has indicated that he wants his guards to drive downhill and get the ball into the paint on every possession. Webster has the skill set (and the attitude) to do that.

Baker gives UNLV three starting guards with similar profiles—6-foot-2 or 6-foot-3, all knockdown shooters (Baker hit above 40% in each of his juco seasons) and all capable of initiating the offense to some degree. That speaks to the interchangeability that Kruger wants out of his lineup.

There’s a strong possibility Kruger will want to set a defensive tone with his starting lineup and will therefore go with real power forward such as Victor Iwuakor or Royce Hamm at this spot. But with David Muoka lurking at the rim to block shots, UNLV can afford to play a swingman here in an effort to get more ball-handling on the floor.

Blake and incoming transfer Donovan Williams could both fit that role, but Blake is the sole rotation player from last year to return, so that has to mean Kruger feels good about him and his development.

Defense is Muoka’s calling card. He was named Southland Conference Defensive Player of the Year in 2020-21 after averaging 8.7 rebounds and 3.3 blocks in league play, and seeing as how he’s following former Lamar assistant Brandon Chappell to Las Vegas, it stands to reason he’s got a solid lock on this starting position.

McCabe has a ton of DI experience and he knows how to run an offense, and if anyone appreciates those traits it would be Kruger. But McCabe doesn’t bring much shooting to the table and his steady hand at point guard could be just as useful operating the second unit.

If there’s anyone on the roster oozing with physical potential it’s Williams, a 6-foot-6 swingman with pterodactyl arms and explosive above-the-rim ability. Imagining him developing into a defensive stopper must make the coaching staff drool, but he has been a non-shooter to this point of his college career (21.9 3FG%), and it’s difficult to play starter’s minutes on the perimeter with those percentages.

Iwuakor was projected to be a defensive difference-maker coming out of high school in the Class of 2019, but he never got much of a chance to show it at Oklahoma (9.7 minutes per game over two seasons). At 6-foot-7, he could bolster the rim protection alongside Muoka or by himself as a center in smaller lineups.

A former 4-star recruit, Hamm never developed into more than a defense-and-rebounding reserve during his time at Texas. The fifth-year senior will bring a lot of experience to UNLV in a potentially expanded role.

Coleman caught a tough break last year. The former walk-on fought his way to the starting point guard job, only to suffer a season-ending shin splints. Now Kruger has loaded up on experienced guards and Coleman will have to battle for playing time once again. Don’t count him out, but coming off a difficult injury a spot in the rotation is not guaranteed.

In a perfect world Brown would have redshirted last year, but once the NCAA announced that the season wouldn’t count against players’ eligibility, that became unnecessary. Brown is 6-foot-8 and bouncy, but still needs time to develop into a contributing player. The presence of veterans like Hamm and Iwuakor should help him in that regard.

Gilbert didn’t get a lot of attention as a recruit, as he initially slotted behind Zaon Collins and Arthur Kaluma in UNLV’s incoming class. Now he’s the last man standing. Gilbert is a nice prospect in his own right, but with this veteran backcourt it’s going to be tough for a true freshman to break into the regular rotation. If Gilbert manages that, it means his development is going very, very well.

UNLV still has one scholarship spot left, and Kruger has taken a measured approach to filling it. After laying out the projected lineup like this, it looks like the most skill set the team is missing is that of a scoring forward, as the current collection of frontcourt players combined to average just 2.4 points per game last season.

Kruger might also want to add a hard-nosed, defensive-minded point guard to harass opposing ball-handlers. Gilbert could grow into that role eventually, but as of now it doesn’t look like UNLV has that type of player on the 2021-22 roster.