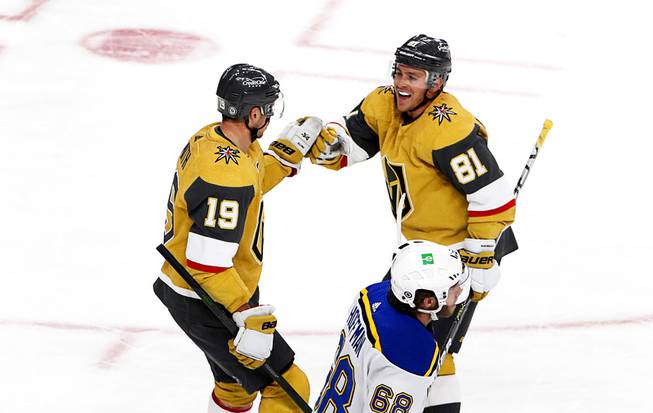 If the Golden Knights’ first-round opponent in the playoffs is indeed the St. Louis Blues, they can look at Saturday night’s performance and feel like they have an edge.

Vegas held the Blues to just eight shots through the initial two periods — none in almost 16 minutes to open the game — and Reilly Smith provided the offense with his first career hat trick in a 4-1 win at T-Mobile Arena.

The Golden Knights are scratching and clawing in the final games of the regular season not only to win the West Division, but also the Presidents’ Trophy as the league’s best team. That would guarantee Vegas home ice in every playoff round.

“We’re trying to get home-ice advantage so finishing first in the league guarantees we get it every round,” forward William Carrier said. “We’re trying to push and the big thing is getting ready for the playoffs. You don’t want to walk in there and have your game kind of lazy.”

If the standings hold true — Vegas leads Colorado in the West with two games to play — the Golden Knights would likely see St. Louis again next weekend to open the postseason.

And while tonight’s game could be considered an anomaly — the Blues clinched a playoff berth Friday and cannot move up or down in the standings — it doesn’t take away from a thorough beat-down from the Golden Knights.

They were spectacular defensively, keeping St. Louis not only out of the scoring areas of the ice, but out of the Vegas end altogether for large stretches. St. Louis didn’t register a shot on goal until there was 4:04 left in the first period and finished with three shots for the initial frame.

The second period was more of the same. The Blues did score off a turnover, but didn’t get a shot until 7:34 into the period and finished with five shots — or eight through the first 40 minutes.

“To hold a team in the NHL to six or eight shots through two periods is a testament to how well you’re playing defensively and we did and still put a lot of pressure on offensively,” Vegas coach Pete DeBoer said. “So it was a lot of good stuff.”

Smith was the star of that offensive pressure, finishing with the three goals on a team-high seven shots on goal. He’s scored five times in his last three games to bring him to 14 on the year.

His first goal was a back-hander on net that went off a Blues defender and past goalie Ville Husso. On his second goal, he stuffed the puck into Husso’s pad and put home his own rebound. His third goal was an empty-netter.

Golden Knights players often talk about getting in close to the net and doing the dirty work to get the goals. That’s what Smith did, and he came away with a trio of goals.

“I’ve been putting the puck on the net all year, it seems like it hasn’t been until the last five or six games I’m starting to get some bounces my way,” Smith said. “It’s just nice to finally get some bounces and it’s coming at the right time.”

His current hot streak has helped put the Golden Knights on the cusp of their third division title in four years as a franchise. A win Monday against the Avalanche would do that, while a loss would require some other scenarios to come true in order to clinch.

That will be, in terms of impact on the playoffs, the most important regular season game in Golden Knights history. Vegas was pleased with Saturday’s win of course, but mostly deflected questions about a potential first-round series with the Blues, knowing it would have to get through the Avalanche for that to happen.

“We talked a month ago about making sure that when we got Colorado to town at the end of the season that that game meant something and we had to do an awful lot of work over the last four, five weeks in order to make that happen and we did,” DeBoer said. “We’ll worry about the playoffs after Monday night. Right now that’s the biggest game of the year.”