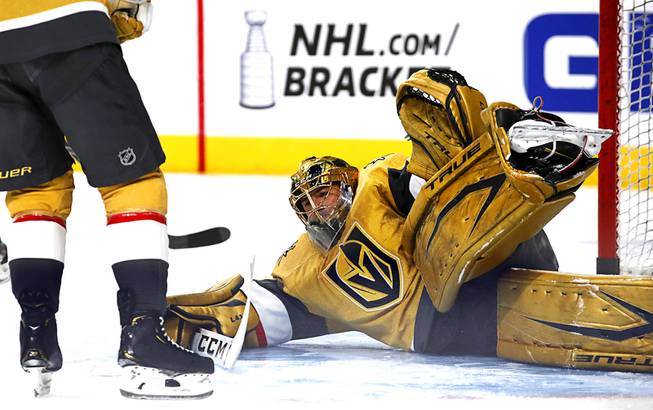 Vegas Golden Knights goaltender Marc-Andre Fleury (29)blocks a shot on goal during warmups before a game against the St. Louis Blues at T-Mobile Arena Saturday, May 8, 2021.

Goaltender Marc-Andre Fleury is the Golden Knights nominee for the Masterton Trophy, given annually to the player “who best exemplifies the qualities of perseverance, sportsmanship, and dedication to ice hockey,” the league announced today.

The award is voted on by the Professional Hockey Writers Association, with each local chapter selecting a nominee. Finalists will be announced during the postseason, and the winner will be decided with the rest of the NHL awards.

“Everyone has been through a lot during COVID and that has certainly created some challenges that all players have had to persevere through this season,” Fleury said. “I’m humbled to represent Vegas and be included with the rest of the nominees.”

Fleury went through struggles on and off the ice last season and has rebounded to turn in one of the best campaigns of his career this year.

Fleury lost his father, Andre, in late 2019 to lung cancer, and he left the team for about two weeks to be with his family.

When he returned, he struggled on the ice, posting a .894 save percentage in the remaining 29 games of the regular season, well below his career average of .913. He played only four of the Golden Knights’ 20 postseason games. Trade deadline acquisition Robin Lehner played goalie the bulk of those games.

This year, though, Fleury has returned to his All-Star form. Through 35 games, he has a .927 save percentage, which would tie the career-best mark he posted in his first season with Vegas. He also has five shutouts, which is tied for third in the NHL.

Past Golden Knights nominees for the Masterton Trophy have included Shea Theodore, Ryan Carpenter and Brad Hunt. Lehner won the award in 2019 when he was with the Islanders.