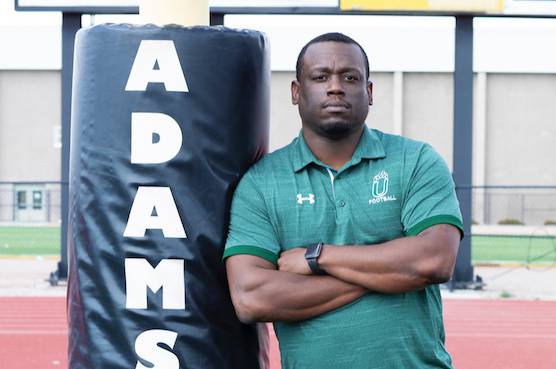 Jarrell Harrison’s job offer wasn’t great: $400 a month, many 16-hour days and crashing in the spare bedroom at a friend’s house to make it work.

Yet, when he received the phone call in 2016 to become a graduate assistant in the football program at Division II Adams State in Alamosa, Colo., the Las Vegas native didn’t have to give it much thought.

Harrison had unsuccessfully applied to dozens of other universities, hoping to get his break into collegiate coaching, and knew this offer was the best chance to start in the industry.

He was coaching running backs at Las Vegas High when offered the entry-level position and had about $300 in his bank account — just enough for a one-way ticket to Adams State.

“It was a chance to coach college football. I was sold,” he said.

And Adams State was quickly sold on Harrison, whose full-of-energy approach helped him carve out a niche with players. Five years later, the 34-year-old Harrison has ascended the ranks to head coach, having been elevated to the top spot last month.

“I genuinely care about all of these players,” he said. “I’m everything these guys need me to be. I coach these guys hard, but I love these guys hard. Ultimately, I am a teacher, a teacher of football and life.”

Harrison, a few weeks after leading Palo Verde High to the 2004 Nevada state championship, took a recruiting visit to UNLV. His host was Jay Staggs, the Rebels’ standout defender.

They instantly hit it off.

Recruits went to New York-New York to ride the roller coaster and play games at the now-shuttered ESPN Zone Las Vegas. Staggs saw what made Harrison, a quarterback and Nevada’s unquestioned best player, a winner.

“After everyone left, he wanted to stay and play-out the leftover tokens,” Staggs said. “He’s a highly competitive dude, and was going to have the top score at basketball, bowling or whatever it was.”

Harrison wound up attending San Francisco City College, where he was converted to a safety and became a junior college All-American. He transferred to Missouri and was a two-year starter for the Tigers, who were ranked in the top 10.

When he got done playing, Harrison knew coaching would be next.

“I always took pride in being the smartest player on the field,” Harrison said. “My teammates would always tell me that I was a leader and that I could relate well with guys. This job was my calling, it was just about getting a chance.”

His first break came by landing on the football and basketball staff at Las Vegas High, which had established coaches in football’s James Thurman and basketball’s Jason Wilson. Each gave him freedom to learn on the job.

“Coaching felt so different than playing because you were putting kids in the position to make plays and have an impact on their life,” Harrison said.

Staggs, after a brief professional career, also started breaking into the coaching ranks as a graduate assistant at UNLV. When Timm Rosenbach, formerly the UNLV offensive coordinator, became the Adams State head coach, he brought Staggs along to coordinate the defense.

When Staggs had an opening for a graduate assistant, he knew Harrison would be a great fit. The offer was more than free schooling toward a graduate degree and a small stipend. Staggs also opened his home to Harrison.

Harrison became such a part of the family that Staggs’ daughters affectionately call him “Uncle Drowl” — short for Jarrell, which his youngest daughter couldn’t pronounce.

“There was a push from me and my wife that you are part of this family,” Staggs said. “We wanted to make sure he didn’t feel like a burden and that he could chase his dream.”

Harrison broke down film, met with players, attended graduate school and got invaluable mentorship from Staggs. He also got a second family.

“He was that family member we were missing,” said Staggs, who now coaches at Faith Lutheran.

Harrison received a text message the day of his introductory press conference at Adams State two weeks ago from Darwin Rost, his football coach at Palo Verde, “telling me I was going to do great.”

Much of his coaching style comes from Rost, who built the Palo Verde program into a state power over nearly 20 years, and Panthers basketball coach Phil Clarke. Harrison was a two-sport star at Palo Verde, leading the team to the 2004 state basketball championship as a junior, and six months later the football championship over Las Vegas during his senior year.

“Everyone loved playing for them,” Harrison said. “Coach Rost was hard-nosed. He’d go hard at you in practice, and then loved you up afterward. Coach Clarke didn’t take any mess. If you didn’t play hard, you were going to come sit next to him.”

Harrison remembers walking into the football meeting room the week of the state championship game and seeing the simple message Rost wrote on the dry erase board in all caps — “WIN.”

“I have taken that mentality with me everywhere,” Harrison said. “A lot of what we did (at Palo Verde) I am still doing now, in terms of managing the program.”

Josh Blankenship suddenly left Adams State in January for a job in Texas, meaning the university had to scramble to fill the vacancy at the height of the recruiting season. They pegged Harrison on an interim basis.

But Harrison didn’t look at himself as keeping the seat warm for someone else. He was out to prove he could handle the job.

“I was really confident in the fact that I knew the place and that I had helped recruit a majority of the kids on the roster,” Harrison said. “I understood that there are a lot of qualified coaches out there, so I had to focus on what I could control, and that was getting the team to be the best they could be.”

That effort caught the eyes of officials, who in announcing his hiring raved about how Harrison connects with players.

“He is a high-energy individual who believes in shaping the lives of these young men,” said Katelyn Smith, the Adams State athletic director, in a news release. “His passion, dedication and enthusiasm will continue to be an asset to this campus, our department and this program.”

In recruiting, Harrison pieced together a strong class with bounce-back players from Alabama, South Florida, and quarterback Marckell Grayson from UNLV. There’s about 10 Las Vegans on the roster — Jamaal Evans, Bryce Hampton and Aaron Johnson from Centennial among them — and the area will always be a stop on the recruiting trail.

Like any coach, Harrison’s ultimate goal is to advance through the ranks to a larger program. But that’s not top-of-mind right now. Rather, he’s focused on battling league powers Colorado School of Mines and Colorado State University at Pueblo.

“We will be competitive with how we recruited,” he said.